close menu
Well! So much for good rest! Our room is on the corner and has two windows on two walls. As it had been very warm all day, it didn’t occur to any of us to close at least one set of windows. It also didn’t occur to any of us during the night to do so! When we awoke slightly blue around the edges we bemoaned our stupidity loudly before setting off at speed (partly to warm up, partly because we were later than planned!) to the Vatican City and the Vatican museum.By the time we arrived there we already tourbuses full of people cueing up for entry to St. Peter’s, so we decided to chance going to the museum (wherein lies the Cistene Chapel) first. This turned out to be a very good move, as there was no queue and the crowds inside were light. 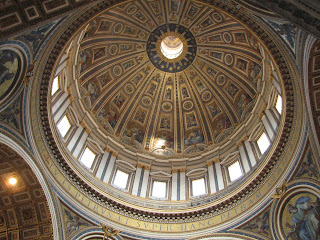 Having been there before, Martin and I first went to the ‘side’ exhibitions of statues, paintings, friezes and so on before going through all all the passages laid out with different themes that lead eventually to the Chapel. There are passages with Romantic wall hangings, Cartographic (old maps) wall hangings, statues, woodwork, jewellery and much more, but they all have highly ornately done ceilings, many painted by master painters. It truly is an amazing experience, but beware! The price of truly appreciating these great works is a very stiff neck!

Just before we entered the Chapel, there were various galleries with more modern art. Three Dali paintings depicting Jesus were among those in the gallery. I did take photos of them,
but as flash photography is prohibited and that specific gallery had its own guard, they’re not great pictures! 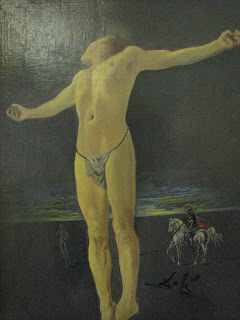 We met up with Edu and Simryn and went into the Chapel where we promptly lost them again, misunderstanding which exit we’d be taking. We communicated by sms (txt) and realised that we had left the building and they had not!

We walked back to the entrance and as Martin says “sometimes it is best to let a frantic looking woman ask”. As it turns out you can only enter once and that’s final! Sending in me with my ‘we’ve lost our friends’ helped and the friendly, Italian guard let us in. As it turned out, our fast walk back towards the Chapel revealed a whole section we had missed, so we went through there before going in to St. Peter’s Basilica.

This is another place Martin and I have been before, so we went in to the crypts rather than the Basilica which provides an amazing view down on to the inside of the church and also the roof which has magnificent views of the square and the Vatican gardens.

The crypts contained many year’s worth of deceased Popes including John Paul II. People were kneeling at and praying at his tomb, which I found a little eerie, but I’m sure it meant a lot to them.

From the crypts we climbed the stairs to the main building. As a work of art, St. Peter’s is an amazing structure, tall, beautifully decorated with angels, crosses, saints and Jesus, ornate and rich in presentation, but it does lack in feeling like a church with people walking around talking, taking photographs and tour guides one speaking louder than the other. It is a magnificent structure though!

We left the Vatican and with it Rome, boarding a plane to Venice. We arrived quite late and after dark so after checking in we went for a quick stroll around to familiarise ourselves with the area.. Tomorrow will be a busy day with an early rise so early to bed for us!