I’ve been struggling a lot recently with the fact that us mamas have to multitask, while the dads seem to find it a little harder, to say the least!

I can cook a full dinner, put on a wash, hang up the washing and wash a few dishes all while my daughter toddles around the kitchen amusing herself with her toys, hangs off my legs, cries to be picked up and generally goes about her day. I’ve even been known to pop her on the counter to breastfeed while I’ve been cooking.

Yet my husband â€“ and I recognise that I am criticizing a man who is in the kitchen making dinner and will do the washing up after, so I really don’t have that much to complain about â€“ finds it more difficult to cook whilst looking after Ameli.

It’s made me wonder about this supposed multitasking thing that we do as women. 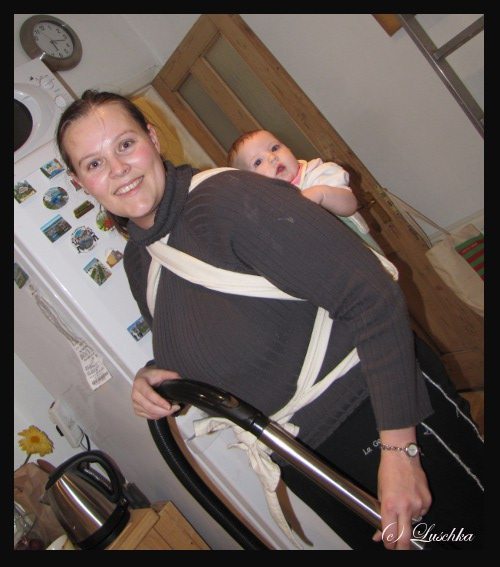 While I’m making sure the chicken doesn’t burn, am I really paying much attention to my daughter? I know enough to know that she is not pulling the kettle down on herself. I know that she’s safe and I have a general awareness of where she is despite having my back to her.

I allow her to open the cupboard and I allow her to bang her finger in the door â€“ because we have soft close doors. I wouldn’t slam it. I allow her to touch the oven, to feel that it’s hot and to pull away. I even allow her to tug on the washing line knowing full well it’s going to fall down on her, and when it does I catch it so that it doesn’t actually land on her, just frightens her enough to know not to tug on it again (till tomorrow, at least).

I’m always aware of what she’s doing, but my attention is split between her and the chicken and the water running in the sink.

With her father though, the attention she gets is undivided, more or less. He is so focused on what she is doing, that the same meal might take him twice as long to prepare. He spends much more time talking to her, drawing her back to her play area and trying to get her to play with her toys â€“ or the favourite kitchen laundry basket.

In the end, we still have dinner on the table, and the hours pass, but I can’t help but wonder at the end of the day, which experience has taught her the most, or meant the most to her.

Or does she benefit from both, gaining different experiences from our different approaches?

What do you think?

Babies Don’t Listen To Experts
News Of The Week: Forced Adoption And Conditional Love
Benefits Of Baby Massage On Different Regions Of The Body
Motherhood And Unconditional Love