By paying attention to changes in cervical mucus (CM) and tracking basal body temperature (BBT), women can quite accurately know when they are ovulating. The FA method works best for women who have regular cycles (which don’t vary a lot in length from month to month) and also who have no other concerns when it comes to their reproductive health (like PCOS, trouble with infertility, etc).

Another awesome guest post today, this time from the amazing Amy, a work from home Momma to one fabulous son, Daniel. Amy writes about the things she holds close to her heart: family, delicious food, and many aspects of natural parenting. She is passionate about natural childbirth, breastfeeding, gentle, intuitive parenting, and respecting all people, no matter how small. She’s figuring it all out as she goes, following her instincts with her son as her guide. Amy writes at Anktangle. Today, she shares with us her experience of Fertility Awareness as a means of contraception and family planning.

My first exposure to Fertility Awareness (FA) as a method for planning or preventing pregnancy was through attending Catholic school starting in sixth grade. Part of my health education in high school was to learn about the female reproductive cycle and how to read and interpret its signs to help prevent unplanned pregnancy, or to achieve pregnancy when desired (after marriage, of course). 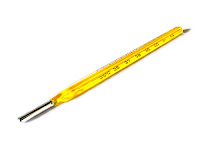 The Fertility Awareness method is also called Natural Family Planning (NFP), but it is not to be confused with the Rhythm Method, which is what people usually think of when they hear this method mentioned. Unlike FA or NFP, the Rhythm Method is a completely calendar-based method which assumes every woman has a 28 day cycle. It uses counting the days of the cycle to know when to abstain from intercourse (during the assumed fertile time) in order to prevent pregnancy.

When I learned about Fertility Awareness in depth in nursing school, I was completely fascinated by the fact that simply by paying attention to changes in cervical mucus (CM) and tracking basal body temperature (BBT), women can quite accurately know when they are ovulating. The FA method works best for women who have regular cycles (which don’t vary a lot in length from month to month) and also who have no other concerns when it comes to their reproductive health (like PCOS, trouble with infertility, etc).

Other Benefits of the Fertility Awareness Method Include:


Fortunately, whether you’re trying to avoid or achieve pregnancy, the technique is the same: monitor BBT once per day (when you first wake up in the morning, before getting up) and notice changes in cervical mucus throughout your cycle. If you are trying to avoid pregnancy, you will need to either abstain from intercourse or use a backup contraceptive method (like a barrier and/or spermicide) during your fertile time. If you are trying to achieve pregnancy, FA will help you to know when you are ovulating, which is the best time to have intercourse if you want to get pregnant.

The changes in CM and BBT are all due to various hormonal shifts in the body. Here’s a representation of the ups and downs of different hormones throughout the cycle (Credit: Early-Pregnancy-Tests.com):

Keep a thermometer and a BBT chart (or a pad of paper and a pen) by your bed. (Here’s a free, printable BBT chart from Baby Center, or if you want to use an easy online source, I can recommend Fertility Friend.) When you first wake up, take your temperature and write it down (or chart it). Always take your temperature via the same route (whether you choose orally, rectally, or vaginally) to get consistent results. I always took mine orally—why go to the extra hassle, I figured.

You will notice that for the days of your cycle before you ovulate, your BBT will stay pretty consistent (within a range which is normal for you). On the day you ovulate, you may notice a slight drop in your BBT, and then there will be a sharp incline the day after you ovulate. If the egg isn’t fertilized during this cycle, your BBT will fall again just before you get your period, which begins your next cycle. This is what a typical cycle looks like for me (my temperatures don’t usually have a very wide range like a lot of women, though my chart still follows the typical pattern):

Because the increase in the BBT doesn’t happen until after you ovulate, it is best used in combination with checking cervical mucus to predict your fertile period. Sperm usually live for only 3 days, but can live for upwards of 5-7 days (if the conditions are favorable). An ovum usually will live for about 24 hours. You can use those numbers to determine that the longest possible fertile period is 8 days (7 days of sperm lifespan + 1 day of egg lifespan). If you’re using FA to avoid pregnancy, you’ll need to abstain from intercourse or use a barrier method for 3-5 days before you ovulate (depending on how risky you want to be), and also 3 days after you ovulate (for a total of 6-8 days of preventing pregnancy during each cycle). During the rest of your cycle, there’s no need to use any contraceptive methods, because you are no longer in your fertile period, and thus, the possibility of pregnancy is eliminated.

If the egg is fertilized after ovulation, your BBT will stay high as it was just after you ovulated. If your chart looks like that and you’ve missed your period, it’s likely that you’re pregnant. Here is my chart from the month I got pregnant with Daniel:

How to Monitor Cervical Mucus

During the fertile period of the reproductive cycle, the mucus the cervix produces changes from clear and thin or creamy to thick and sticky (resembling egg whites). The term “egg white cervical mucus” (EWCM) is used to describe this thick, stretchy mucus that accompanies ovulation. Just before ovulation, the amount of EWCM will be at its greatest (providing a favorable environment for sperm to live). If you put a bit of EWCM between your fingers, you will be able to stretch it. (This all may sound a little gross, but once you become more familiar with your body’s cycle, it won’t seem unusual to be checking cervical mucus.)

Cervical Mucus can be monitored one of two ways: by inserting the fingers into the vagina to retrieve some mucus, or by simply observing the mucus that is wiped away when using the toilet. Either way, noticing the changes in the CM can help you to know when your fertile time is getting near.

Here’s a helpful visual representation of the changes in CM throughout the cycle (Credit: Planned Parenthood):

Another thing women can monitor while checking cervical mucus is the position of her cervix. Just before ovulation, the cervix generally is in a lower position in the vagina than during the parts of the cycle where a woman is not fertile. This is something you’ll have to get to know over time: If you’ve never felt your cervix before, you might not know what its current position is relative to other points in your cycle.

I have used the FA method for several years, both to avoid and achieve pregnancy. My partner and I effectively used this method before I became pregnant with our son, and when we were ready to become parents, I was already familiar with my cycle, and we knew when the best time was to try to get pregnant. We were lucky enough to get pregnant during the first cycle we were not preventing pregnancy. In the interim between giving birth to Daniel and getting my cycle back,we consistently used barrier methods, since we weren’t comfortable enough with the efficacy of lactational amenorrhea at preventing pregnancy. (I believe it was a smart decision for us, since my fertility returned at seven months postpartum, despite the fact that I had been breastfeeding on demand and co-sleeping.) Now we are using the FA method again (to prevent pregnancy) and have been ever since my cycle returned.

Overall, I really like the Fertility Awareness method for family planning. FA is natural (no artificial hormones involved), economical, and highly effective. I’ve enjoyed being able to get to know my body better through practicing this method of pregnancy prevention.