Not much to say about this really – just some of my little Aviya’s many beautiful faces. (It’s all in a mama’s eye!)

Sometimes I have this overwhelming urge to post a blog post with just a picture in it. If I gave in to those urges, you’d have had this picture as a whole post. I resisted… you know… for the sake of your RSS reader. But I think it was totally worthy of a post all on its own. 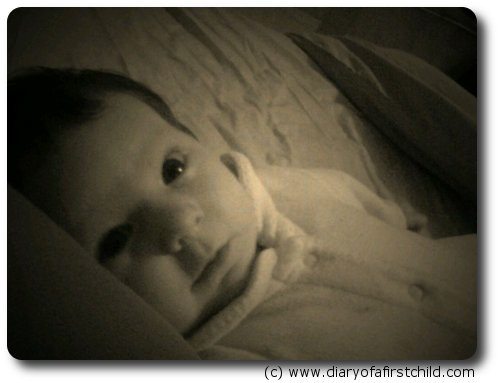 My company, Little Bliss, is really still fledgeling, what with having a baby and all, so I’ve been doing free demonstrations in the area to get the word out. I love baby massage. It’s so bonding and calming and soothing. And I love that I have a live  model. She was just awesome. She let me massage her legs, feet and arms for almost an hour. Awesome. 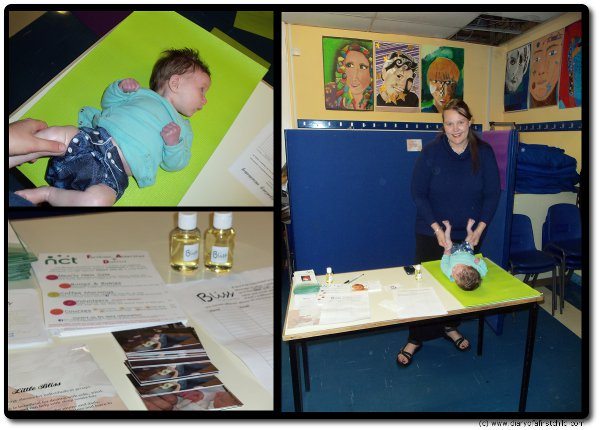 A total duvet day. We didn’t do much of anything today. At least, I didn’t! Ameli danced with daddy, did some stamping, cuddled Aviya, and built puzzles.

Ameli has lots of little playmates, but I think if I had to ask who her best friend is, she’s probably say “Arfur”. These two are thick as thieves, and if one jumps, the other jumps. And if one falls down, the other falls down. And if one climbs a lamp post, wall, climb frame, the other does. I have a picture of myself around her age with a friend I know only as “Heath” by the caption. We must have been like this. She bosses “Arfur” around something fierce though. We’ll have to work on that. 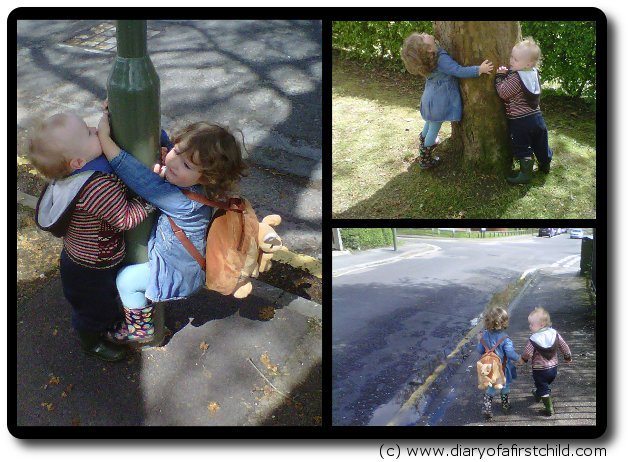 I don’t think I’ve ever been as grateful for sling wearing as I was at this sling meet. Our park was totally ruined by a combination of a circus and a lot of rain. The circus left so much mud, when we were trying to walk back to the car Ameli and her friend P were totally covered in mud. Ameli made the journey home in her nappy, she was that mud covered. In fact, in the last picture* there she was so stuck in the mud. The ranger, who fortunately for my new shoes was walking by had to go in and get the girls out. (Emily, P’s mother, had tried, but she got stuck too!) It was hysterical, but only in retrospect.

Ameli is in such a ‘monkey see, monkey do’ stage – she copies what everyone else does – like in the picture of her following P, or hanging off the climb thing like Arthur! Aviya, meanwhile… slept. 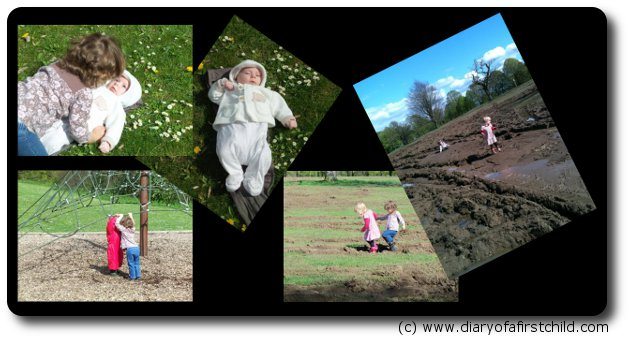 After yesterday’s muddy business, Ameli was rather snively nosed, so we had a late start to the morning. Sometimes in the morning I’ll let Ameli watch a program or two on TV while I wait for the coffee to take effect. This morning I had propped Aviya up and walked in to find Ameli snuggled up next to her baby sister explaining the characters of Chuggington to her. Rather sweet, really. 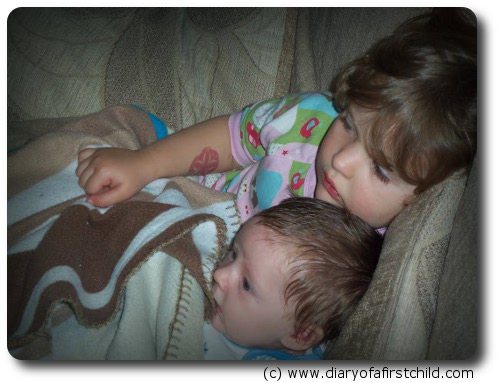