My girls and I have been working our way down the list of #50things from the National Trust campaign since it started, really, but looking back through the blog, I realise  now I’ve barely even mentioned it! We racked up quite a few ticks on our online box over the summer, so when we were invited to Yeo Valley to enjoy the fruits of their partnership with the National Trust, we jumped at the opportunity.

For a start it meant a three hour trip to Somerset, which first thing in the morning with no time for breakfast was not my smartest move, but never mind – as we descended into Yeo Valley terrain in Blagdon, North Somerset, it became instantly worth the journey. It was not dissimilar to driving down the mountains into the north of Italy. Just catch-your-breath-beautiful. But the roads were made for single track ponies, not cars, so I didn’t dare stop to take a picture. 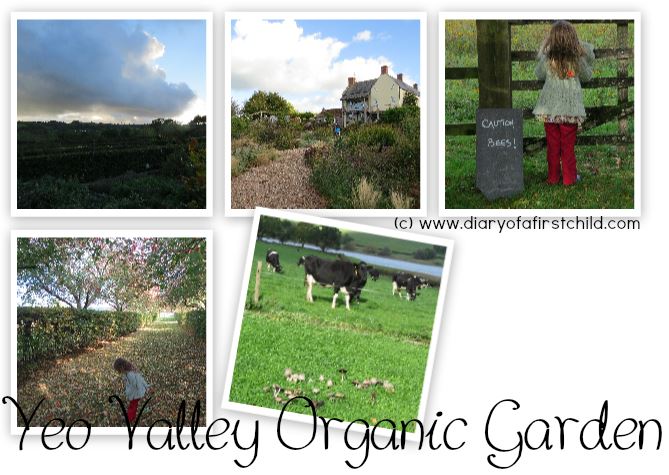 Upon arrival at Yeo Valley’s Holt Family Farm, we discovered the Organic Garden – again, just stunning. A beautiful landscaped maze of fountains, shrubs and a large vegetable garden, flanked by a field that apparently turns blue with bluebells in the spring and a crabapple grove groaning under beautiful, plump fruit. The family who own the business also live on the property, and their house is not far from what I dream about, with floor to ceiling windows that must offer an incredible view over the country side, and the fields dotted with cows – cows who all have names, and are milked twice a day before being let out to nibble on the grass at their leisure. Honestly, I could almost breathe in the wholesomeness of it all, and will definitely be returning for a visit when they open again in the Spring. (When they are open on Thursdays and Fridays to the public. Check the website before you go.)

We started the day with coffee, smoothies and flapjacks , before setting off on the National Trust #50 things part of the day.

Around the property they had set up a variety of activities – we started with a pumpkin hunt in long grass – the pumpkins were later decorated and filled with soil and cress seeds, so that they ticked the ‘plant,grow,eat’ part of the challenge. 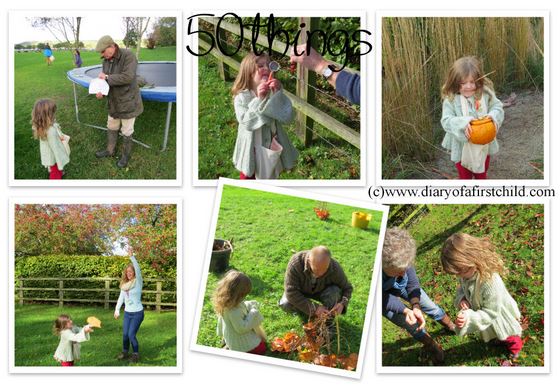 Next the girls built mini-dens for bug houses, before scampering over to the ‘catch a falling leaf’ activity before running around for a while, collecting nature items for crafts, and bug hunting and ending our morning’s fun and games with a (relatively flawed) attempt to blow a grass trumpet.

A beautiful lunch in the eclectically decorated Organic Garden cafe later, we sat back lazily watching the children play on the balcony. The autumn sun shining through the glass fronted building was enough to send me into a deep sleep, but fortunately, the team organising the event had loads planned for the afternoon.

We moved into the workshop where the children decorated pumpkins and made their pumpkin cress heads, before sticking and gluing and having fun getting crafty with nature. Aviya had a ball with the buttons, totally disinterested in what we were supposed to be doing, but she had fun in her one year old way. 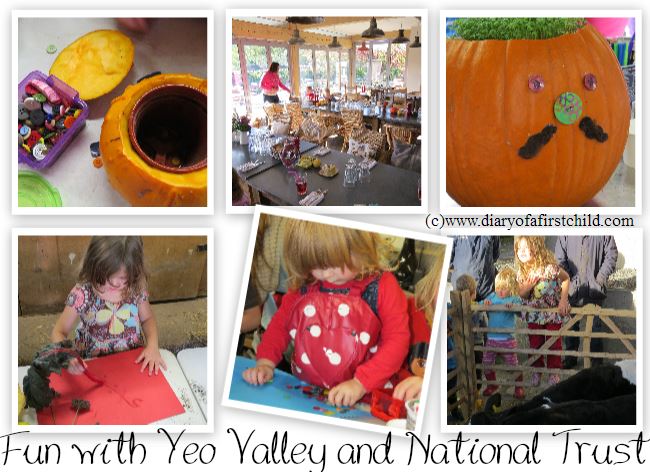 As if the day hadn’t been filled with enough excitement and exuberance, two calves made an appearance in the courtyard, and my girls were beside themselves! You’d think they were city dwellers or something the way they laughed and (Aviya) danced with glee!

As every good day should, our afternoon ended with coffee and cakes while we watched the sun drop over the hills around the Yeo Valley Farm.  We were sent on our way laden with yoghurt and cream tea vouchers for National Trust properties, pumpkins, crafts and fabulous memories from a magical day out in an incredible venue.

To find out more about our day out and hear what others thought, visit:

The Tiger Who Came To Tea Live In London
Mamatography 2014 – Week 3:A Funeral, A View
Whipsnade Zoo, Luton, Bedfordshire
Greenwich Planetarium For Under 5’s {Mamaventurers}