Halloween may have come and gone, but in our house, every day is just another opportunity for fancy dress. One of my neighbours recently exasperatedly commented that she’d never seen my children not dressed as fairies or other fictional characters! Since we recently watched Dreamworks’ Trolls we were all too happy to try out (or is that try on?) some Trolls fancy dress.

Trolls is a very light-hearted musical movie. It’s set in a plastic fantastic, super colourful world,  with ultra happy characters – all but one – who go through a series of stresses, most of which is the immanence of becoming supper to the Bergens, a larger, uglier race. The trolls escape, forge a new life, and soon forget the dangers of the Bergens in the happiness of their new home. Of course, this leaves the Bergens sad and miserable (they believe you can only be happy by eating a Troll), and eternally in search of the Trolls. During one loud and carefree party, the fireworks attract the Bergens, and Troll-world is thrown into disaster again. Poppy, the happiest troll ever born, and Branch, her extreme opposite, set off to rescue their friends, and so starts a journey in which these unlikely allies begin to understand each other and find the love they’ve been searching for right under their noses. The Bergen king finds himself in his own Cinderella story with a scullery maid and the Trolls help him realise his love for her, and in the end the good guys win, the bad guys are banished, traitors are found out, the humble inherit a kingdom and everyone goes home happy, and singing one of the multitude of pop songs incorporated into this Dreamworks musical.

Or you can skip reading all the above and get to the bottom line: the kids loved it. It’s a perfect mix of saccharine sweetness and enough moral compass to make it bearable to an old cynic like me. 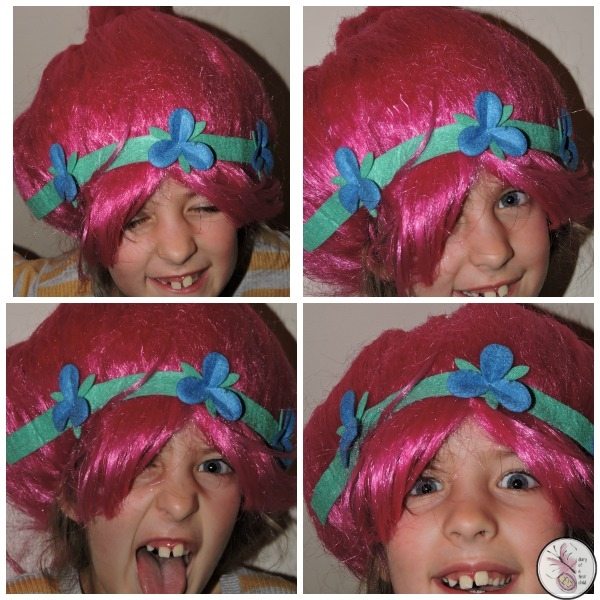 The Trolls Poppy Wig is a shock of bright pink hair in the cone shape that Poppy sports when introduced to us in the movie. It comes with an elastic so could be loosened, though I think it looks best as is. Poppy’s wig has a little fringe, and comes with a very fine netting which can be used to keep your own hair at bay – my kids managed to lose that within about 7 minutes of opening the box.

The bright pink wig is adorned with Poppy’s green headband, with blue flowers dotted around. I was a bit disappointed that this didn’t go all the way around, since humans don’t have big Troll ears for it to act as an Alice band, but it doesn’t seem to go all the way around in the movie either, so that’s just me. 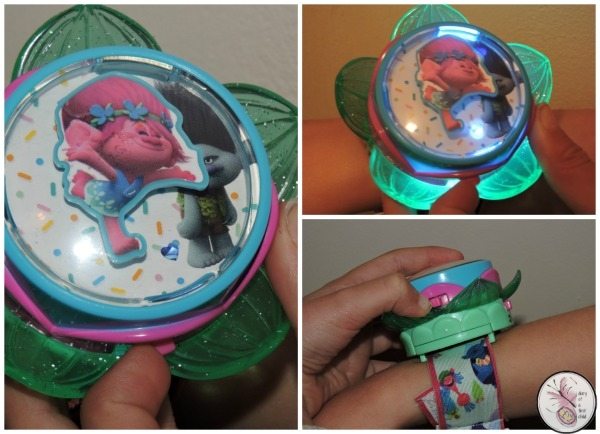 The Friendship Watch is rather cute. It comes on a stretchy material, size adjustable band with pictures of the Trolls on it, attached by a cloud. In the movie the Friendship Watch lights up hourly to announce hug time, and switched to the on position (it can be switched off when not in use) a little button on the side makes it light up with sparkly heart lights as it proclaims hug time.

The Friendship Watch, Poppy’s wig and any of these Trolls toys, combined with the DVD would make a lovely gift set! Head over to Dreamworks for free downloadable printables to complete the set.

We were sent these items for review. Opinions are our own.