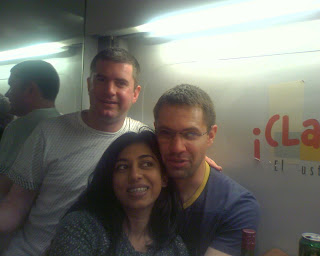 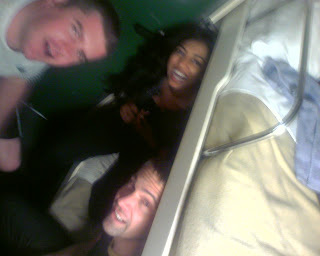 Today started rather slowly: a leisurely wake up as the building site next to our hostel came to life, a quick stint on the internet to add the London photos and some breakfast before we took the metro to Notre Dame.

This beautiful church on the bank of the Seine provides some amazing opportunities for photographs (to follow) and was once during one of the wars declared too beautiful to blow up. It’s gothic arches and gargoyles stand out sharply against a bright blue sky and summer remains visible in the roses that adorn the grounds.

We continued on to the Arc de Triomph where Edu and Simryn climbed to the top with views over the Champs Elysees and all twelve roads that lead in to the circle around the arch. Apparently this is the only circle in Europe where no insurance will cover you for driving! Martin and I sat by the side of the road for a while watching, and we now understand why! No traffic lights (robots), no lanes and 12 streams of traffic! Sheer madness!

In the afternoon, we took a stroll to Sacre Coer, a fantastic white church building on the higest point in Paris wth more spectacular views of the city. On the way up, we stopped by an artist market where probably over a hundred artists were congregated each selling and even painting on the spot their own style of portrait or landscape. It would not be hard to blow the entire holiday budget on wares from that market!

Sacre Coer itself was a different type of stunning. A functioning church, respect is commanded from those within. Nuns sit at prayer while tourists walk round and although it has all the trappings of a tourists attraction, the feeling of awe and majesty the architecture and wall decorations inspire, remains real. Photos and videos are not allowed – a rule which I strictly enforced.

We spent the rest of the afternoon walking around the less touristy parts of Paris, sipping coffees in cafes, eating crepes filled with chocolate sauce and walking past interesting sites such as Moulin Rouge where dinner and a show costs between E175 and E200+.

We ended today by boarding an overnight train with four chairs that convert in to bunk beds. The train is so much quieter than I would have thought possible, and the thin fold down matresses more comfy than last night’s bed!

Sitting on a train between Paris and Barcelona drinking a most delicious chocolaty South African Diemersfontein Pinotage we bought in London, we clink our plastic travel cups to another successful and unforgetable day.