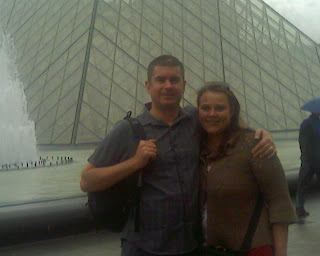 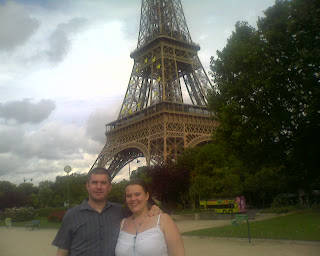 Today started very early, although not so bright. After not much sleep, we left for Kings Cross where we were blessed with very little queuing and after a quick bite to eat boarded the Eurostar.

The new Eurostar which leaves from St.Pancras instead of Waterloo takes only 2h26 mins to reach Paris. Time enough for a decent snooze!

Arriving in Paris at 11, we made our way briefly to the hostel before heading to the Musee du Louvre, or the Louvre. Home to the Mona Lisa, Venus de Milo, Di Vinci ceilings and literally thousands of other artifacts, the Louvre deserves a full day, if not two and if possible, take your own golf cart! We spent two hours looking for the highlights before exhausted and dehidrated, we met back in the lobby.

A walk and a train ride later, we were at the foot of the Eiffel tower. Intended as a six month fair ground centerpiece, the Eiffel Tower has been around for over a hundred years, and still attracts millions of visitors every year. Fortunately for us, not too many of them were there today, and we progressed quickly through the line. Edu surveyed the grounds around the base of the tower, Martin climbed the stairs to the 2nd level then took the lift to the top (as is mandatory), but Simryn and I took the lift all the way, as 500 odd steps would easily get the best of us.

Now off for a quick dinner in the Latin Quarter, then an early night as tomorrow promises to be as busy and eventful a day.

It really doesn’t feel like we only left London this morning!

Day 24 – Spain to Portugal
Day 5 – Barcelona
Toiletries packed and ready to go!
Ripley’s Believe It Or Not! London – A Great Day Out In London