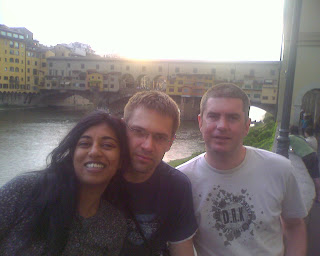 This was a really rough day.

Starting at 04.30 we left promptly on time for the metro, caught the shuttle bus to the airport had a relatively simple check in, and landed in Rome 20 mins ahead of schedule. We caught the airport shuttle to Rome central train station, but on route te airconditioning broke and tere were no windows to open. The bus became hothouse like, and the journey hellish. Had it been any longer, we would have had more than being soaked through, dehydrated and the associated nausea, dizzyness and headaches to deal with!

From Rome we took a train to Florence, which was fortunately airconditioned and we slowly began t cool down, but it had really taken is toll!

Upon a 45 min delayed arrival in Florence we made a beeline for our hotel and showers, only to find that there are two similarly named hotels in Florence and we were at the wrong one!

Saddling up our backpacks and suitcases again, we finally found our hotel, and I’m pleased to say it was worth the wait! Huge double beds, cool rooms and private bathrooms are a real treat in this part of the world (in our price ranges anyway).

The evening turned out a whole lot better than the day had started. We found a beautiful gellateria with about 40 flavours of ice cream, and beautiful ice cream bonbons. Two half scoops each later we made our way in to the town centre and towards the setting sun over the Ponte Vecchio and all the day’s troubles were quickly forgotten.

Apparently there are only three bridges in the world that have shops/houses on both sides, and this is one of them. (The others being in Venice and Bath, UK)

Posing on and around the Ponte Vecchio for many photos built up quite an appetite, so we went in different directions in search of our ideal dinner. Martin and I had a delicious calzone and pasta in one of Florence’s lovely squares before returning to the hotel for much deserved rest.