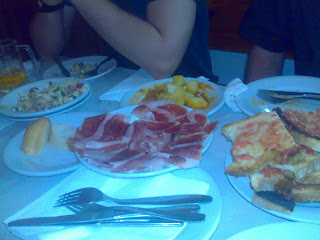 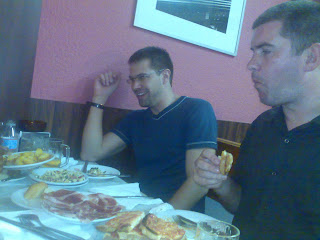 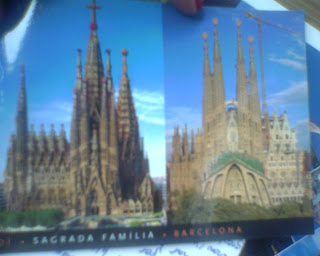 It surprises me that Barcelona isn’t mentioned in literature, song and folklore in the same way that Rome, Florence or Paris are. It is a beautiful city full of the magic, culture and character one has come to expect from European major cities.

We visited the home of a client of the architect Gaudi (1852 – 1926), famous for the architectural style he employed in some buildings in the city. Palau Guell, or Guell’s Palace was the only of his projects that Gaudi actually finished and it has been left to other artists to complete his commissions.

Repeating the bus tour today, we hopped on and off at the places that inspired us to brave the heat. As we have different interests we split up for the day, Edu and Simryn heading in one direction, us in another. Our first stop was the Arc del Triomf, which was smaller than its Parisian counterpart but headed a lovely pedestrian park area. We then ignored the bus route and walked the 16 blocks towards the next stop on the back streets discovering stunning buildings and cheaper foods!

Arriving at one of the Gaudi houses, we saw our travel companions pass us on a bus and didn’t see them again till the end of the day. Gaudi had some strange and experimental ideas about design and his houses are hard to sum up in words, but I recommend that you look him up!

Our next stop was the Sagrada Familia, an astounding Gothic/Fantasy cathedral which Gaudi began, but never completed. Currently the spires in the image on the right of the cathedral picture are the only ones that exist and by the completion of construction in 2025 (image on left) they will be the shorter spires. This thing is going to be massive! The beauty of it though is in the detail. Carved into the stone are scenes from the life of Jesus. The journey to Bethlehem, the wise men, the angels, the murder of the infants, teaching in the temple, and of course, his crucifixion are all among them.

Gaudi was massively inspired by nature and this is visible, specifically in the daisy – like flowers that make up the ceiling inside the cathedral.

I’m coming back in 2025 to see the completed structure!

Our final stop was the Palace with fantastic views over the city. Here we met up with Edu and Simryn again as they continued on to the castle while we returned to the hostel for much needed showers!

As the English football team was playing Andora less than an hour from Barcelona, we returned to find the streets teaming with England supporters and a similar response in Police, we decided that we would lay low and stay off the main tourist areas.

We returned to a corner cafe for tapas and were surprised to find ourselves the only non-Spaniards there. But then, with no menus, no sangria and few English words between the staff, and ordering by pointing at the items on display, it’s little wonder. We pointed at calamari, meatballs, mozzarella salad, pasta salad, fritata style omlet, and a large plate of cured ham and received two plates of bread and additional bruschettas with it. The guys had 6 beers and Simryn and I had 3 bottled waters between us and all told, the bill came to â‚¬41.40! If the people down the street in Bar London or the Queen Vic knew what we were paying for the quality and hospitality we were receiving, the place would have been swamped.

Upon arrival we were looked at slightly suspiciously, but we left amid cheerful and friendly goodbyes with gracias’s and buenos noches’s abounding.

With a 4.45 wake up call pending we returned to the hostel just after 11 and got ready for bed while those around us were preparing for the nights festivities and we bid a fond farewell to an awe inspiring Barcelona that deserves so much more of our time.