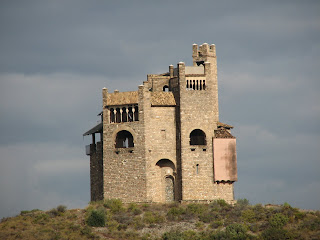 We woke early this morning, had breakfast and walked outside to see that the beautiful sunshine of yesterday was hidden behind rain clouds. We cancelled our plans for a stroll to Columbus’ castle as the rain began, quickly loaded up the car, went to the toilet and began the journey to our final destination, Sintra.

You might have wondered for a second why I felt it necessary to tell you that we went to the toilet, right? Well, about half an hour away from Benalmadena, having out driven the rain and for no particular reason I suddenly realised that I no longer had my camera with me. We searched the car before turning around and driving back in to the rain to hopefully find it again. By the time we got back, now just on an hour after we left, the roads were flooded under about 20 cm of water, water was gushing like fountains out of cracks in the road, storm drains spurted like cartoon fountains with their lids hovering above the road, and rain pounded the earth with the force of hailstones. Martin and I ran back up to the reception desk, and from the desk to the flat where I recovered my camera (gratefully) and then back to return the key. By the time we got back to the car we were both soaked to the point that we could wring out our clothes and probably fill a litre bottle! It is interesting how things sometimes only become valid in retrospect. This is the same rain we had two days ago, but as yesterday was so beautiful it didn’t seem to matter, but now we feel exceedingly blessed with the weather yesterday!

Fortunately, even though we stayed wet for some time, we did out drive the rain again, and enjoyed a beautifully scenic drive through some really remote parts of Spain for the next few hours. We drove past some stunning villages, as quintessentially Spain as you could imagine, before the invasion by the tourists and a landscape dotted with ancient castles and ruins.

We eventually arrived in Badajos where we left the car and took a coach across the border to Lisbon in Portugal. From there we took a (very very cheap!) train to Sintra but by the time it arrived it was dark. We checked in to our hotel, which we’ve all agreed was the most beautiful of the trip. It is an old villa in the hills of Sintra with 20-odd rooms, large landscaped gardens, a swimming pool and lovely breakfast room. The rooms themselves were spacious, gorgeously decorated and extremely luxurious, and room service is a definite added bonus!