A few weeks, or months ago, I wrote that Ameli was starting to teethe.Â  At the time I, stupidly, naively, thought people were right to groan when it came to teething. It really is a miserable time. Look at Ameli. She wasnâ€˜t eating well or sleeping well.Â  Phew. Was that a false reality. On a scale of 1 to 10 of horrible times, I thought it was a 7. In light of the last few days, I’m regrading then down to a three!

Just to put me on the back foot, over the last three days while Ameli has been striving for new depths of misery, I have been suffering from a particularly mean cold which has rendered me half a person, never mind a parent.Â  At the same time Ameli’s teething problems have been waking her up throughout the night, so much so that the poor thing has bags under her eyes now.

So with one to two hour sleep slots, waking at 3am and refusing to go back to sleep till around 5am, 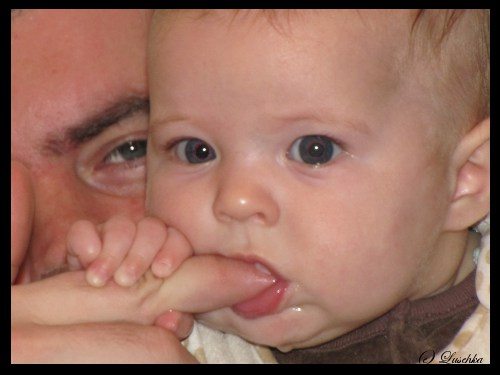 and spending the bulk of the day crying and gnawing at anything she can reach, these have been a rough few days.

We’ve tried the Chamomila pilules, which help for a while, and we’ve been having steady doses of Bach Rescue Remedy, her for the discomfort and me for patience and sanity.Â  A friend recommended an Amber necklace that worked for her daughter, so I shall acquire that and hope for the best.

These are really hard times. It is absolutely heart breaking to see her in discomfort and not be able to do much for her. She doesn’t have a fever, so there’s no real need to medicate, but it’s so hard to know that this is just something that she has to go through, even though she’s still so small.

I get so frustrated when I try to give her chamomila and she pulls away, or I give her a teething dummy (pacifier) and she spits it out, or the teething toy that she won’t take in to her mouth. She cries in loud, long sobs when I can’t just sit and hold her, and yet there’s nothing I can really do.

I guess this is a valuable lesson for me too. I need to know that she will go through things in this life that I can not take away from her, or carry for her. IÂ  have to learn to stand back, and take a deep breath and let her learn her own way.

Those lessons seem to start unfairly early though. For the baby, and for her mom.

Any advice on how to deal successfully, and naturally, with teething will be appreciated!

Herbs for use in Childbirth
Said the Bitch to the Cow
Must Haves And Baby Essentials
My Body, My Choice With A Backup – A Look At IUD’s