So there it is. Day 1 in cloth nappies is over, and I’m sorry to say, was an absolute success. Yes, I admit. There was a part of me, the lazy part of me, that really hoped it wouldn’t ‘work’ for us. But this was not the case.


My first observation about cloth nappies has to be how cute and comfy they look. These aren’t strictly speaking cloth, as they are actually bamboo, but they are just so cute and fluffy that you wont notice the difference. 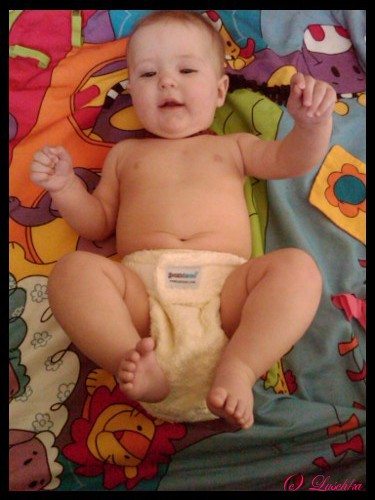 The second thing I noticed was that they do not smell. With disposable nappies, I would start smelling them within half an hour to an hour, and by two to three hours would have to change it even if it didn’t look particularly wet or wasn’t dirty, because the urine and chemical smell was becoming overwhelming.

After two hours in the Bambinex nappies, however, I was actually slightly concerned that she had not weed and opened the nappy up to check. It was soaked, although nothing had leaked through the wrap, and there was absolutely no scent.

At the end of the day I had all three bamboo nappies in the washing basket, and left them over night. I did suspect that by morning, the kitchen would have a bit of a wet nappy smell, due to the dry-pailing, but there was no smell at all.

In addition, although the nappy was quite wet, Ameli’s bum was a lot less red by the end of the day than it normally is. I attribute that to the lack of chemicals against her very delicate skin.

A big concern people tend to have about cloth nappies is that they make the bum seem much bigger, so the baby no longer fits into age-appropriate clothes. I think that’s less of a problem than it once was, as nappies have progressed so far that they are hardly bigger than disposables nowadays.

My favourite thing about these particular nappies is that they are made with the taller baby in mind, meaning they fit my little one perfectly, with a high cut leg not compromising anything in the waist.

I think we’ll stick to disposables for the night time for a while longer, but I am very excited about my new set of reusables, even though it’s going to take me a couple of month to build up to the recommended 15 â€“ 18 nappies.

Today was a resounding success, and I am now off to order another batch of Bambinex Bamboo Nappies.

Adventures in Cloth Nappies – Getting Started