Teething. In this house, it is as bad as you can imagine. My daughter, Ameli, started teething at about 8 weeks and the first tooth popped out at 19 weeks followed shortly by the second three days later. Since then we’ve had two months of welcome relief from the teething monster, but this week it has descended on us like a misty fog all over again.

Given that I am not a fan of Calpol, I thought I’d share with you some of the natural remedies that can be used successfully on a teething infant – the effectiveness of each one will vary depending on the stage of teething and the teeth involved. 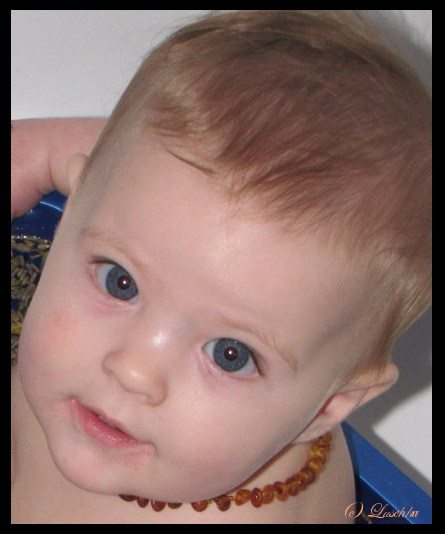 Now, before you write this off as hippie-voodoo, let me explain. Despite its appearance, amber is actually a resin, not a stone, and is therefore a plant residue which is warm to touch and light to wear. There are two theories as to why amber works:

One suggests that when amber is worn on the skin, the skin’s warmth releases miniscule amounts of healing oils from the amber which are then absorbed via the skin into the bloodstream.

A second theory is based on scientific findings (although I can’t find any of these!), which have shown amber is electromagnetically alive and therefore charged with a significant amount of organic energy. Its special attribute is the fact that it is electronegative. Wearing amber produces negative ionisation on the skin’s surface. This, in turn, has a positive influence on the human body. The negative ions assist in the in the prevention of illness. These health-promoting effects apply to babies, children and adults alike.

Just a word of caution – if you buy this for your baby make sure to buy one that is specifically made for babies so that they are stronger and safer. Raw amber is also said to be stronger than polished amber.

During the first round of teething a couple of months ago, Ameli had been crying for three days almost solidly. I put her amber necklace on and she stopped within half an hour. Coincidence? Possibly, but I’m not taking it off to find out. And there are plenty of mothers who say the same.

I swear by this stuff. There’s little I don’t use it for. It hasn’t been ‘tested’ on babies, but I assure you it works on them. Made only from natural flower essences, rescue remedy helps calm the baby if nothing else. I like putting a few drops on my finger and simply rubbing the sore part of Ameli’s gums with it. The rubbing and the essences soothe her and relieve her pain.

Calcium Phosphate occurs naturally in the body and is essential for the growth of bones and teeth. During teething it is helpful to give this to you baby as it aids the absorption of calcium, which eases growing and teething pains. As it is a naturally occurring substance, it is safe for infants and they can be given one tablet every hour or as needed. The important thing to remember with calcium phosphate – and most homeopathic medicines – is that caffeine will counter its effect, so if you’re breastfeeding, you’ll have to steer clear of caffeine as it will carry through to your baby. 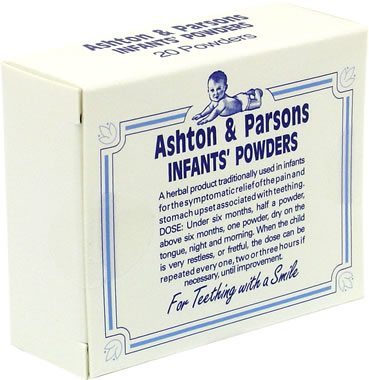 Recommended to me as ‘baby cocaine’, I had to take a close look into A&P before I was willing to use it, but since then it has proved a lifesaver time and time again. It is a white powder wrapped in individual paper wrappers which are incredibly hard to administer to a crying, writhing baby the first few times. Soon, however, they will recognise that strange little strip of paper hovering over their faces and open their mouths happily for you. It was a phenomenon I didn’t believe till I saw it myself.

So what is this little bit of kiddie heaven? It’s nothing more than German chamomile with a different name. It is known as Matricaria recutita and in children actually acts as an anaesthetic. It also settles the stomach, soothes in a similar way to Rescue Remedy and generally calms the child.

The book Your Healthy Child with Homeopathy by Tricia Allen, lists three remedies for three different types of teething babies:

Chamomilla 30 or 200 â€“ for a child displaying ‘classic’ signs of teething, such as irritability, red cheeks on the teething side, diarrhoea and pain worse between around 21:00 and midnight.

Belladonna 30 or 200 â€“ when both cheeks are red and burning hot, and a sudden fever appears. The pain is generally worse around 15:00 or around midnight

Pulsatilla 30 â€“ good for the clingy and miserable child who needs to be held and comforted all the time. Often going outside in the fresh air will sooth this child, and seem to suddenly have cold symptoms too.

Allen says this about specifically chamomilla:

â€œBe wary of commercial homeopathic preparations such as teething granules that parents often give up on, claiming they do not work. This is because they are in the 6th potency and that may be too low a potency to match the energy of the complaint. The higher potencies are very frequently requiredâ€ (pg.64)

Although I am not a doctor, I think these are all fantastic remedies to try before reaching for OTC medicines such as the additive-riddled Calpol or Calprofen. Of course, this means that we need to actually nurse our children through the pain, and be more attentive to their needs, which is always the ideal, but not always possible.

Sometimes, especially when sleep is disturbed, we do need to reach out to medicine to aid us. When all else has failed (normally mere hours before the tooth breaks through) there is always paracetamol in its pure form.

I hope you have found this useful and informative. If you have tried any other natural solutions to teething, please feel free to add them in the comment section below.