Like most simple two-word answers, though, it sounds a lot easier than it is. To me, being there has meant standing vigil through a long and difficult home birth; it’s meant giving up work and social opportunities to spend more time at home with the family; it’s meant putting on my sincerest fake smile when baby wakes up at 5am deciding it’s time for daddy to get up.

Be there. I wish I knew why the stereotype of raising kids being a woman’s work is still so popular. Fair enough â€“ maybe in decades gone by a man would go out to the office each morning while mum stayed at home to raise the kids. But those days are long gone. I’m a work-at-home dad that’s able to provide for his family while still â€œbeing thereâ€. Now in some ways I’ll admit I’m very lucky, but the question remains: why are so many men scared to get involved?

Are they afraid they’ll look less manly? Well, if looking manly is more important to you than forming a bond with your child, I’d suggest you take a long hard think about things. Because take it from me: nothing beats feeling like a good parent â€“ a good father â€“ when it comes to feeling like a good man. 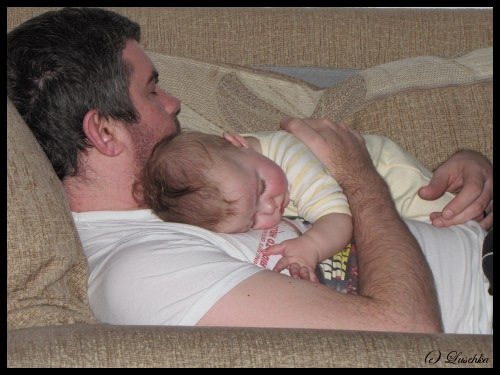 Being a part of those many â€œfirstsâ€ that seem to come along almost daily in the first six months of a child’s life has brought me more happiness than I thought possible, and all I had to do was… be there.

And make no mistake â€“ being there isn’t just a life-changing experience for you; it means the world to your child too, even if they can’t tell you how much just yet. As far as I’m concerned, I have a great dad â€“ both today and through my childhood. He wasn’t perfect, and didn’t do everything right (and of course neither will I), but what stands out in my mind is that rain or shine, whatever the situation, he was there for me.

For a child, that’s what matters. As fathers, we have the most incredible role to play in our child’s formative years: we get to be heroes. We used to live in Bath in the west of England, and every morning while walking to the office I’d pass a dad coming the other way with his three or four-year-old daughter sat proudly on his shoulders as he walked her to school.

We’d be on opposite sides of the road, but even from there you could see from the child’s face that those precious few minutes spent perched on daddy’s shoulders each morning were the absolute highlight of her day.

Now I’m sure that the father in question was just as flawed as the rest of us, and â€“ unfortunately for him â€“ one day his daughter will discover that. But for time being he gets to be superman, a hero who can do no wrong.

Now who wouldn’t want to be there for that?

Dads, I’ve Got Two Words For You
Homebirth – A man’s perspective
Flying Blind as a New Father
Breastfeeding in Public: Through Daddy’s Eyes