My angel, I’m so sorry. This letter is a week late, and you’re 19 months and 1 week old already. It’s been so busy here that I’ve just not had the time to write to you.

We’ve found somewhere to live, and although it’s been so lovely staying with Aunty Lindi and Uncle Ian, I’m looking forward to our new home in a whole new part of England. It’s not always nice starting â€˜over’ on some levels, but I am excited about exploring a new part of the world. I’m just looking forward to being â€˜settled’ for a little while again. 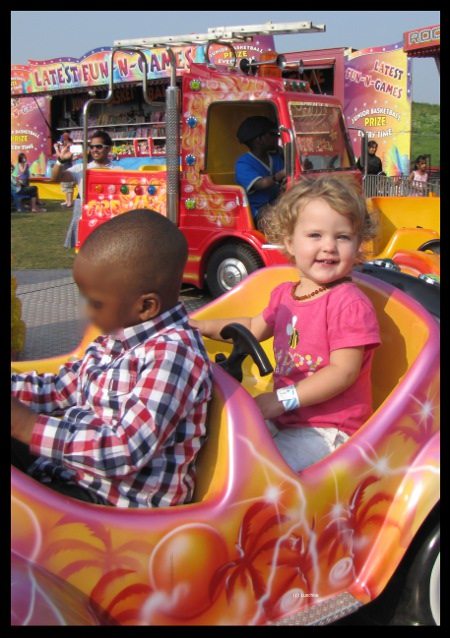 We’ve had an awesome month, in some respects. The worst of it was driving 60 miles after going to view a house with you screaming in the car seat the whole way. Â It was possibly the worst 90 minutes of my life. Or at least in the top 10. We stopped often, I nursed you, we got out and walked a bit, but in the end, we just had to get home and you refused to sleep, and kept climbing out the seat and honestly I was losing my mind.Â  But we made it home, by the grace of God, I think, because I was so frazzled by that point, it was unreal.

The best part of this month has been, well, all of you, really. Your vocabulary has come on so amazingly, I have tried to count your words, but it’s impossible. You can pretty much hold a conversation â€“ or at least one that daddy and I understand.

You’ve taken to Aunty Lindi in such a beautiful way, and love walking around the garden with her, and I think you freak Uncle Ian out a bit sometimes because you like following him around saying Â â€˜Hello’ or just staring at him.Â  Poor man.

Your Winnie the Pooh crush has evolved with the audiobooks we were given, and now whenever we drive I can usually distract you a little by putting on Pooh â€“ in fact, you point to the radio and say Pooh , and I have to oblige â€“ although I’m a little over â€˜A day for Eeyore, if I’m honest! Â But you’re at a point now where you actually recite parts of the audiobook â€“ just a few words at a time, like â€œOne, Two, Nowâ€ at which point they all throw stuff in the water near Eeyore in an attempt to create a wave that will carry him to shore.Â  Or when Rabbit wants Tigger to leave the party, you say â€œTigger, Leaveâ€. It’s very cute.

I’ve made a lot of our video clips from the last year into a series of 10 â€“ 15 minute home movies and you adore them.Â  You’ve finally this month learned to say your own name- sort of, but you think your name is Tyra- Â so now you point at my laptop and say â€œMore Tyraâ€ and I have to show you the videos. There’s one where you’re stroking a lamb and each time that come on screen, you turn to me and say â€œTickle Tickle Tickle Mummyâ€.

You met your godparents this month for the first time too, and we saw them twice while they were here visiting from Australia. We went to Peppa Pig World and you loved it. I won you a Peppa Pig doll which is about as tall as you are â€“ thanks Aunty Abbi for giving me the Â£2 for the game! â€“ so now you have a thing for Peppa Pig too. But more importantly, about six times a day you say either â€œMore Peppapigâ€ (you think it’s one word), or â€œMore Domâ€ or pointing at the laptop, and raising your shoulder in question, â€œAlith?â€. Those are Aunty Abbi and Uncle Des’ two children, and Alice, or Alith, is just a few days older than you.Â  I’ve seen that video so many times in the last week, it could recite it. Really. Frame by frame. 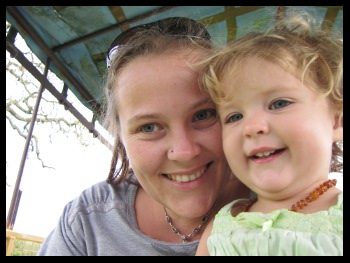 You’ve also been watchingÂ  the videos of our South African visit over and over, and started doing something that just breaks my heart: you sometimes cry out forÂ  the family there.Â  Like in the middle of a clip of Oupa playing football with you, you start crying for â€œOupa, Oupaâ€ or of you and Nanna in the pool and you go â€œNannaâ€ with a broken voice and taking my one hand in yours you start pulling at me while with the other, pointing out the window, outside, towards the car, as if to say â€œcan’t we just go visit, Mummy, please?â€

It’s horrible. It makes me feel sick and guilty and absolutely terrible and I just want to cry. I kind of thought you’d have forgotten them, to some extent, by now. Not that I want you to, but I don’t want it to hurt either, and I hate it. Especially since we can’t even Skype them right now. Fortunately Aunty Deshaine sends you videos on my phone every now and then (thank God for technology. Whatsapp is fantastic for videos!) and you watch them over and over, and talk to her on my phone.

We’ve started growing a garden, or at least the starts of one, and we’ll transplant it in the new house. I don’t really know what I’m doing, but you have inspired me to start. I want you to have fresh veggies and herbs, and I want you to know how to grow food and to be able to look after yourself, should you need to. I also want to teach you how to be good with money, and to look after your family and provide with self-reliance, and it really is a case of only being able to teach by example, so I’ve started the garden I’ve always wanted, and although I don’t have the knowledge, I’m hoping Oupa’s gardening skills have rubbed off on me somewhere in my life.

I’m not really sure what’s going on with you, perhaps you can feel more change is afoot, but you are very clingy and needy and I can barely leave the room at the moment, without a meltdown from you, but then, so much is changing in your life and you’re growing so amazingly, and starting to talk and so on, I guess it’s really just a lot of development for one little girl. At the same time, you’re so well behaved. I took you to a work thing today and you were so well behaved, people complimented you all the time.

I was so proud of you. I am so proud of you. Even when people at traffic lights look at me with suspicion because you’re screaming at the top of your lungs andÂ  writhing to get out of your car chair.

I am happy to be yours and that you, for now, are mine.

I love you Princess.