Or, apparently, so I found out today.

See, we went to a new playgroup. One we’d not been to before.Â  I gave our names at the register and the lady told us to have a seat, and that, although the group looked clique-y, they really weren’t and we’d soon all be chatting. There was another new mother who walked in just after we did, and mercifully she sat down next to us. I say mercifully, because if she didn’t, I’d not have said a word to anyone all morning, I’m sure.

Ameli immediately ran off and got involved with the sea of new toys. Wonderful. I sat chatting to the lovely, very young, homebirthing, newbie mama and we hit it off really well.Â  I kept a close eye on Ameli, as she’s going through a â€˜pushing’ phase, on the one hand, and on the other, if she has touched a toy in recent history, she thinks it’s hers. On a number of occasions I got up to encourage her to share, not to push and on one occasion to help her help up a little girl that she had pushed over. Why’m I telling you this? To illustrate that I was observing and very aware of what was going on (and don’t believe the four elderly ‘helpers’ are capable of providing 100% attention or care to around 20 toddlers.) 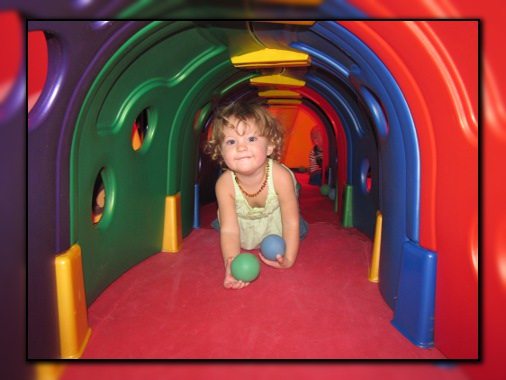 At one point, Ameli kept pushing a little girl away so that she couldn’t go to the slide. I intervened, gently, which made this little girl’s mother run up and without saying a word to Ameli or I, put her daughter on the slide. Fine. I took Ameli away anyway.

My new friend had two of her three children there and this one particular Little Boy In Blue starts pushes her 15 month old away to get a toy from him. Queue crying, but she just removes her son. Little Boy In Blue cried about every 15 minutes anyway.

But, back to Ameli, who is, running around on the â€˜stage’ where they’ve set up play tents and a play kitchen. Ameli is walking up and down loading smaller toys onto a toy box lifting thing, which she loads items onto and deposits them again elsewhere. Next moment, Little Boy In Blue comes up, pushes her and takes the handles. Ameli decides no way, and holding on with one hand, starts unclasping his hands from it. Little Boy In Blue stands there screeching and his mother, obviously used to it (he has been crying most of the morning) doesn’t notice at first.

I decide to watch, and observe, and see what happens. Surely, sometimes children must sort out their own issues without mothers jumping in all the time, right?Â  Well. Everyone sits watching them, with mothers from the â€˜not clique-y’ group throwing â€˜why’s she not doing anything‘ glances at me, one even pointing in my direction and I can see she’s saying â€˜that’s her’.

Which made my blood boil. My child was there first and these women were there judging me for not â€˜disciplining’ my child when obviously this boy was wanting the toy, when not one of them had seen that he was trying to take it â€“ as he had done with numerous other children over the morning.

Ameli kept looking at me to see if I was going to give her â€˜the eye’, but I didn’t. I just watched her to see she didn’t start pushing or hurting, and watching these mothers to see what they were going to do about it.

Eventually the boy let go, and Ameli, unfussed, continued moving things onto and off of the box lift toy. The mother eventually stood up and fetched her still screaming son, while her posse sat glaring daggers at me.

So, I’m sure there are at least six million ways I could have handled that better. Maybe I could have responded peacefully and gently to Little Boy In Blue? Perhaps I could have explained to Ameli that sometimes we just have to let go, even when it’s not fair? (I didn’t, because I’m ALWAYS erring on the side of other kids, because she’s so big for her age, but is that fair to her?) Perhaps I should have broached it with the mother?

What would you have done?

(I’ve written in the past about Gentle Discipline, especially in the Christian context because one thing I can’t bare is punishment for something I didn’t do. I guess that’s why I wasn’t prepared to make Ameli give him the toy in this case. How could I, if I would ‘correct’ her for taking one in a similar manner?)

I’m a Gaga Mama
The Mother and Baby Bond
Playgroup Monster Mama
Do Girls Really Need to be Daddy’s Princess?