Using pompoms and cups to learn to sort and name different colours.

I think Ameli’s a pretty smart girl, and she’s been quick off the mark with everything including crawling, walking and talking. She’s been counting for more than six months, and has been able to recognise and identify numbers since well before 20 months of age, which I think is pretty good. Colours, however, seem to have her flummoxed. She recognises them, and knows them, but can’t always identify them or remember them, and she does confuse them.

I decided it was time to do something about it, and make use of the plethora of resources I have saved up all over the place to try help us a little with learning colours. Problem is, I have no idea where I originally saw this particular idea, or whether it’s an amalgamation of many others? (It strikes me as a Montessori-style activity though?)  Anyway… here’s what we did for our first try:

I took five candle holders and laid them out in a line. I emptied out the bag of pompoms, popped one of each colour into each glass and then we started. It took a minute or so for Ameli to get the hang of the ‘game’, but she picked out the pompoms and before she put each colour into the matching glass, she had to tell me what it was. We ‘played’ that way for a few ’rounds’, to chants of purple, purple, purple, blue, blue, yellow, green.

We changed it up a bit, and I took all the balls and picked out colours for her, which she then named and popped in the right glasses.

I decided to leave her to have some free play time with the pompoms, and she decided to sort them in three cups by size, so that became the next game for a little while, followed shortly by pouring from one cup to the next and back again. 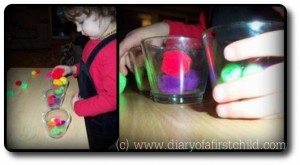 Later in the day, Ameli was playing with some balloons – two shades of purple, orange and red – and she was able to identify the colours, so I was really pleased!

We’ll do more colour exercises, over the next few days and expand our colours, but I’m really excited about the progress in just one day. 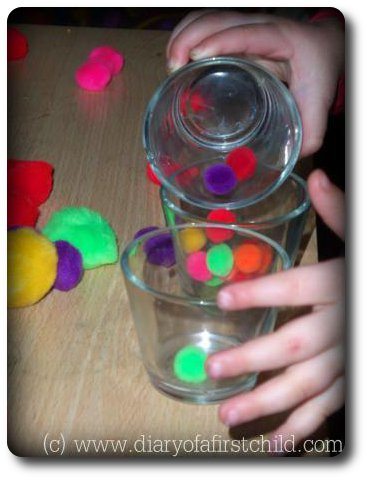