It’s Earth Day today, and while many people might not even realise it, millions of others around the world will be participating in Earth Day activities. In past years we’ve done things like black outs, where everyone is encouraged to turn off their lights for an hour in the evening, or meet at a local park to pick up litter.  While those are all fantastic ideas, and well worth doing, when I think of my children and how I can involve them in Earth Day, I realise that to them, a way of life will be so much more meaningful than simply doing special things on one day.

Equate Earth Day to Valentine’s Day. It’s all fine and well spoiling your partner on 14 February, but the rest of the year treating him like he doesn’t matter, you don’t care about him and he is irrelevant to your way of life. There’s little real or lasting about a relationship that only has effort put into it on one day a year.  Earth Day is the same. While 1,000,000 people doing something special on one day of the year is not to be sniffed at, 10,000 people doing something special every day is already almost four times as effective.

So how can I teach my children to treat every day as Earth Day?

1.       By living it in the visible things
We teach our children much more by our example than we do by our words. If your child sees you recycling, they are much more likely to recycle themselves, and it’s never too early to start. We have a refuse bin, a recycle bin and a food bin in our kitchen, and Ameli is perfectly capable of knowing what goes in where and has been since she was 20 months old. Yes, it takes a little guidance and explanation, but she knows the difference between refuse and recycling. 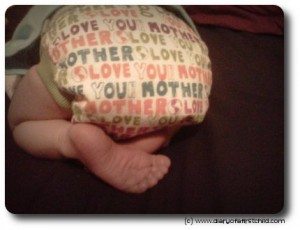 Recycling doesn’t only apply to rubbish – we recycle printer paper for art projects, toys go to other children or are sold on, most of our toys are wooden as they have longer life spans and less of an environmental impact than plastic. They’re also much hardier and won’t end in the landfill after a bit of bashing about.

Switching off lights, not leaving water running, using cloth nappies, or at least cloth wipes for wet nappies, dirty hands and messy face if you can’t do cloth nappies, reducing food waste; these are all changes we can visibly make to show our children we care about the planet.

Children may not be involved in the paying of the household bills, but that’s no reason for us not to adjust our lifestyles and habits in those areas anyway.  Most companies, for example, now offer paperless billing. While I’m a bit of a nerd for a neatly filled and ordered filing cabinet, the 10% discount we receive on our gas and electricity bill every month for not receiving a bit of paper makes a big difference over the year to my pocket, and makes a massive difference to the planet. (Just think if 1,000,000 people aren’t receiving them by mail, that’s 3,000,000 pieces of paper saved every month,  as well as 1,000,000 envelopes, stamps and who knows how many mail trucks not driving around couriering paper!)

You can also switch to a renewable energy company such as Good Energy which uses mainly wind, water and the sun to produce green energy.

3.       By getting involved in environmental matters

Earth Day usually presents a plethora of events to get involved with, but it’s not limited to these (remember point one, about Valentine’s Day?).  We’re participating in a beach clean-up later in May, for example. I remember doing events like this as a child, and I’m thrilled to be able to pass similar values on to my own girls – and again, it’s never too young to start! (You can join us if you like – there are beach clean-ups happening all along the coast.)

Showing our children that we’re prepared to give up of our time and energy for the Earth is probably the best way we can lead by example.

It’s easy to look after what you love. If a child has a passion for the planet, a love of the outdoors and an awareness, at least, of what there is that’s worth saving, it becomes personal to them too.

Getting a child out in the garden, or growing a windowsill garden, taking them camping, or to the park, foraging for food, eating organic food will help them appreciate nature. Having a pet is a great way of teaching them to care for something other than themselves – we aren’t allowed pets where we live, so we have a small fish tank and even that has been a great way of introducing responsibility to our two year old.

These are just a few of the ways that we try to impart ecological and environmental awareness to our still very young children, but then, if living as though the world matters is a way of life to them, it won’t be something they’ll have to learn later on, and that is well worth making the effort for now.

What Father’s Day Means To Me
What If This Were Your Baby?
Keep Britain Breastfeeding Scavenger Hunt
News Of The Week: Forced Adoption And Conditional Love