I’ve been in a quandary lately. While I would love to live in a world where my daughter could wear only organic clothing, eat only organic food, play in the garden all day with her wood only toys and support only local and parent-run small businesses, this is simply not our lives.

While I have high standards and many principles that I live by, I have begun to wonder if it’s worth the stress occasionally bending a self-imposed rule causes me.  Bear with me. Here’s an example.

When I was pregnant, I lived off a specific brand of Nestle fruit icelolly for the first few months as licking the ice lolly was the only hydration I got. (I had Hyperemesis Gravidarum). I drank Nestle’s Nesquick by the jug full every day of the last three months. I had no idea about Nestle’s dodgy dealings, had never heard of the boycott, and just liked to flavour the milk I was craving.

Not long after I began breastfeeding, I found out about the #NoNestle thing and since then have been a 98% strict boycotter (what about the 2%? Well, I don’t always find out what brand of coffee it is that I’m ordering, although I probably should.)

So, recently, my husband was bemoaning the lack of suitable replacement for chocolate milk and when we found some I couldn’t help but wonder whether this store name brand wasn’t from the exact same factory, from the exact same cocoa farm, somehow still making Nestle money.

I have no way of knowing, so drew a line under that, grateful that I can at least eat Cadbury’s chocolate. Until I got home and heard a talk show about child labour in the Cadbury’s cocoa plantations. I was furious, and even felt a little betrayed. How could Cadbury’s? I trusted them (over Nestle, at least)! To which my husband spoke a hard truth: You’ll find unethical behaviour in any big business. You’ll find a skeleton in every major corporation’s closet.

So, what do we do? Boycott everyone? That’s impractical. So, I’ve been thinking about how we live in a world where we can’t a) trust anyone to be entirely moral or ethical, or b) hide ourselves away hoping not to support anyone who is unethical, without going completely insane.

The conclusion I’ve come to, at least for our own lives, is to do what we can, and decide what’s most important to us. Like I do with charities. 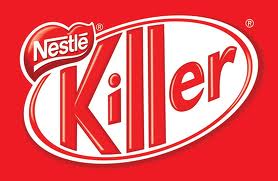 While I support a children’s charity every month, I wouldn’t support an animal charity. Is not that I don’t think animals deserve support. It’s not that I don’t think they are cruelly treated by their human neighbours. It’s not that I condone the mistreatment of animals. But I worry more about the children, and if I have more money to give, it’ll go to the children. (And I’m pretty certain that if someone is abusing their animals, someone needs to take a closer look at what’s happening to the children in that home too.)

It’s the same with having principles about something. If you jump up and down and campaign about everything, people begin to believe you just like fighting and think you’re better than everyone else and they don’t respond to your pleas or your words anymore. If you care a lot about one, two, or even 10 things, people accept that you feel strongly about them and will often even support you.

In the same way, I most certainly do not condone child labour, or child poverty, or corporate  greed, and perhaps I just have to learn to do without chocolate, but if my choice is between one or the other, I’d still take Cadbury’s over Nestle any day, since Cadbury’s unethical behaviour affect a definable number of people, however tragically and unfairly, whereas Nestle’s subterfuge affects untold millions (although, of course, the effect of, say, formula feeding, is less than that of forced labour).  (See how I go round myself in circles on this thing?)

So, the problem with principles is that you have to decide what’s important to you, and where you can draw a line, stand your ground, and live with the consequences of your decisions, but you have to realise that someone else, somewhere else might be fighting a similar battle against the brand you’ve decided you can live with.

And some days, some issues may appear bigger than others, and it swings and roundabouts. Which means as the ‘little people’ we can possibly never have outright victory, but at least we can put pressure on the other little people – like no longer frequenting the cafe near me that’s switched to Nestle and is now covered in Nescafe branding – and eventually on the ‘big people’.

The ‘big people’ – big businesses, corporations and so on  – make money. That’s what they want. So, if every time the Nestle/NoNestle debate rears its head more people find out about it, and if one person reaching for Nescafe now reaches past it that’s a knock to big business. A knock of a couple of pounds, perhaps, but it adds up. I used to call myself a coffee snob. I drank nothing but Nescafe. I’d rather go without than have anything else. So, now I don’t spend £8 a month on Nescafe anymore. That’s £96 per year. That’s let’s say £3000 in the remainder of my lifetime. Say 1000 people join the boycott, that’s £3,000,000. A million people? £1,000,000,000.  By changing your brand of coffee. That’s not including cocoa, chocolate milk, or Body Shop Products or Jenny Craig or any other of the long list of Nestle brands.

It makes a difference.

I’m not sure how to end this post. There’s no call to action, there’s no guilt trip, no plea. This is my personal decision for my home and my life. Nestle is the brand I make my stand on. It’s the one I draw my line under.  I cannot bring myself to fund the lifestyle of someone who sits in a cozy room in an expensive business suit and says, “Yes. Fine. Let’s do it.” When the “let’s do it” means scheming, conniving, and conning mothers, and knowingly, costing little, innocent lives.

Guidelines for Safe Formula Feeding
Carnival of Nursing in Public – A Guest Post
From Drinking Bottles To Nursing Slings: Making Up The Perfect Nursing Baskets
Breastfeeding During Pregnancy