Every woman’s experience of both breastfeeding and pregnancy differs. As a result, it’s impossible to predict what it would be like for you. There is a very common thread, however, in the experiences of other mothers ‘pain’. *see the end of this post for links to some other experiences.

While I felt a certain amount of sensitivity around my nipples in the first trimester, it was never so bad that I even considered giving up (although due to Hyperemesis Gravidarum, I considered forced weaning). However, as we’ve approached and passed 16 weeks of pregnancy, the pain associated with latching on and off has become relatively excruciating, and I’ve found myself grimacing like never before during nursing.

Another problem I experienced in the first trimester was that nausea increased during breastfeeding, and I’d sometimes have to unlatch my daughter to vomit. 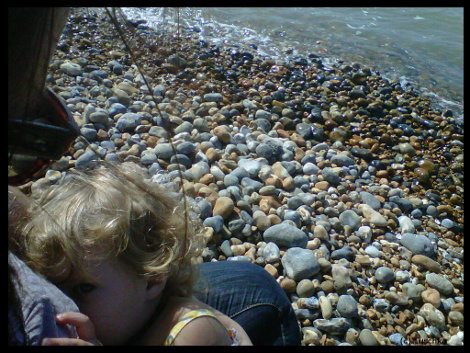 Additionally, while my daughter eats really well during the day and only has breastmilk to help her settle down for naps, she is still a regular night time feeder. While this has never been a problem, the pain now actually wakes me up at night.

I have been looking for ways of coping with breastfeeding pain during pregnancy, but so far haven’t come up with much by way of solution.  The problem is that just as the pain differs from person to person, so does the solution.

When to wean is really up to each mother to decide what she wants to do, what she can cope with and for how long and what her reasons are.

Why not just wean my 23-month old? Because she’s still too attached to her nursing. It gives her comfort and security. I am afraid to simply cut that off and in six months give it to another baby. I do not believe that she will have ‘forgotten’, but feel that it will increase the chances of rivalry between her and her sibling, and really, weaning is something I would like to come from her, when she is ready.

On a slightly different note, what has surprised me more than anything during this time has been the response to finding out that I am still nursing during pregnancy. To put it into perspective, I’ve never really had any negativity towards breastfeeding an almost two year old, even though her height makes her look older.

I have, however, been asked repeatedly, and told with concern that you cannot breastfeed when you’re pregnant. Especially older women have made comments like:

(Erm…it doesn’t. It does change, from the second trimester onwards, and reverts back to colostrum eventually. While your nursling might no longer like the taste and decide to self-wean, it is certainly not poisonous and is in fact incredibly healthy, although it may also have a laxative effect on your nursling.)

(Actually, your body is going to provide for both unborn baby and nursling. It will take everything it needs from you, so it’s important to have a healthy, balanced and nutritious diet.)

(You can hear when a baby is simply suckling, and when they are taking in liquid. Big gulps and a deflating boob are evidence of milk being consumed.)

(To date, no research suggests or proves this.)

While the sheer misinformation saddens me, I am also pleased that I have been able to use each of those comments as an opportunity to gently, calmly, educate and correct the line of thinking. In each case, it was simply a matter of what they themselves had been told, and seeing me actually doing it has been evidence enough in each case.

Breastfeeding during pregnancy isn’t impossible, but it is an active choice and a conscious decision. At least it is for me.

* CodeName Mama – Common Concerns About Safety (Of nursing during pregnancy)

* Momma Jorje – Nursing Through Pregnancy ( a look at the late night, tired, more miserable side of it all)Â

What Is Breastfeeding Let-Down And How Does It Work?
Natural Childbirth: Changes In Sex Life
Tips On Expressing Breast Milk
From Drinking Bottles To Nursing Slings: Making Up The Perfect Nursing Baskets