It’s Father’s Day today, and also the start of National Breastfeeding Week, so I thought I’d combine the two and got Ameli’s Daddy â€“ my husband Martin â€“ to chip in with his thoughts on fatherhood, bonding and breastfeeding.

It’s about as helpless as I’ve ever felt as a parent.

The situation goes something like this: it’s 10pm and you’re sitting in the lounge watching TV. Nine-month-old baby has been waking up crying a lot over the last few nights thanks to a particularly bad bout of teething. Being a breastfed baby, however, the soothing reassurance of mum’s breast is all it takes to get her back to sleep within a few moments. 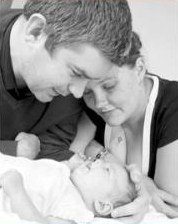 Problem is, mum’s in the shower and baby has started stirring. You go into her room and try soothing and shushing her back to sleep. But in her semi-awake state the only thing baby is interested in is mummy’s breast, and mummy’s breast â€“ and the rest of mummy â€“ is in the shower oblivious to baby’s distress.

And there’s absolutely nothing you can do. By the time mummy gets there a few minutes later, baby is wailing uncontrollably and you’ve lost 10 years off your life.

I’m sure plenty of dads have been through some variation of that scenario, and it sums up nicely the (perceived) difficulties dads face in trying to form a bond with young breastfed babies.

The simple truth is that you’re just not needed (by the baby), and too many fathers feel distanced and irrelevant as a result â€“ to the extent that some mothers will choose bottle-feeding over breastfeeding just because it gives fathers some way of being involved.

But it doesn’t have to be that way, and there are plenty of things you as the father of a breastfed baby can do to build a bond with your child.

First of all, you need to come to terms with the fact that initially, it genuinely is all about mum. It’s nothing personal at all, it’s simply that a newborn’s needs are very basic, and it looks to mummy to take care of them.

That changes quickly, though, and here are a few ideas for how a father can start building a bond with his breastfed child.

There are many ways of bonding with your child, none of which have to sacrifice the breastfeeding relationship. Now, at 20 months, one of my most precious experiences, is having my daughter fall asleep in my arms. Our bond is amazing, and has not suffered at all for our choice of feeding.

Homebirth – A man’s perspective
I Cannot Imagine Parenting Without…
What message does this send our children?
Do Girls Really Need to be Daddy’s Princess?