Author: Martin
So, breastfeeding. It occurs to me that a man writing about breastfeeding is probably either very brave or very stupid. Well, I don’t count myself to be unusually brave, so I’m hoping there’s an option C I’ve overlooked.

As a new father I’ve been asked several times â€“ invariably by women â€“ for my opinions on breastfeeding â€œfrom a man’s point of viewâ€, and in particular my thoughts on the sometimes delicate (and at all times controversial) subject of breastfeeding in public.

That fact in itself is worth taking a look at. Why are women so interested in what men think about breastfeeding? The answer is simple â€“ because a man’s viewpoint on breastfeeding is different to a woman’s. Anyone who pretends otherwise is kidding themselves. 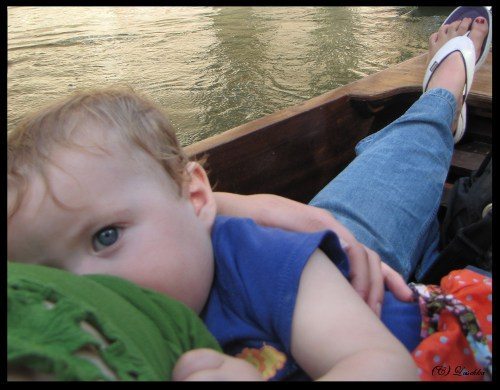 I mean, of course it’s different! From a biological point of view breastfeeding is a physical function of a woman’s body, one that meets one of the most basic and universal needs of all living creatures â€“ the need to nourish our young.

It involves a psychological and emotional bond too, building on that profound connection between mother and child that was literally all-encompassing while the child was in the womb.

Now, as a man I have absolutely no trouble understanding and accepting all that â€“ for the most part, it’s entirely obvious, after all â€“ but there is one unchangeable fact: I have never, and will never, actually experience it personally from the mother’s point of view.

But probably the most common reason women ask men for their views on breastfeeding is the fact that breastfeeding involves breasts â€“ which also happen to be perceived as a sexually attractive part of a woman’s body. Now just why that is makes for an interesting topic on its own â€“ especially since there’s no question that us men are entirely to blame. But right or wrong, it’s an unavoidable part of any discussion on breastfeeding in public.

For my own part, I’ve got very few issues with it and certainly have never objected to anyone doing it, but I am brave enough (or was it stupid?) to point out one or two practical points that really do need to be made.

You see, take a group of perfectly average heterosexual men and say the word â€œbreastâ€ to each one in turn, and I guarantee you every single one of them will think about sex before they think about breastfeeding.

Now while I admit this does little else but prove the immaturity of most men, it’s nonetheless just the way things are, and now that I’m a father it’s my own wife’s breasts that I’m painfully aware most men in the room are now trying desperately NOT to look at. And I don’t enjoy the feeling. Yes, that’s my problem and while I’m never going to make a scene about it, I can’t pretend it’s not real.

So I do have some sympathy for men who admit to finding it difficult to relax around a woman who is breastfeeding. It’s not a particularly big deal for me, but everyone is different. I can certainly relate more to that than to anyone who pulls out the old â€œproper behaviourâ€ argument, so long as he’s willing to take responsibility for his own hang-ups instead of expecting you to (for example, he’s just as capable of leaving the room as you are – more so, in fact, considering you have a child attached to your body).

It’s a pity, though, that the large number of men who have no issue with breastfeeding at all but are simply a little uncomfortable in the situation would rather not talk about it because of how sensitive so many mothers can be, due to other aspects of the breastfeeding debate.

It does seem to be a lost opportunity for men and women to understand each other a little better, and considering all the other challenges involved in bringing a new life into the world, that’s a shame. But that’s just me being honest. Perhaps that’s the option C I was looking for earlier on â€“ then again, quite often that’s little more than a combination of brave and stupid.

Homebirth – A man’s perspective
JORD And Thornton’s: A Perfect Father’s Day Pairing
Breastfeeding in Public: Through Daddy’s Eyes
Do Girls Really Need to be Daddy’s Princess?