A lot of life is about change, so it should come as no surprise really, when after a new baby, life changes. A lot is different now, to the last year, at least, of our lives. The final months of my pregnancy had rendered me relatively immobile. While we were ‘out and about’ a lot, being at home was a pretty sedentary thing. I’d sit on the sofa and work, work, work. By the time my family arrived here in February, I had blog posts scheduled into April, and all my work that could be scheduled was as far as I could go.  My husband played a much bigger role in parenting a toddler and running a home than I did.

With my family here, a lot was done for me, Ameli was kept busy and after Aviya’s birth, we had meals brought round by friends, so we were taken care of. My mother returned home when Aviya was almost four weeks old and we’ve taken the ensuing three weeks to find our feet, to readjust as a bigger family, and to try to find our way.

It’s not been as hard as I expected. We’ve all just sort of…. melded… into our new roles.

The greatest change has possibly been for me. Finding balance between being a work at home mother, a stay at home mother and simply me. For months my focus has been solely on work, fitting mothering in around my responsibilities. With family here I found it okay because Ameli was being looked after. On our own I’ve had to take a step back from it all. I’ve had to refocus on parenting.

And I’m loving it.

Yes, I worry about the hundreds of emails lying dormant in my inbox, but you know what, if I spend all day answering emails and empty my inbox, at the cost of especially my little girl, then I feel great – until tomorrow, when all those emails are answered and I again have a full inbox. I could fill every day with emails and leave myself and my babies unfulfilled.

But change or not, the life we had three months ago is no longer working for us. January’s reducing aside, there’s still too much clutter. The end of every day leaves our communal areas looking like a bomb hit it – by which time I’ve started working for the day, and don’t have time to clean and tidy – the girls have too many toys for the space we have available, bills are left unpaid, seeds unplanted, due dates come and go, submissions are left half written, with no time to finish them on time. Cooking is a schlep, leading to money spent on food we don’t need with money we don’t have.

So – we’ve started making changes. Small changes, but significant. I’ve gone through all the toys and separated them like with like. I’ve gone a step further and put all small items into individual bags – a whole puzzle in one bag, for example, so that when it comes to play time, we can take out one bag rather than tipping out a whole box with a mishmash of puzzles. We’ve put food toys together, musical toys together, art and craft bits together. We’re trying a bit of a Montessori thing with toys and so far, it’s made a huge difference. We put a mat out and most of what Ameli plays with can be played with on the mat. More importantly, it’s one thing at a time – puzzles, put away, crayons, put away, music toys, put away. 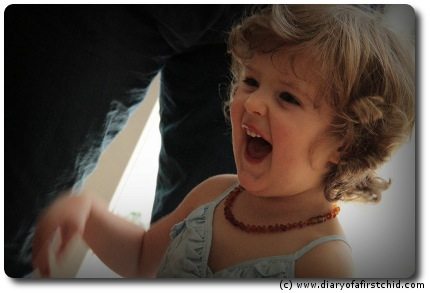 We’ve started employing a more ‘playful parenting’ approach. How quickly can we pick up all these toys? Or I’m going to chase you up the stairs, here I come!! It’s harder, sometimes – when I’m tired, stressed out, fed up with other things – but it’s easier. It makes parenting easier .

We’re trying to make nap time shorter and bed time earlier. This doesn’t always work, and we’re not strict on routines, but sometimes it helps.

I’m trying to be more organised around the house – cooking twice as much when I cook, so I can freeze another round for a night when cooking isn’t high on the agenda. Having crafty things ‘ready’ in an activity bag for when we need a quick way of refocusing attention, or calming down. My next step is to make up packets of bread ingredients that can go in the bread machine every morning for our days bread.

We’re in the process of de-wintering our conservatory so that we have a play room again. We don’t have the space or money for a sensory room, so we got a very cheap play tent off a second hand site and are slowly getting things together to make a sensory tent. I’m so excited about that and can’t wait to share it with you. I hate ‘time outs’. Ours just isn’t a child that responds well to it. She seems to experience it as a personal rejection, so rather than forcing tearfully into a time out, which even 60 seconds later leaves her tearful and clingy, we want to try the tent for a sensory calming down. We’ll see how it goes.

I don’t know if this is the normal ‘settling in’ stage that comes after a family expands, or whether the Slimpod I’ve been listening to for trying to kick my chocolate habit (which has some mention of being able to control other parts of you life once you’re able to control this one) is affecting this part of me too, but I feel peace, and a desire for peace. I feel the need to be more organised, so that I can be less of a headless chicken and survive in a more orderly fashion.

And show my girls the beautiful side of motherhood, and of womanhood.

Not a mother who can’t cope with her two children without a family around.

Not a woman who can’t cope with the demands of the housewife side of her role.

Not a woman who is subject to and victim of circumstance, but the strength of a woman who rises above adversary. Whose children are clean and well dressed regardless of financial difficulty, who works to support her family despite the demands of the same.

Woman is so powerful. The rawness of birth has proven that to me, twice over.

That is what I want to teach my girls. Not that they are equal to or better than the opposite sex. There’s no value in that as a lesson. There’s nothing to gain in that comparison.

And it starts with me, and a consistent rhythm of change.

My children will know motherhood and womanhood in the example I show them. Pray I lead them well.