As you can tell from the severe lack of posting around here, life is keeping me extremely busy. I’m so far behind on posting so many different things, and I’m not even sure what exactly it is that’s changed! For one thing, the girls just don’t afford me time in the day to work, since they’ve unsynchronised their naps. Then, when they’re finally in bed, I’m so tired I can barely keep my eyes open. It’s a nightmare, and I know it will change again, but for now, well… I’ll see you when I see you!

That said – we’ve had such lovely weather the last few days that we took lunch outside today, and it was so great I wanted to share it with you.

(We have this great picnic gas barbeque which means we can cook pretty much immediately. I’m a huge lover of bbq but we rarely have them because it just takes forever to get the fire ready, so since the gas bbq, it’s so much easier! This recipe can be done on either the bbq or in the oven.) 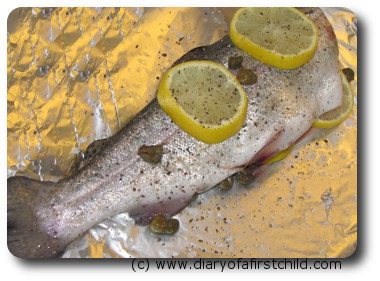 Serve with salad of your choice.  Ours was rocket and spinach leaves with mixed seeds and tomato, with a truffle oil and balsamic vinegar dressing
For the fish: 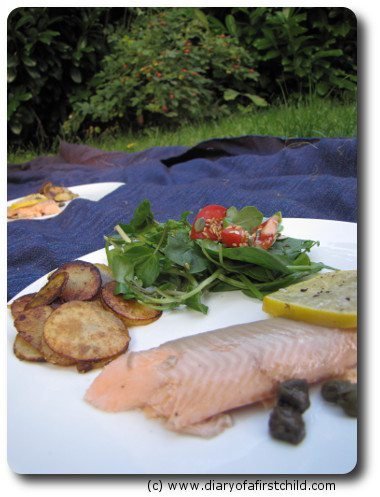