I’m so glad I decided to plant the sunflower seeds the same day as the tomato plants, because for days and days nothing happened. We opened the growing thingy each day to find nothing, except one random weed that popped it’s head out. I was beginning to think the Heinz Grow Your Own tomato plants were a fail. I did find another bag of seeds though, so thought I’d try again. 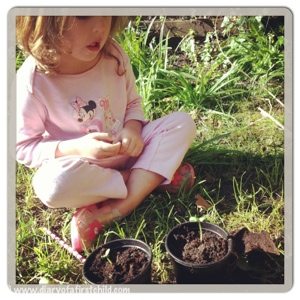 The sun flower seeds sprouted and one of the two of them shot right up. It’s pretty cool though. The other may or may not have had a fight with a pigeon. I’ve stuck it back in the ground, but I’m not sure it’s grown at all since then. At least it hasn’t died. That’s progress, right?

It’s been a bit of a rubbish week, weather wise, so I haven’t really been out in the garden much, and left my ‘failed’ tomatoes where they were, and I’m glad I did.  When I got back to them, there were four little plants smiling up at me. I’m not sure if Ameli was more excited, or me!

We’ve replanted the sunflower plants, and will be replanting the little tomatoes soon. In the meantime we’ve also planted some potatoes from the Grow Your Own potatoes scheme that was advertised earlier in the year – did you know there’s a potato council? It’s a little like the Ministry of Magic, eh? – but I took more than a month to open the box, by which time all the eyes had sprouted and now I’m not sure if they’re actually going to grow or not. We’ll see, I guess. I’m still really hopeful for something more than herbs from our garden this year!

Anyway, I have yet to plant the next bag of tomato seeds. They’re a different variety, so hopefully between the two we’ll have a good harvest, and once again I’m really hoping I didn’t leave it too late!