Last week Ameli was asking questions about words that sound the same – by which she meant rhyming words, rather than homonyms. With a degree in Languages and Literature, this stuff is right up my street, so I decided to break away from Summer Camp at Home for the week, and focus on rhyming words and sounds, and an introduction to poetry, using nursery rhymes she already knows and introducing a couple of new ones too. 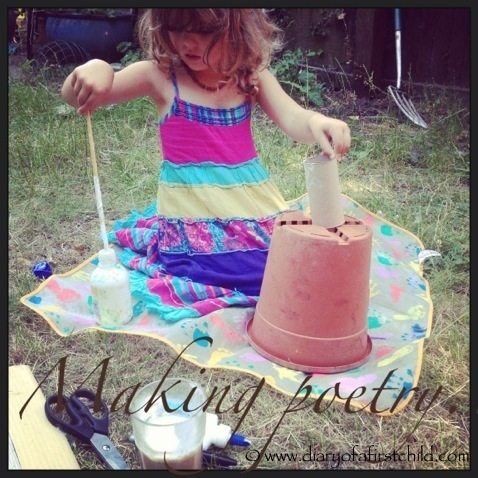 I found an awesome website (thank you Mud Hut Mama!) with learning plans, resources and everything you’ll ever need for teaching nursery rhymes. A lot of it was a bit old for Ameli, but most of it was great, and easily adaptable.

We started with an old favourite: Humpty Dumpty.

Humpty Dumpty sat on the wall,

Humpty Dumpty had a great fall

We read through the poem, looked at the words together, and spelled it out, and then, we acted it out. This was so much fun. She absolutely loved building the Lego wall, and knocking the egg off it. Watch this 30 second clip. It was great.

We used one of the resources for Hickery Dickery Dock. The printout is about forty pages, give or take a few, so I printed them six to a page, then cut those out. Each ‘page’ has a sentence on it, with a word left out. The child then finishes the sentence with a word that makes sense (all rhyming with dock and clock, so the -ock rhyme sound) and finds either the picture or the word that goes with it. We pared those up in matching pairs. 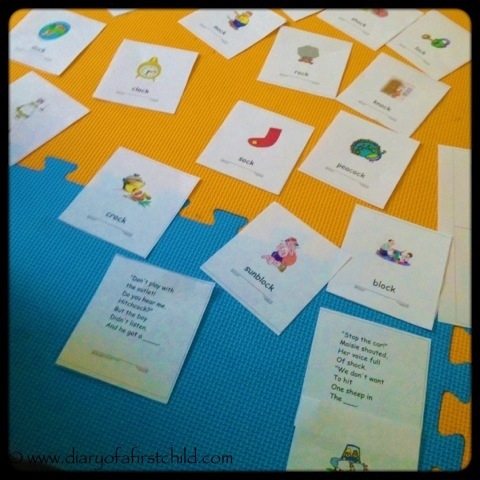 I had various samples printed, but she got a bit bored with that. The next ‘game’ I was going to do, however, was separating the -ock word cards from the -all word cards from Humpty Dumpty. Perhaps another time.

While I know she was just looking at the pictures in some of the words, there were plenty in which she was reading the letters. She can sing the alphabet song, and can identify most letters – not y, oddly – but was doing really well. 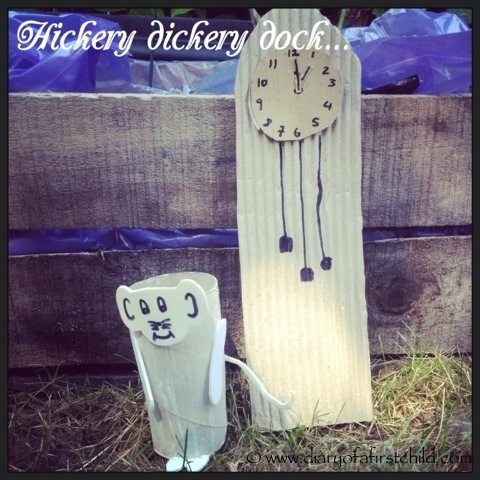 When we finished ‘school’, Ameli and I sat outside during Aviya’s nap and soaked up some sunshine while doing some arts and crafts. I cut out all the body parts for the mouse, and made the clock while she was painting the toilet roll. When it was all dry we stuck it together, and drew on the clock parts – and watched some Youtube videos about grandfather clocks, and how they work, since she was asking and I didn’t know how to answer!

While the paint and glue were drying, Ameli and I lazed on the grass making up rhymes. She didn’t always get it right, but she was trying.

During the week, we’ve also been reading The Puffin Book of Utterly Brilliant Poetry which has poems by  Roger McGough, Michael Rosen, Charles Causley, Benjamin Zephaniah, Jackie Kay, Spike Milligan, John Agard, Brian Patten, Allan Ahlberg and Kit Wright, and so provides a vast array and variety of poetry and writing styles, and engaging illustrations by different artists for each poet. There’s also an interview with each author, which I think will be great for exploration later on.

By the end of the week, Ameli was making up her own rhymes, and actually getting them right.

I see this week as a success!

stinky socks, poke you in the eye.

Away In My Airplane – A Book To Prepare For Travel
Bought Busy Bag Ideas
Projects and Activities With Badges, Awards Or Qualifications For Kids
{PlayLearning} Dr. Seuss Activities For Toddlers