Greenwich Planetarium, actually called Peter Harrison Planetarium, is a 120-seat digital laser planetarium, situated in Greenwich Park, London and is part of the National Maritime Museum. Every Tuesday during term time, (and school holidays and weekends) they have a special showing for children, in what is actually a very affordable and fabulously enjoyable day out. 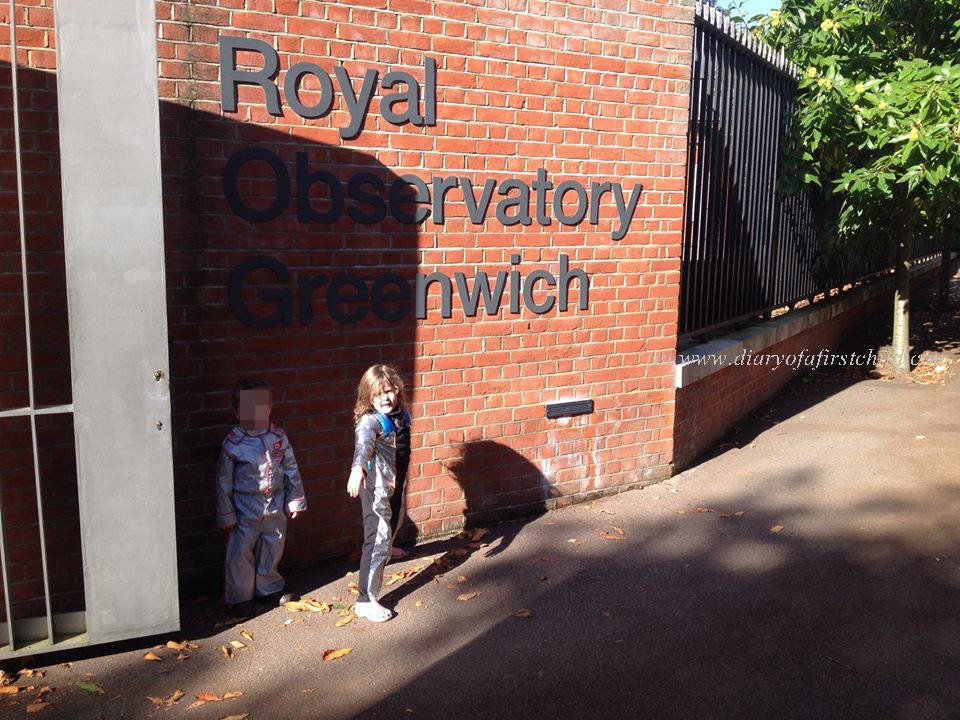 First a couple of negative points:

Since we had to travel to London and plan ahead for it, we set a date in our calendars well in advance, but didn’t actually book tickets because with little children, you never know what comes up on the day.

We chose the day we did, however, because the website said that it was a show for under 7’s – Space Cowboys.  On arrival at the reception to book our tickets, I asked for tickets for that and the man at the desk was really unhelpful and really miserable and uninformative.

He said the show for the day was “Meet the Neighbours” and offered no further info. I pressed for more asking if it was appropriate for under 7’s and he just looked at me and eventually said “It’s a family show”. It was like pulling teeth to get information! The woman sitting next to him just stared at me through the whole exchange! When we decided we’d go for it anyway, he  asked if we wanted tickets for the Observatory too. I asked if he could tell me more about it and he just gave me the prices, I looked at the children – who admittedly were lying on the floor giggling at the ceiling at this stage – and asked my friend Y if she wanted to get the combined tickets, when the man said it wasn’t really appropriate for children! (So why ask me in the first place!)

Our initial exchange was frustrating, but once we were in, we decided to start at the cafe and have an early lunch. There’s a lovely outdoor area where we could drink our bought coffees while the children had their lunch box snacks and have a bit of a run around after a long drive.

We also used this as an opportunity to work on a Space sticker book, which was perfectly aimed at the under 5’s. (Amazon has a few similar Space Sticker Books from DK) This was a great introduction to space, astronauts, things you can find in space and so on. 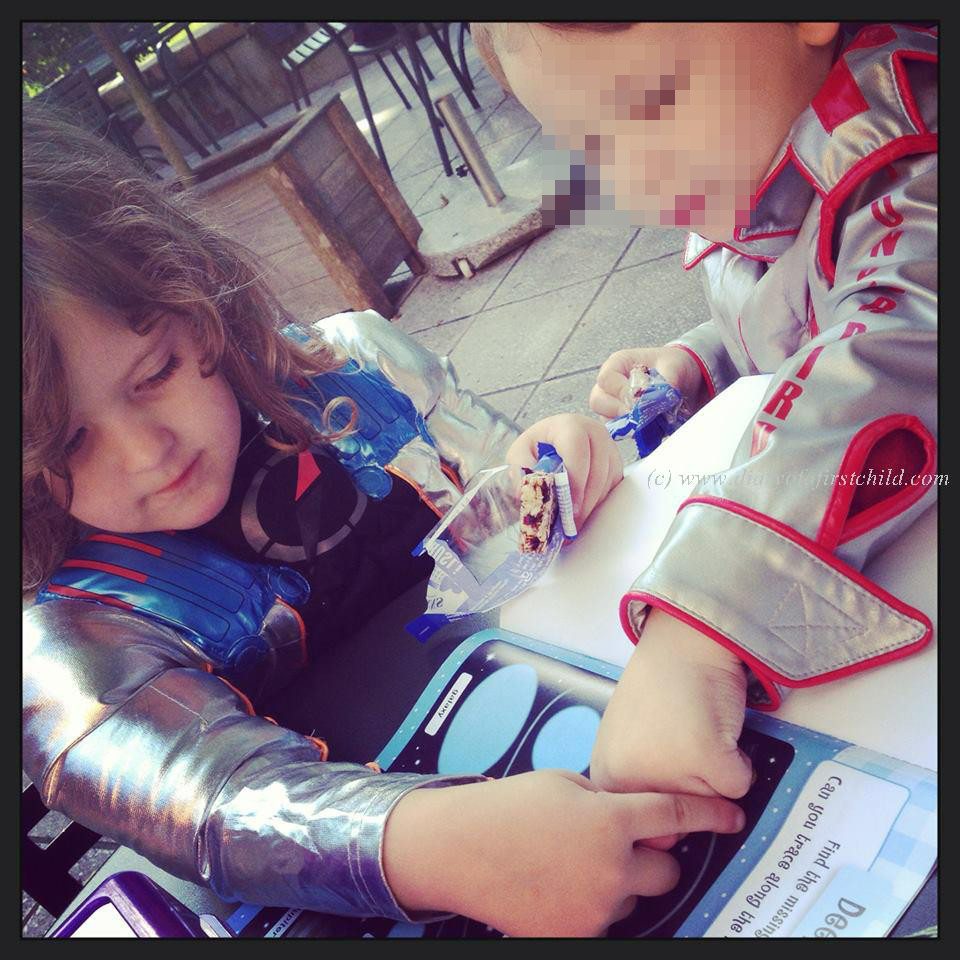 On the entry to the Planetarium there was a beautiful photo exhibition, The Astro Photographer of the Year exhibit, which gave us the opportunity to chat about the stars and other solar events – like the Aurora Borealis – before heading into the theatre. 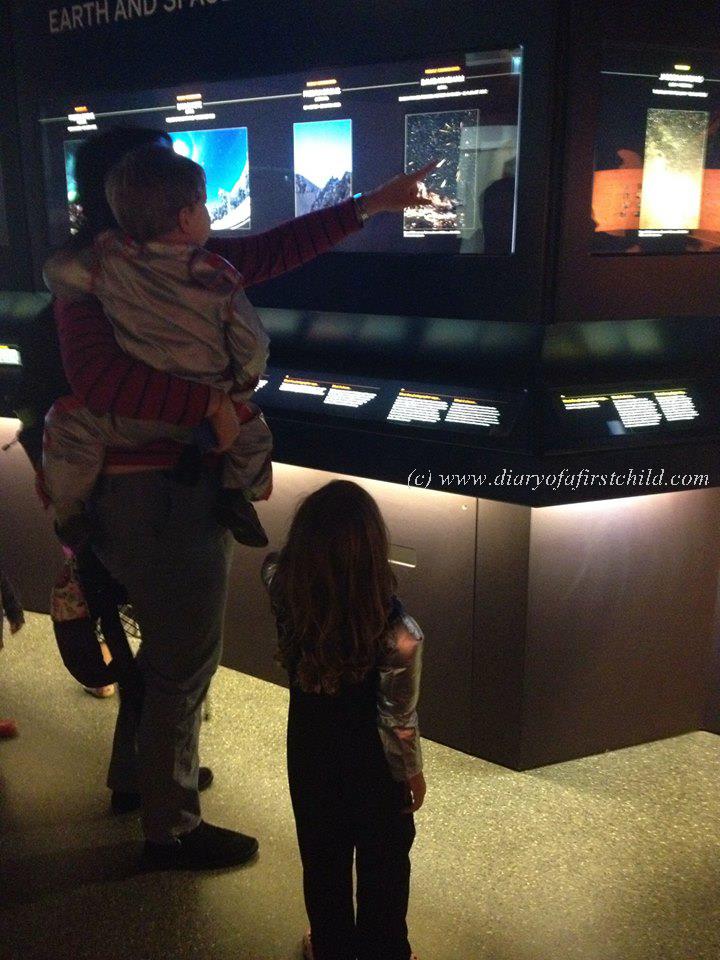 The staff on the actual Planetarium were fantastic. Ameli and her friend A were both dressed as astronauts, and the staff here were the first to give them any acknowledgement of that fact, something they were thrilled about.

They let the (most well behaved ever) schoolgroup in first, and then told our little astronauts that it was time to launch!

When we walked into the ‘theatre’, we lay back in the reclining chairs – Ameli and A both proclaiming how awesome this is – and waited.

Meet the Neighbours is a show about the planets next-door and the search for extra-terrestrial life. The show was presented by a lovely Royal Observatory Greenwich astronomer who allowed the children to ask questions after – although the show itself was pretty informative, and the school kids had more questions about the presenter (Rupert Grint, AKA Ron Weasley, although there was no Harry Potter connection in the show itself).

Inside the planetarium – for those who’ve never been to one – to roof is a curved dome, and the roof itself is the screen. This provides an almost 3D appearance, but also places the viewer in the centre of the action. It’s pretty phenomenal, and even the under 2’s in our party were enthralled.

The show lasted about 30 or so minutes, which was just the right length for the children, and while Meet The Neighbours wasn’t aimed at our children, it was animated enough and in the right ways that it engaged them and the school children equally. While many of the finer details of extraterrestrial life forms will have passed over their heads, the fact that they did in fact learn and gain from it was obvious afterwards, when we went through the interactive exhibits and looked at the different activities and experimental exhibits. Y and I were even able to launch (and crash!) a mission to the moon, I think it was. (There’s a reason NASA engineers don’t take their children to work, I’ll have you know!) 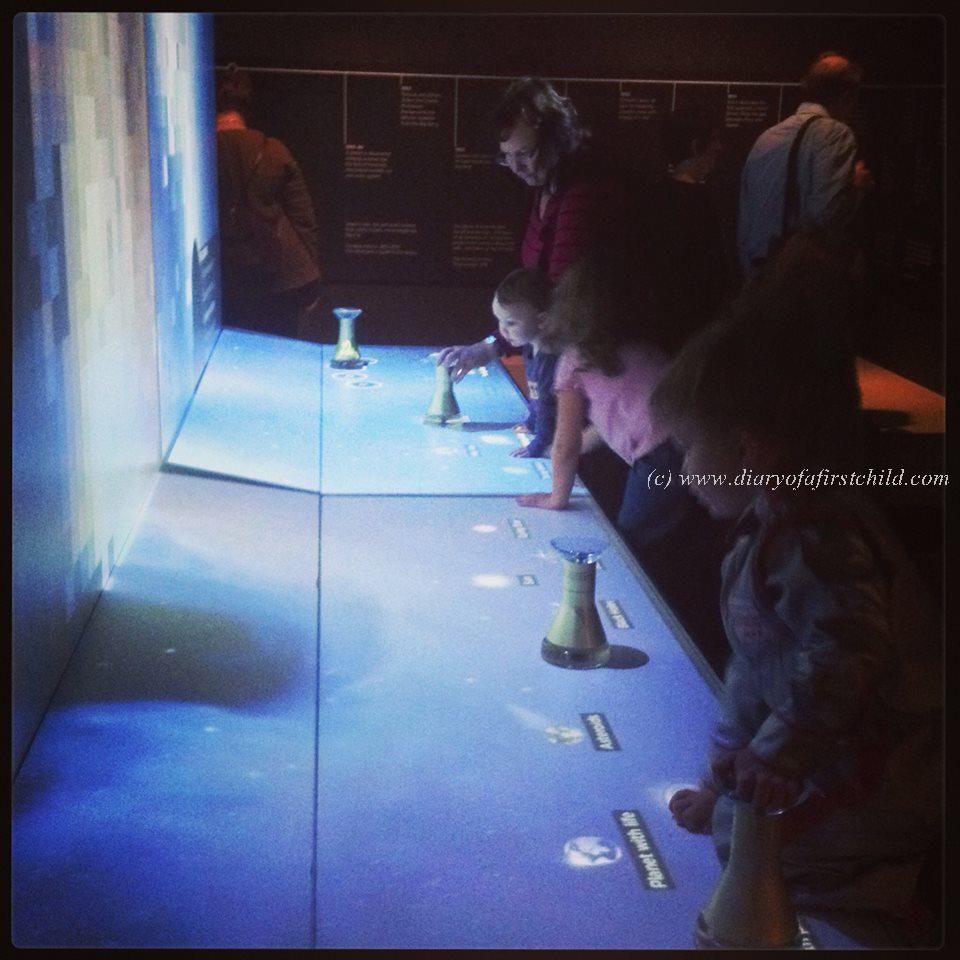 Overall, it was a fantastic experience, and I’m sad that even when we lived in Greenwich we just assumed the Planetarium would be too expensive, and never went!

The children loved it, and have already asked when we can go again! 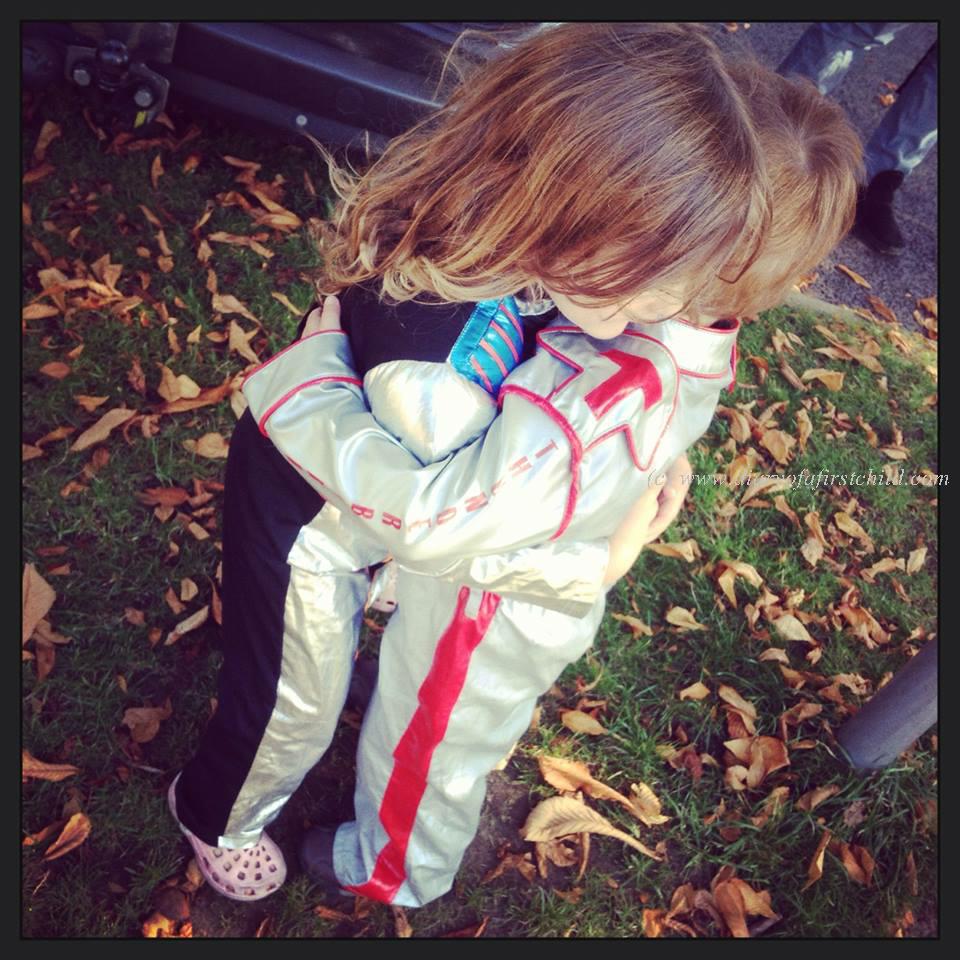 It’s in London, so you have to work out your travel and then add an hour or two to get from the outskirts of London into Greenwich, which isn’t in the congestion charge zone. (But you might travel through one to get to it).

Greenwich mainline station and Greenwich DLR station are about a 20 minute walk up a steep hill to the Planetarium. Blackheath Station is probably about the same, but approaches the planetarium from the back.

If you’re driving, there’s (largely unadvertised) parking via Blackheath Avenue. At the time of publishing, there is a four hour maximum parking time, at £1.20 per hour.

There’s a cafe on site, and gorgeous park land for picnics.

Find out more at: http://www.rmg.co.uk/whats-on/

Find it on the Mamaventurers map 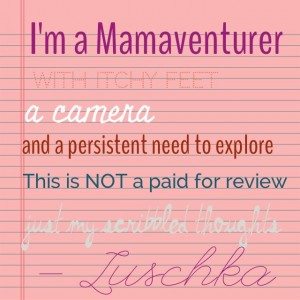