It can be hard to understand why your otherwise sweet child doesn’t want to share. Here are a few points for parents to understand this developmental phase, and ways to help your child through it.

As parents we have this unique and rather amazing ability to forget things. From pregnancy, through birth and seemingly into childhood (and possibly further) we forget the bits that admittedly, don’t always add anything positive to the story. I’ve seen my parents do it, and while I was of the firm opinion that I would never forget a weight, a height, a date of a first word, first whatever, the truth is, you do. Then you have a second (or subsequent ) child, and somehow, amazingly, you forget.

So when Aviya recently started shouting Mine! for… almost everything…., I was suddenly concerned. When did my sweet little genteel baby become so possessive? What did I do wrong. Were we missing out on something fundamental to her development? Aren’t second children supposed to be better at sharing than their older siblings… oh, wait…. that’s right – Ameli did  go through something like this. In fact, Ameli was 23 months old when we met our current friendship group, and the first few months of our meetings, I thought they must think me a horrible mother because all my child does is grab, and shove and say MINE!

Then, Ameli being six months older than most of the rest of her group, six months later I started noticing the rest of them had entered this phase and I felt such relief! My child wasn’t turning into a psychopathic monster after all! And then… then I forgot all about it. What is that about?

Anyway. Armed with the wisdom of two and a half years later, and faced with a 23-month old there are a few things I’ve learned along the way, and partly to remind myself and partly to help those of you who are facing this for the n-th time 1 here are a few things to remember about children and sharing and a few gentle ways to help them through this developmental phase:

Think of children in terms of your best friend. How would s/he feel if you took their Kindle/iPhone/iPad and made them share it with the guy/girl you met in the coffee shop this morning? Your child feels the same about that doll/car/stick/leaf.  It’s worse about things they have a real attachment to, but anything that is your child’s sudden favourite is really important to them.

Instead: Offer an alternative. If it’s something your child really doesn’t want to share, ask them if you can keep it safe until they are alone again. If you’re asking, accept that the answer may be no. Remember that you can’t teach ‘don’t snatch’ by snatching it away from them. 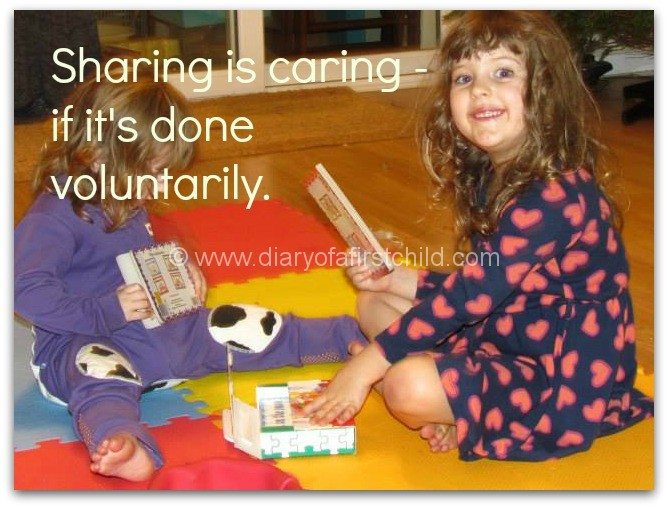 ‘If you don’t want to share, Johnny/Sue won’t want to play with you‘ sounds a whole lot like ‘If you won’t sleep with him, people will say you’re seriously lame and uncool‘ to me. Not the words, obviously, but the sentiment. I don’t want to teach my child that to be socially accepted she has to willing to do whatever is asked of her.  (By the way, there’s a difference between that, and saying ‘if you hit your friends, they won’t want to play with you’. That one is simply true, and logical and pretty much applies in adulthood too. Unless you’re in a boxing club.)

And the truth is, it’s often less about the children than our embarrassment about what people must think.

Gosh – I’ve uttered those words to my husband so many times. She’s t-w-o. (not even). Don’t expect six year old behaviour from her. Understand that this is a phase and that it will pass. Your goal isn’t actually – shouldn’t be, anyway – to make her share everything. Your goal is to help her understand why we want to share some things with some people.

Cornell University 2 did a very interesting study on preschoolers and sharing, where children were divided into three groups – one group had to share stickers with a puppet, the next were given a choice between keeping stickers and throwing them away, and the third group had to choose between sharing with the puppet or keeping their sticker.

Interestingly, the children who were given the choice of sharing the sticker or keeping it for themselves, when presented with a new puppet and more stickers to share were the ones who shared the most. Read the full study on toddlers and sharing here. It’s really interesting reading.

In light of my recent amazing introduction to decent tools for positive parenting, here are the steps we take when Aviya either melts down because her big sister dared look in the direction of something that’s hers: 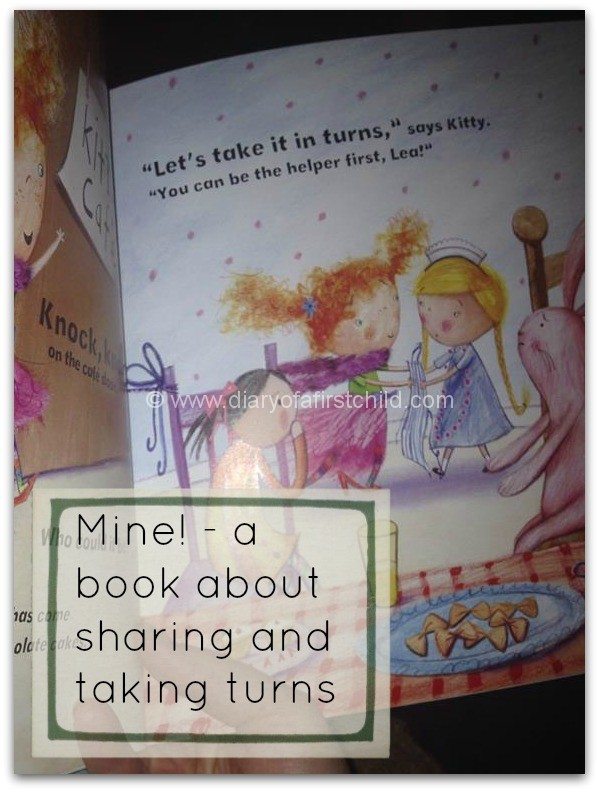 “I can see you feel angry/hurt/upset/frightened”

“Here are your options: we can put the toy away, or your sister can play with xyz for two minutes while you watch, or you can swap toys and play with each other’s special toys, or you can go play with your own toy somewhere else.” The problem with giving options is that you have to be able to follow through – “should we go home and you can play with your toy alone” given as an option, means you have to be willing to go home right away.  Don’t offer it if it’s not an option, and an immediate viability – “share or she won’t share her toy with you later” means nothing to a two year old with no real concept of the passage of time.


3) Highlight the benefit of positive behaviour, without being punitive

There’s a definite difference between “look how sad your friend is because you wont share” and “you shared and your friend is really happy”. The one is guilty manipulation and the other is pointing out the consequence of a behaviour.

If they choose not to share, divert attention to the other child for a minute. “Aviya really doesn’t want to share her special toy at the moment. Why don’t we let her play with it for now and you can show me your special toy?” Chances are the introduction of something else that someone else wants might just provide the motivation for the first child to share their toy after all.

Does this take longer than just snatching the toy from your child and giving it to the other child – something I’ve sadly been guilty of! Of course it does. Are the long term effects worth it? Of course.

There’s nothing wrong with a child having a sense of ownership over their items, and I find especially with second child, so many of their things once belonged to an older sibling, that having things specifically ear marked as theirs is very valuable. And after all, if they care about something, they’ll care for it, and we really do want them to have that sense of ownership so that they will learn to care for their things too.

Remember that modelling is really important to children. They will do as they see us do. (And if you want to read them a story about sharing, Mine! is a great place to start.)

And most importantly, it is a phase. It will pass. What matters isn’t what is and isn’t shared, but how their relationship with the other person – especially in the case of a sibling – is affected going forward.