I saw an ad recently that asked for bloggers who did a lot of crafts, and since that’s us, I signed up. A few weeks later a box full of Halloween Craft goodies arrived in the mail, and we had a fun time sifting through all the supplies that arrived.  I decided that rather than simply do parent led crafts (there is one!) I’d allow six year old Ameli to decide what she was going to make with the supplies that arrived. She decided on a spider and a clock, and then we worked together on a Ghost-in-the-box. 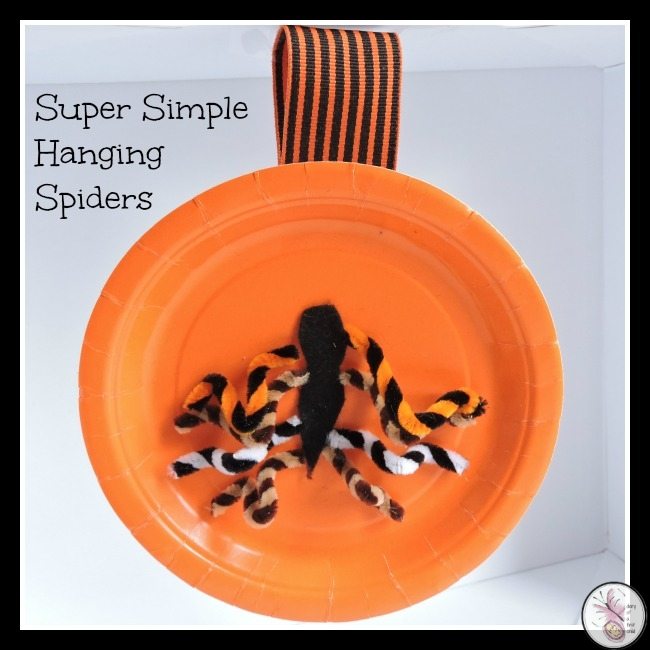 For this craft you will need:

To start with, prepare all the parts. The spider body looks like an 8 without the centre holes cut out, and the legs should be cut to eight equal sizes. Bend the legs into a square root symbol (

) which you’ll turn upside down.

(The Bostik Glue Dots are great as you simply lay the felt onto the dots, pull it back up and lay it down onto the paper plate, no mess, no waste.)

Stick the spider body to the middle of the plate.

Next, stick the two flat parts of the pipe cleaner ‘legs’ to the glue dots, then onto the plate, trying to get the bit that attaches to the body as close as you can to the body.

Continue this till all eight legs are in place.

You can fold a strip of ribbon double and attach the two ends to the plate (again, the glue dots work well here) to hang it up with or just leave it as a freestanding spider – on – a – plate.

I wanted to add some googly eyes too, but my daughter thought that was too scary. 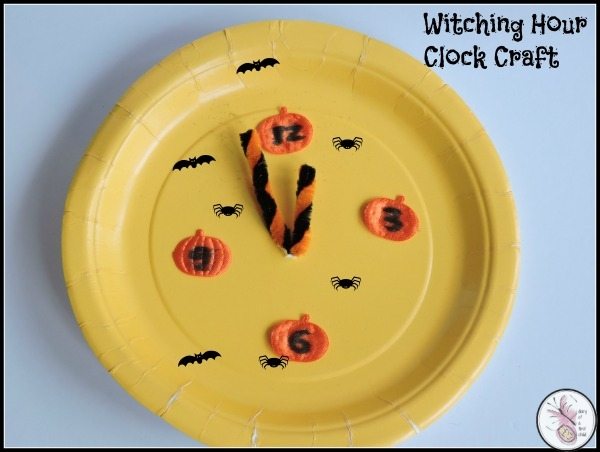 Ameli has been learning to tell the time recently, so she decided she wanted to make a Halloween clock.

For this you will need:

Pierce a hole roughly in the centre and fold a pipe cleaner in half. Make a knot in the back to keep it from slipping out, and cut the front facing parts so that you have a long hand and a short hand.

I called out times, and Ameli set the clock to the right time (mostly) before deciding that the clock had stopped, and with it, the game. 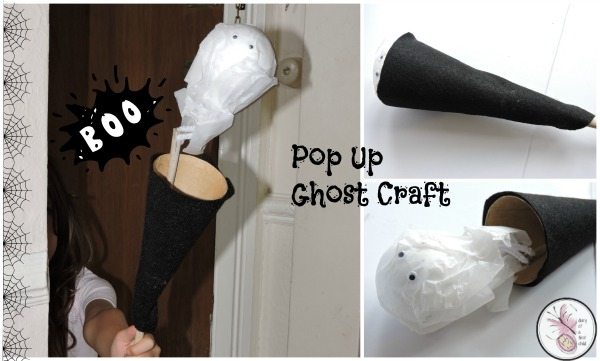 For this craft you will need:

Cut a hole in the top of the cone, just big enough for the stick to pass through.

Apply glue to the polystyrene ball and wrap the paper around the top, allowing the bottom to hang loose in the way ghosts are pictured.

Stick the wooden stick through the bottom of the cone, then attach the pipe cleaner to the stick. With bamboo you can glue the pipe cleaner into the bamboo, leaving it to dry so that it is secure.

Stick the two loose ends of the pipe cleaner into the bottom, uncovered part of the ‘ghost’.

When all the glue is dry, pull the stick away from the ghost so that it lowers into the cone.

Walk up to an unsuspecting victim and with a ‘Boo’ push up on the stick so that the ghost jumps out of the cone.

It’s really quite more fun than it sounds 😉

We were sent a box of tricks from Bostik and tasked with making Halloween themed crafts.

How (And Why!) To Nurture Creativity in Early Childhood
How To Make A Bird Mobile
The Snowman – 24 Days of Christmas Crafts {Literature to Food}
MagnetCubes CoasterCube Modular Magnetic Marble Rollercoaster