Ameli loves Lalaloopsy, so when I was asked if we’d like to be Lalaloopsy ambassadors for the year, I thought with her birthday coming up it would be a great way of spoiling her a little, without having to cost me much! Just after her birthday we received our first Lalaloopsy toy for review: the Lalaloopsy Jewellery Maker (or Jewelery Maker if you’re in the US!) 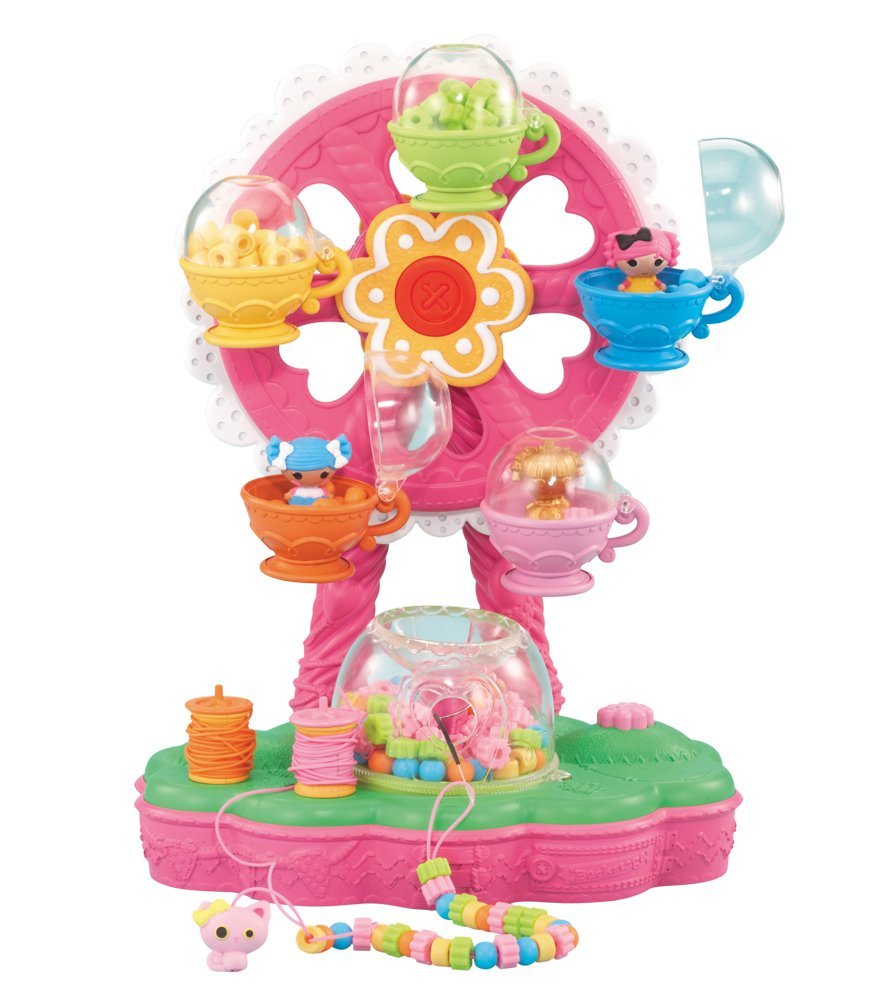 As a toy it has little tea cups with lids that the Tinies can sit in as they go on the ride, which can lead to lovely imaginative play as the children describe the ‘view’ over the ‘landscape’ from the ferris wheel. It’s also a good safety talk introduction as we discovered when one of the Tinies plunged to an untimely death when the lid hadn’t been closed, and received a spin from a ‘helpful’ little sister. (You’ll be pleased to know she was resurrected by a kiss and a cuddle).

As a Jewellery Maker, there are pros and cons to this product. I think if used in conjunction with regular manual threading of beads, it’s just a bit of fun. I wouldn’t let it be the only means of threading beads for my girls though as there’s a lot of developmental value in terms of both dexterity and hand eye coordination that happens when children try to string beads.

That said though, the jewellery maker is fun as it allows children to thread the provided plastic ‘string’ and feed beads into the receptacle, which then shakes and vibrates the beads onto the ‘needle’ feeding it onto the string. In this way kids can create a pattern and make their own jewellery.

There are enough beads for about two full necklaces, and about the same in string, but you can add any beads that have at least a 2mm hole, and you can use any safe string too, so it can be a gift that keeps on producing.

I would have liked a closing container for the beads so that they don’t end up filling up every nook and cranny of my house, but I imagine most crafty people will have something they can use.

Battery life on the Lalaloopsy Jewellery Maker seems to be pretty decent, since it only powers a little spindle, really, and it long outlives the beads. It’s unfortunate that the ferris wheel itself doesn’t actually turn when the button is pushed, but I guess when you’re threading jewellery is no time to be distracted by fun on the fairground.


I was sent this toy for free as part of the Lalaloopsy Ambassador Programme. Views and opinions are my own (or that of one or both of my daughters!)