These last two weeks have passed in such a blur of activity and emotion and ‘baby stuff’ and ‘life stuff’ that I feel a little like my head is reeling.

My midwife never turned up for our 33 week appointment, so I had a day at home just waiting, but honestly, nothing more eventful happened the whole week.  At the rescheduled appointment at 34 weeks, she prodded and poked and pushed and then prodded some more, but could not find your head at all! That was slightly worrying from the positioning point of view. By this stage we really want you to be head down:

However, you were not head down, but seemed by the shape of my belly to be either breech or transverse:

That can be a really big problem, because in the case of breech the midwives would not want me to have the birth at home, and in the case of transverse they would try to make me have a C-Section, which I really really do not want!  I started doing a whole range of exercises and movements (on hands and knees, tilt the pelvis in and out, do a figure-of-eight and rotate hips;  lie on your back with legs and bottom against the wall and tilt pelvis; bounce on a Swiss ball; always sit with knees lower than hips, just to name a few). At our antenatal  class this week the midwife, Sofie, checked me again and she said that although your head was not engaged (which is fine) you were head down again. I was so happy!

They say that babies sleep most of the day in there. That’s understandable, since there’s not a whole lot else to do, and whereas in the past you were very quiet during the day and got quite active at night, you now seem active all the time! You’re a little energizer bunny, constantly on the move. This does not bode well for peaceful sleep for Daddy and me again, well… ever!  But I do love feeling you kick, and as you get bigger and your space gets more limited, your movements are becoming bigger too. Sometimes Daddy can see you moving from across the room! It’s very cute and makes me laugh often – especially when you retaliate to being poked at!

We had a great antenatal class on Thursday. It was really one of the more important ones for me – the life with baby stuff. How to fold a swaddling cloth, how to lie you down, change your nappy and so on. I found it really useful! We learned about the things that make babies cry, like hunger, temperature, being ill, need for comfort, nappy change and so on. Sofie said that  parents usually eventually get to know the different cries, and what they mean. I’m sure my parent friends will have their own thoughts on this, but it did provide some comfort! 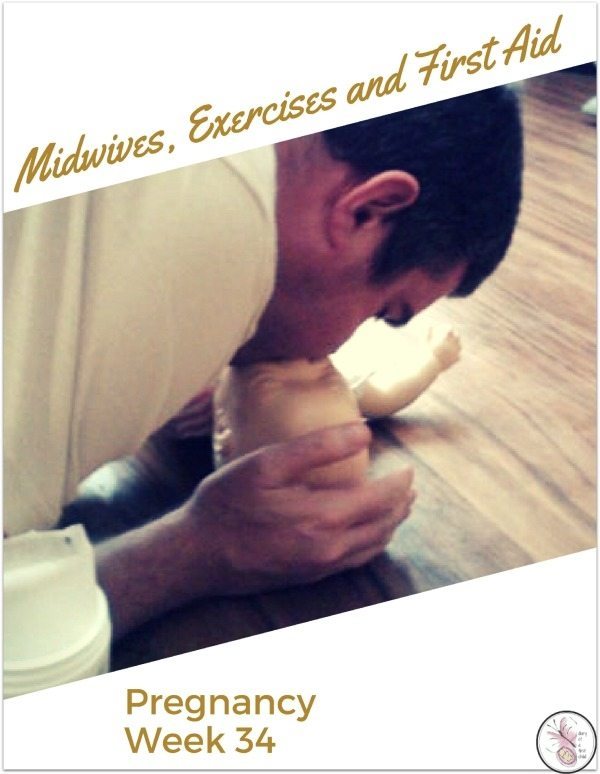 Today we attended a Pediatric First Aid class. Many of the principles remain the same, like the old ABC’s – Airway, Breathing, Circulation, and the ‘rules’ are the same. Such as firstly checking the room for any signs of danger, like a gas leak, but there are differences between first aid for adults and that for babies. For baby CPR for example, you cover the nose and mouth with your mouth, whereas with adults you pinch the nose closed.  For baby compression you use two fingers to compress, whereas for adults you use the heal of your  hand, and so on.

The procedure for choking is also different. With a baby, you turn them upside down down your leg, whereas that would be somewhat harder with an adult.  One of the mom’s in the class said that she had attended a class before the birth of her son, and when he began choking recently she vaguely remembered what to do (he is now 10 months) and decided to do the class again to refresh on everything now that she can put it in the context of actually having a child. I can’t imagine how scary it must be though. It is always useful to read about these things, and look at pictures in books, but being able to practice on a doll that makes sounds and movements when you do it right (like coughs up a little bit of rubber when you apply the correct force to the back!) really helped me to understand the force and pressure that you need.  As Sue (the instructor) said, broken ribs heal, but stopped hearts don’t.

I’m starting to feel a little more prepared now, and beginning to slowly feel as confident in the ‘having a baby’ as I am in the actual process of having the baby! Of course there is much to learn, and I’m sure I’ll make many mistakes, and a lot won’t be as it is in the books and the manuals, but there are a few core things that I think knowing, makes easier.

Tomorrow we do a practice run on the birth pool, which I’m really looking forward to, and do a few more bits and pieces in your room, and then rest and prepare for my second last week of work!

Being around all those babies today made me really excited to meet you.

Love you my Button.
Mommy