I never thought I’d say it, but here it is: we had a great day out at Legoland Windsor. I was expecting a relentlessly garish onslaught of consumerism in the baking sun surrounded by mobs of tired parents worn out by sugar-possessed children. I was anticipating loud showground-style thumping, pumping music, and dreading the inevitable money haemorrhaging that occurs on such occasions. In the end, I was shocked to find Legoland is not like that at all.


When we first arrived, though, I have to confess my heart sank. Just one hour after opening time, there we were being directed to parking lot D, meaning parking lots A through C were already full. Great. And there was no sign of it stopping, either: we were one of the first cars to park in lot D, and by the time we had lathered on some sunblock, the car park was more than half full and some cars were already being directed on to the next lot. 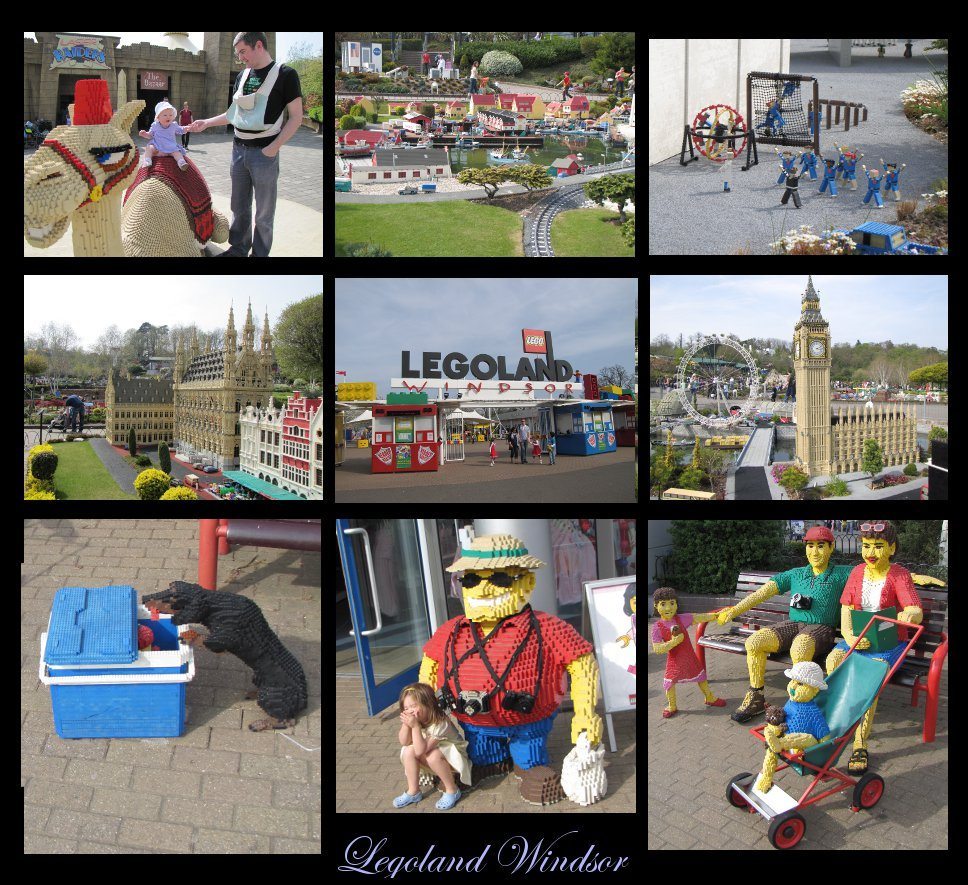 recommended, not only because it’s cheaper but also because you get to skip the queue. Once we walked in, we were immediately confronted by the medium Lego shop â€“ no surprise there! Cynically, I expected it to be very expensive, but the prices are the same as Lego’s online store.

We then ventured down the hill to the ‘Land of the Vikings’ which, considering the amount of cars outside, we found remarkably quiet. Having said that, the queues for the rides all had between a 30 and 70 minute wait, even so early in the day. As the rides all have height restrictions, we decided not to even bother, as our daughter wasn’t tall enough for any of them and neither of us was so keen that we were willing to queue for an hour on our own while the other sat on the sidelines waiting. So instead, we simply spent the morning walking around looking at the rides, the Lego ‘statues’ and decorations and watching the people.

We made our way to Lego City, the central food area which has a number of shops, a cash machine and fast food places, as well as a central theatre area in the shape of a ship, placed on a medium pond. They have live performances here â€“ based loosely on the Lego Pirates theme, but we missed the lunchtime performance queueing for food.

Speaking of which, I was both surprised and impressed by the fact that they have no problems with people bringing their own food in. There is ample place to sit and eat, and while a Saturday near the end of the month is always going to be busy, we did see a few out-of-the-way spots where you can sit on the grass and get a bit of respite from the hustle and bustle.

After eating a really medium hotdog, we went for a ride on the train â€“ the one ride we did go on â€“ which gave us the opportunity to see more of the park and the Lego animals, men and nursery rhyme characters dotting the landscape. The only disappointment was the duration â€“ it was over in barely a few minutes, hardly an unforgettable experience considering the train was moving at little more than walking speed

We made our way to the Duplo Land area, which is aimed specifically at younger children. They have a fantastic medium play area with rubber flooring and jungle-gyms and other typical playground equipment. There is also a water slide and water fountain the kids can run around in, so make sure to pack costumes, and there’s a miniature golf course to entertain dad too.

By far the most amazing part of the day for me, however, was Legoland’s miniature world. The Lego models of Italian villages, Dutch landscapes, Mont St Michel and Sacre Couer in France, and several of London’s landmarks, as well as working model of Dover port and working ferries, boats, trains and even a limousine were unbelievably well done. We spent over an hour in this medium section of the park, and I took most of the day’s photographs here too.

Despite my initial dread of what the day would be like, we had a truly fantastic time. There were a lot of people, but it never felt overwhelming. In the areas that did have music playing, it was understated and complementary, and not at all aimed at psyching the children up or wearing the parents out. In fact, I don’t think I’ve ever been to this sort of amusement park before and seen so much effort going in to making sure you have the experience YOU want, not one that’s forced onto you.

Although there were plenty of shopping areas, it didn’t feel commercially driven and if you packed your own lunch and were disciplined the day would not have to cost you any more than the entry fee. Personally I felt the Â£60-something for two adults and a baby was rather hefty, but if you were of a mind to go more often, an annual pass would definitely be worth it.

Tips for the day: