My family and I attended the Land of Kids Festival in Hackney, London today. I was thrilled when we were invited because we pretty much end up doing nothing most Bank Holiday weekends, and this one we were sick for most of it to boot. While none of us are back to 100% health, we decided to make the hour’s drive anyway, and have a family day out.

The Land of Kids Festival is a new one-day, part-indoor, part-outdoor family festival. It’s essentially a collection of workshops, activities, crafts, music and interests all aimed at 2 – 12 year olds.

We arrived in Hackney and found parking. We walked up to the ticket office since we had complimentary tickets and were turned away to line up in the queue which was a mingle-mash of people with tickets and people without. The queue stretched around the block and down the road – a busy main road, lined with bored children and a not moving line. It was a nightmare.

We also knew there would be food inside, so hadn’t eaten and were all hungry. Only later did we find out the food area had free access – it would have been great to be able to get food and come back when the queue was shorter. The reason, it turns out was a safety one: every child was being registered with their parents phone numbers inside their wrist bands in case they got lost. Nice idea, terrible execution.

An hour later we were inside, parched and starved, so we went straight to find food, and from there on out, things got a lot better.

From the food court, which had lovely variety, great food and brilliant prices – the most expensive thing we ordered was £6, we went through the Eastern Curve Garden. This is a spot I’d love to revisit if I ever find myself in Hackney again. It’s a hidden garden in the middle of bricks and cement, a beautiful space, full of bees and butterflies and flowers and herbs and everything beautiful. I’m not sure if it’s a community garden or what, but it’s gorgeous. 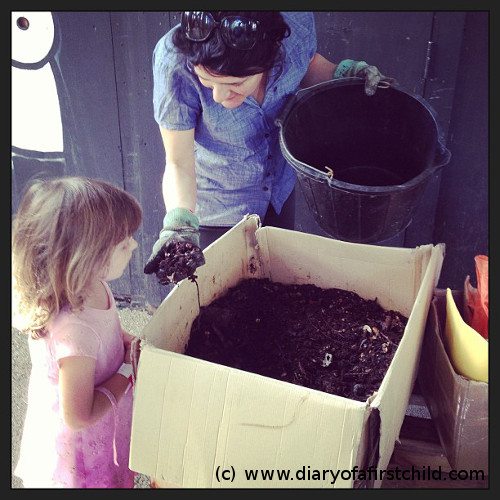 There we had a fantastic one on one session with a lady who makes compost from ground coffee. Apparently tomato plants really love it. She helped Ameli plant a runner bean seed, which we then carried around with us for the rest of the day. There was also a seed bombing workshop, where you could make mud balls with seeds in them, but they didn’t have anything to put the balls into, or anything to clean hands with after making mud cakes. 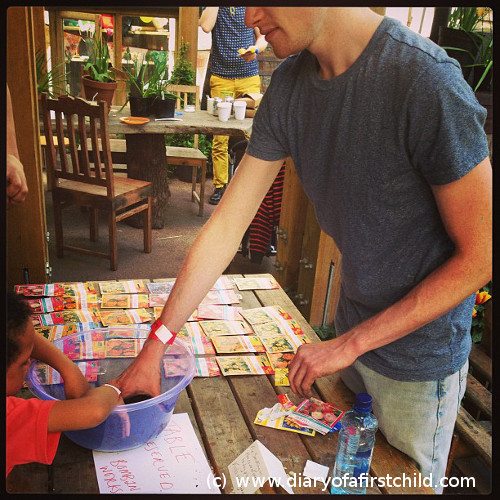 We skipped that, and walked past the recycled tubs and bins ‘drumming circle’ which the children were all enjoying, and the animals, through the tent with a band playing – Ameli complained it was too loud – and made our way to the Studios for one of the long list of activities that were on in a few different venues.

Some of the things we were interested in attending were:

We made our way up the stairs of the studios, but they were packed with people, so we waited. The we waited to get into the Pirate School. I’m not sure how long. The Pirate School was fantastic. Ameli loved it. We loved watching her love it. She had such a great time. 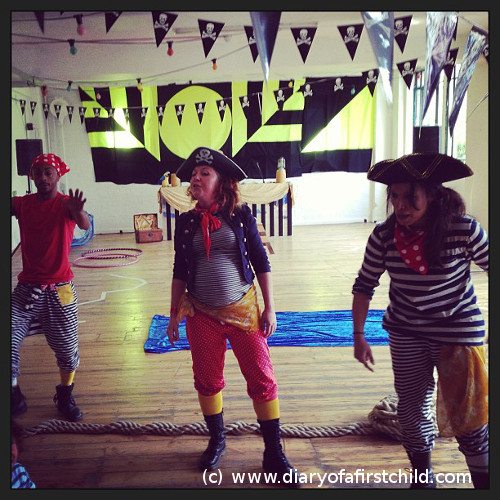 We went across the hall to another room because Ameli had been asking since we arrived to have her face painted and we were right there. And there we stayed. This room had a range of activities: a treasure hunt, a shoe-painting workshop, a magazine making workshop, nail painting, a cardboard city craft table, and something else with wool. The face painting had two people working very hard, but even so we queued for almost an hour – 55 minutes – and since there was no identifiable line, people kept joining it at the front, contributing to the wait. It was so frustrating.

By the time we’d taken queuing up in shifts, and Ameli and I had looked at doing some of the activities, and then gotten back in line, she finally got her face painted, and she was thrilled, but we had about had enough. It was after 4pm and we still had the drive home, and we were done. 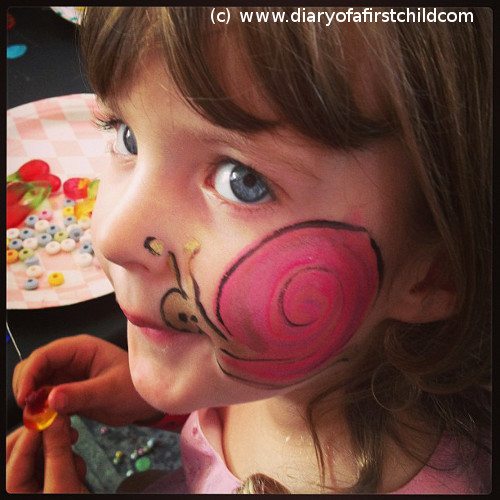 On our way out we found a sweet threading table, where Ameli got to sit down immediately while they made up a plate for her, and she began threading. It’s a good thing we didn’t go to the toilet first though, because two minutes later they had run out of string, and were giving kids pictures to colour and saying come back in half an hour.

We went to the toilets – which were nicer than I expected! – and made for the car.

Having spent over 2.5 hours of a 5 hour visit queuing, (we needed to be able to get the kids home at some point!) we missed out on some amazing sounding things, like the poetry take away, unbirthday party, and the fantastic sounding Carousel.

So… what do I really think? I think it’s a fantastic idea, and I love the different activities, but the execution needs improvement. I think this was their first year, so I hope they work on the practicalities – they had way too many people in too small a space in especially the things relevant to smaller children. The queues were too long, definitely – actually not even too long, just too slow! Also, the fact that they ran out of things – the treasure hunt also ran out just after we got there a few hours into the day – early on or didn’t have them on hand shows either way too many people, or not very good planning.

My husband, when asked, said that if we’d paid £60 for our family of four, he’d have been very upset: not because of what was available, but rather because of how much we ended up being able to do.

Ideally, a festival for kids should also start earlier and end earlier. An evening disco isn’t aimed at 2 to 4 year olds, I’m sure, despite the UV bubbles.

Would I go again next year?

Weeeeeeell… they’d need to improve a handful of things, definitely, but yes, having been once and since we have a better idea of what’s where and how it works, I’d go again, and next time, I really, really, really, really want an invitation to the Unbirthday Party.

Update: I received this message after the event:

The Magic of Legoland, Windsor
The Tiger Who Came To Tea Live In London
National Trust #50Things And Yeo Valley Organic Garden, North Somerset
Pic Of The Week 52-16