On Sunday we had a spectacularly rare event: a family day out. It’s normally one of us, going out with the children to give the other some time off. It’s rare that we all go out together, so this was blissful. We also often go to Legoland Windsor, because it’s pretty close to us, so with annual passes and a parking permit, it’s essentially a ‘free’ day out. 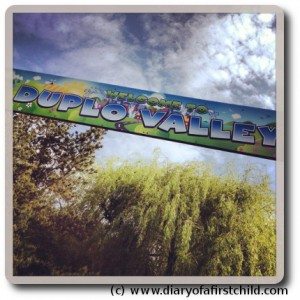 However, because we only have one ‘guardian’ pass, only one of us gets to go with Ameli at a time – being under 3, Aviya goes free anyway.

On Sunday we were invited to the grand opening of Legoland Windsor’s Duplo Valley. We arrived nice and early: 9am, and received a goody bag with the Lego Duplo Zoo set for each child – we already have it at home, but now we have enough animals to fill an ark. We received some colouring books, a height chart and similar Lego Duplo themed goodies, and Lego ‘loot’ – £30 vouchers that we could spend on anything we liked at Legoland Windsor.

That was a real treat for us, because we never buy stuff at Legoland, and we never do any of the paid extras, like the Gold Wash, but this time, we did. 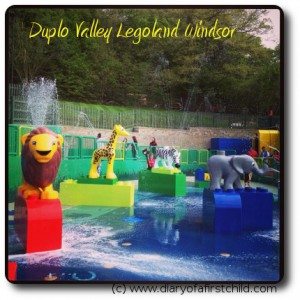 We walked down to the new Duplo Valley area, and were met with life sized Duplo animals. There were so many oohs and aaahs from Ameli, she looked awestruck. The water was switched on after a countdown and the play area filled with toddlers, children and a few brave mothers.

My children really surprised me: Ameli, the confident and outgoing one didn’t fancy the water, so she went to the newly renovated play area, while Aviya, shy and clingy was off and into the water, despite shivering and turning slightly blue. She just loved it.

We didn’t stay too long, as she was really cold, so having her dressed we explored the top play area, with it’s huge bucket of drenching water – you have to be in a costume to spend any time in this area, and for good reason – we went to join Ameli and her daddy in the play area. 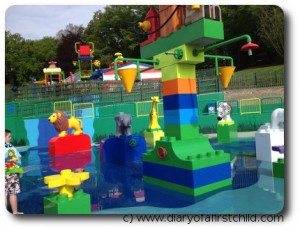 This section has also been awesomely redone. Ameli loved the pink castle, with it’s brilliant little touches like the ‘mirror mirror on the wall’. Personally I thought the police station was the best. There’s a photo wall for criminal style photos – although somewhat inaccessible, but it worked out ok. There’s also a ‘wanted’ spot, perfect for photos. Down by the jurasic dinosaur jungle play area there were spider wires for (slightly older) children to climb. Ameli struggled with it a little, but the ‘grass’ in that area is awesome. It’s so springy! I loved it. 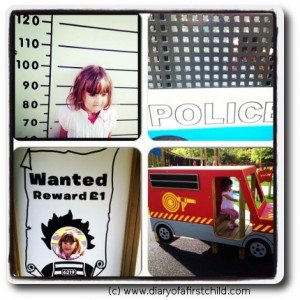 The entire play area is fabulous. Seriously. I would love to have that in my back garden. Although to fit it all in, I’d need to demolish the neighbour’s house. I’m not sure they’d be as thrilled.

We also went on the Fairytale Brook boat ride. This is my almost favourite ride in Legoland, because it’s the very first one we ever took Ameli on, and it’s always held a special place in my heart. We went on it again this time, and they’ve redone many of the models and it just looks fantastic now. Aviya was wide eyed with wonder. I’m not sure what her 14 month old mind made of it all, but it was wonderful, and calm and relaxing. We thoroughly enjoyed it! 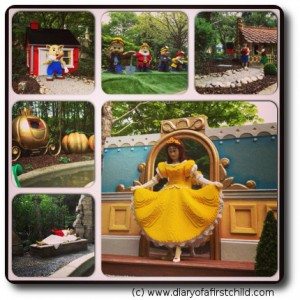 We spent the rest of the day in the other areas of Legoland, before returning to Duplo Valley again in the afternoon to see a show at the Theatre. The girls loved it and even Aviya got involved. Her understanding of what’s going on around her both surprises and excites me.

We also went to the 4D cinema again to watch The Legend of Chima again. I adore 3D/4D cinema, and this one is specifically awesome. I’ve been to the one in Drayton Manor, and while that had gorgeous seats and this is just concrete flooring and nothing fancy, the effects here are way better. They’re incredible, with live fire, ‘snow’, rain, wind and beautiful 3D. I love love love it.

Other highlights of the day, aside from the obvious Duplo Valley experience, were panning for ‘gold’, and having Q-bot access. When we turned in our gold findings, Ameli received a metal ‘gold’ medal for her efforts. I was so impressed that it wasn’t cheap plastic. She’s worn it every day since. 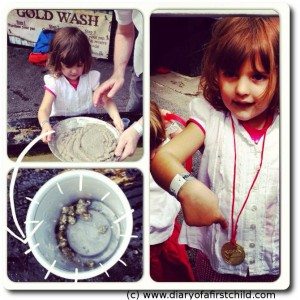 We never go to Legoland during busy times, but having done so this time, I know for certain I’d always get Q-bot if we did. It takes you to the front of the queue and means you rarely wait for a ride. Even on rides that had a 45min wait, we went straight to the front of the line. I did feel a bit bad, but only for a moment or too, then was too distracted by the ride to worry further! I would always go for Q-bot if we went at busy times.

We also went on another favourite ride: Submarine Atlantis, which takes you through a large fish tank in a glass bottomed ‘submarine’. It’s a brilliant ride and the girls get so excited by it!

The only negatives for the day were our food choices. Having never eaten at Legoland Windsor before, we were led by our hunger and just ordered wherever we were. I wasn’t overly impressed by the Hilltop Cafe’s £7.95 breakfast – although they were really kind and replaced it for me when it came out with beans, a food I cannot even look at without gagging! There were much better food options at the Castle and by the Pirate Show, but by then we’d eaten and used our food vouchers. I do think the food is generally well priced in other areas though, and some of the food places did look fantastic. We just made a bad choice. 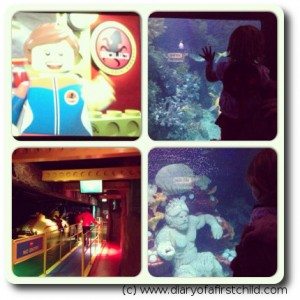 If you are going to go for the day, I recommend ending your day with Duplo Valley, so you can get wet, and dry off and go home, so you’re not carrying wet stuff around with you all day. Also, do yourself a favour and make sure your children are the right height for a ride BEFORE you queue up for it. Ameli is over 100cm, so she can go on everything with one of us, but Aviya can’t yet, so with two adults that’s fine, but with one adult we just skip loads of the rides.

The changing areas in Duplo Valley’s Animal Safari Water Park are lovely, new, bright and clean. I just hope they stay that way.

Would we go again? Well, the girls were at Legoland with their daddy on Thursday, and we all went on Sunday, and they’ve gone back again today – Tuesday, so I’m guessing the answer is yes!

There were a bunch of other bloggers at Legoland over the weekend, and people tweeted and Instragrammed using the hashtag #loveDUPLOvalley, so you can see more images there, or read some of these reviews: