This may come as a surprise to you, but I’ve always had a great love for BMW’s. I think it’s because my parents had a succession of them when I was a child and I have some latent memory of that. When I became a lover of formula one, my team was BMW, and the first ever race I attended – the Malaysian Grand Prix 2002 – had Ralph Schumacher as the winner and I was elated to have a BMW win.

My love for BMW’s runs so deep that in high school I had a bet on with one of the guys about who would be the first to own one. He went on to become a professional tennis player, so I suspect he won that bet, since I still don’t have one, but I did add it to my 30 things to do before I’m 30 list. As it turns out, the day before my 30th birthday there were two things I hadn’t done yet: bought a BMW and had a child. I went into labour on my 30th birthday though, so I think I can tick that off the list as completed, sort of.

I’m telling you all this so you’ll know that AP, natural, breastfeeding, cloth using, chemical-reduced living ol’ me has another side that you didn’t know of: a passion for all things Bayerische Motoren Werke AG, even as tenuous as loving Munich, where their head office happens to be.

Soooo, when BMW contacted me a few weeks ago and asked whether I’d like to attend the Henley Festival with them, and then drive away a car for a few days of testing, there was nothing – or at least very little – that was going to stop me!

On Sunday, I got donned up in my nicest evening gown, complete with shiny neck details, and put make up on – more than just eyeliner too – and real earings – like, not the stuff you wear while babywearing! I put on some big heels, and waited for my lift. 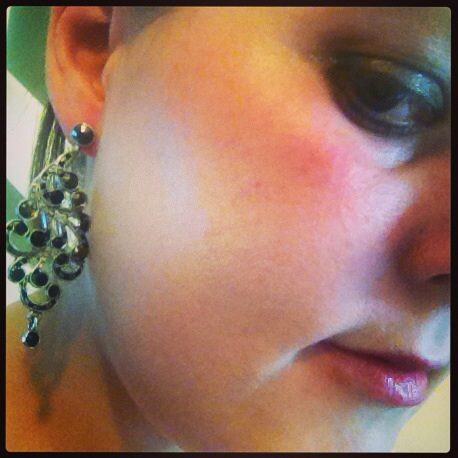 A lovely driver called Paul pulled up outside my house at the arranged time and drove me to the Henley festival, where I met up with Pippa and Helen and the lovely @Claire who arranged all this for me, and we headed into the festival ground and to the BWM floating bar. 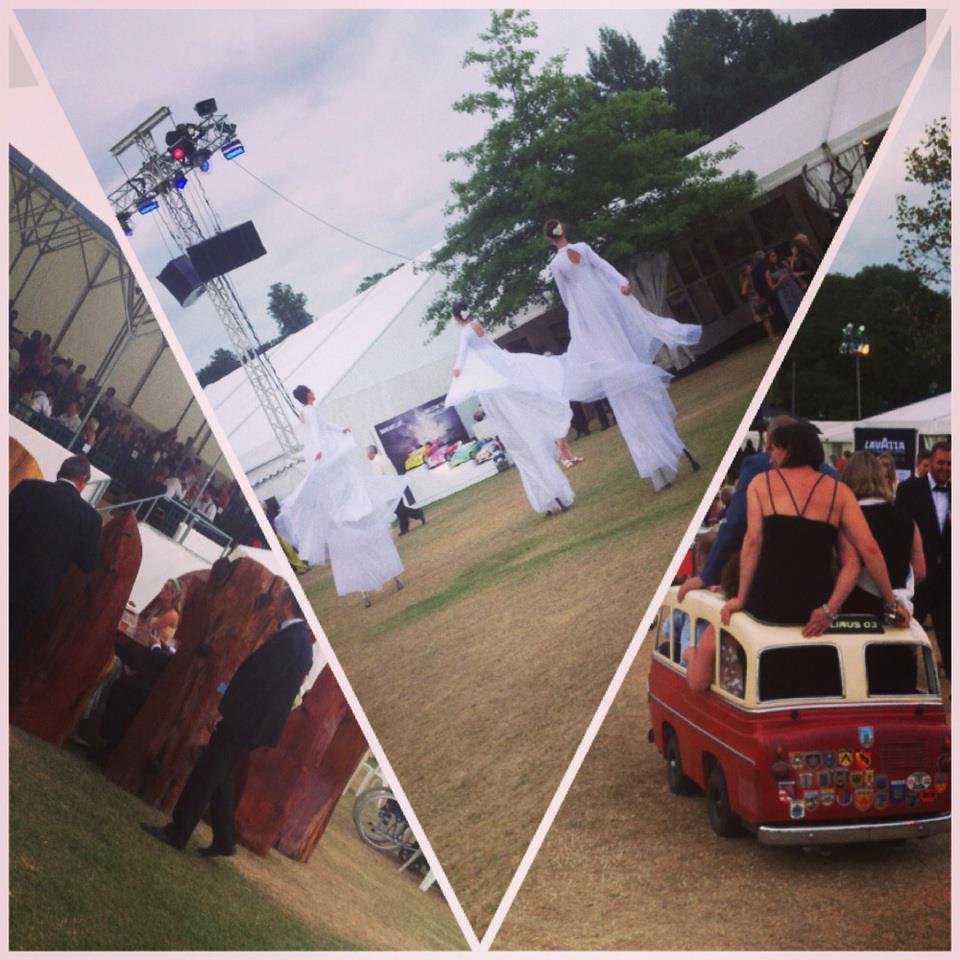 We were soon whisked off to a delicious three course dinner on the property, passing by random performances and art instillations and all sorts, really well worth visiting, with an incredible atmosphere. After one of the most photographed dinners in history, I’m sure (every course was met with paparazzi-like photo frenzy – mine included!) we rushed over to the stage to watch Paloma Faith perform 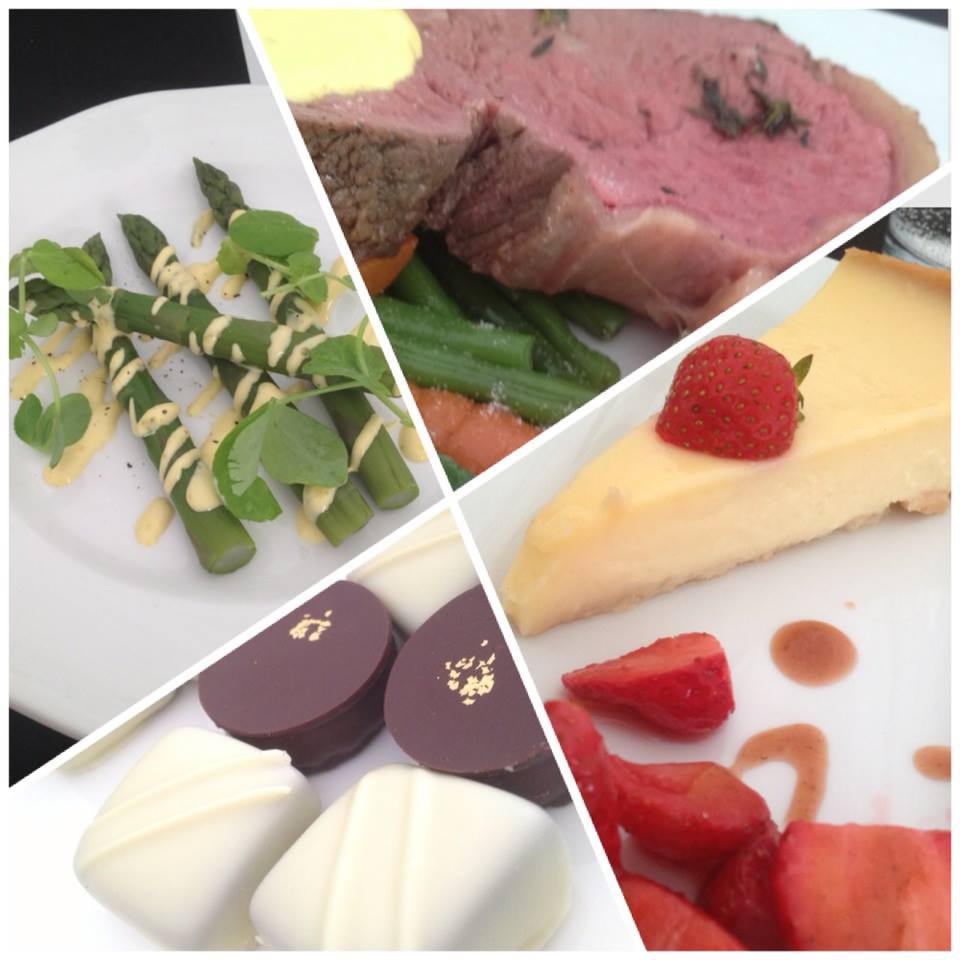 I have to say that I have never heard of her before, but I absolutely loved it! The show was fabulous, she was so gracious towards her band, and she had a great sense of humour, despite her songs being generally about heart break and sadness. I really loved the show and intend to buy her new CD – and probably the current one too. It’s great. 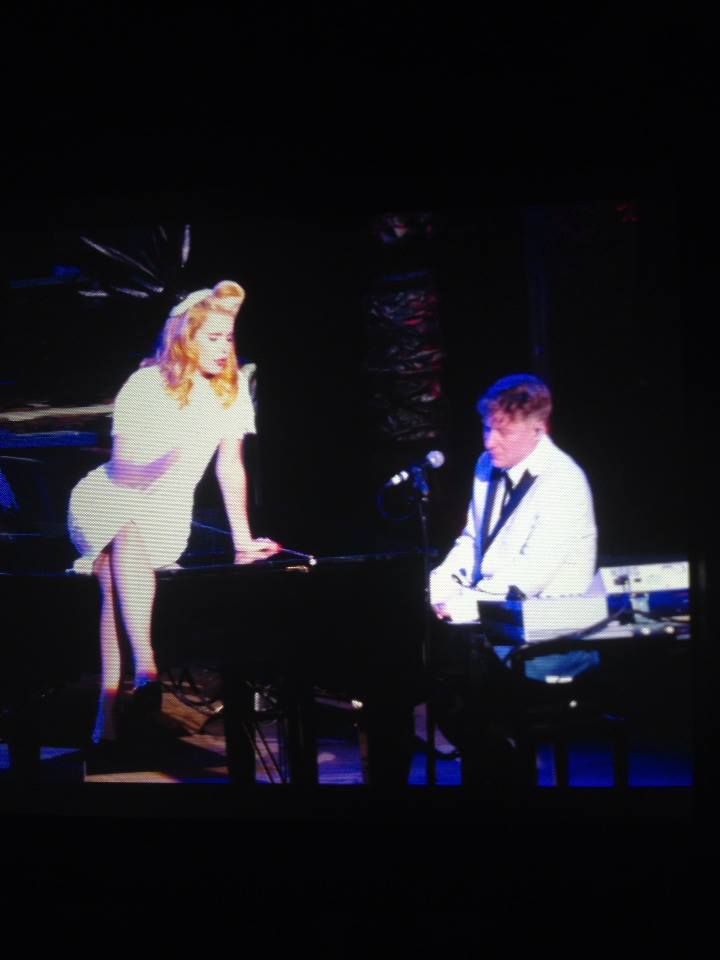 While everything was wonderful, and I was feeling totally spoiled, I couldn’t wait for it all to end… so I could get behind the wheel of the BMW! As I switched the car on – by pushbutton, hello 21st century! – the sultry sounds of Paloma met my ears again. Nice touch, BMW, putting her on the playlist. 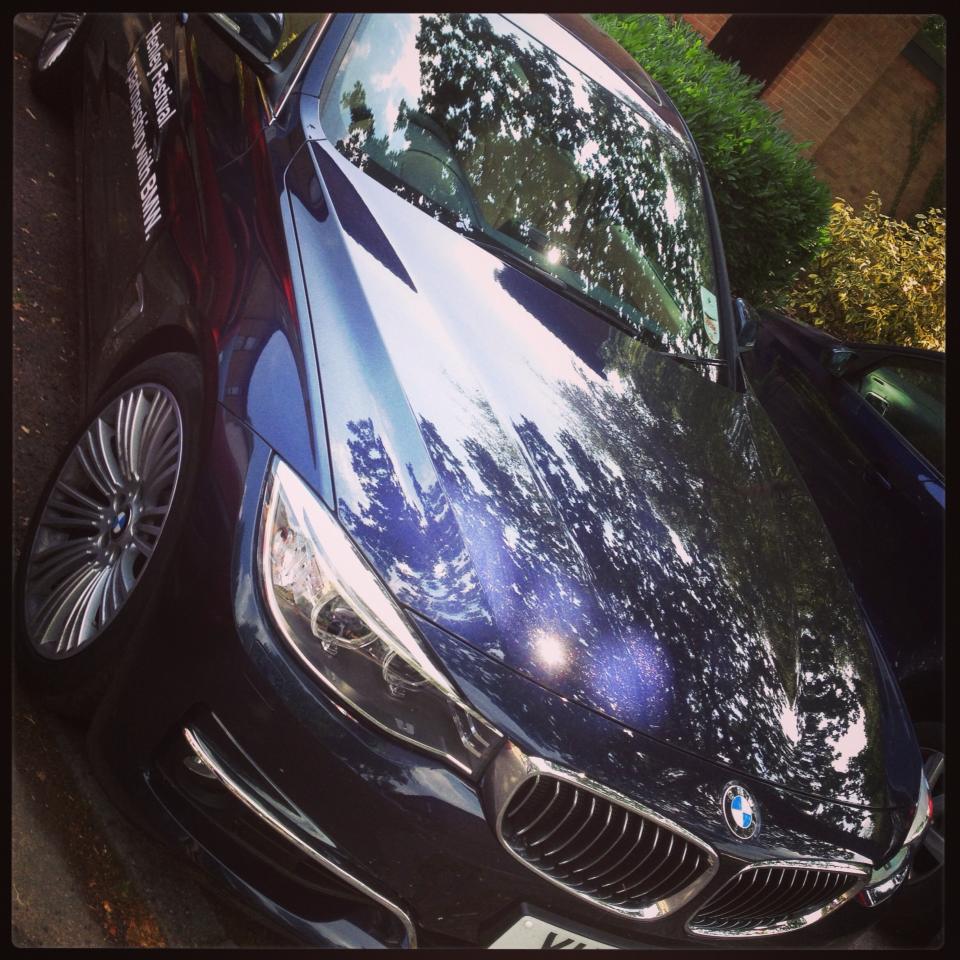 Now, to ‘review’ a £34K-odd car is no easy feat, and it’s not really what this blog is about, so I’m not going to go into the technical specifications, but I want to share some of the stuff I really loved.

I loved the car seat adapters built into the seat for car seats for kids. 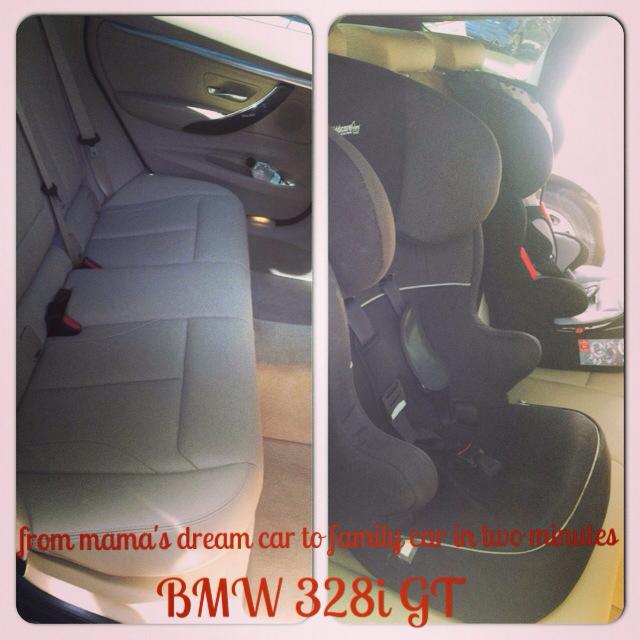 I loved the extra 7cm of space in the back seat. It was awesome, and great for extended rear facing carseats too. 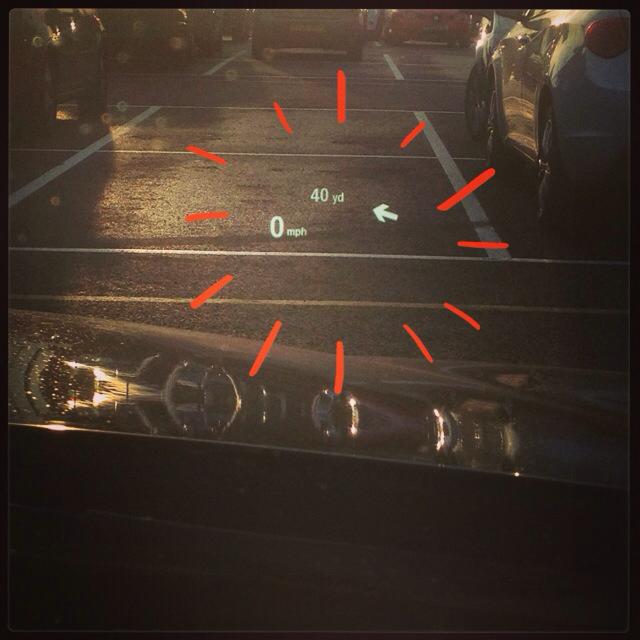 There’s a built in GPS which is kind of in the center and takes your eyes off the road, but there’s this super awesome holographic type reflection just below the driver’s line of sight that gives you basic directions and your current speed. I LOVED this.

The kids adored the sun roof, and I took requests on open, closed, open visor but closed roof, or closed roof and visor at the start of each journey. 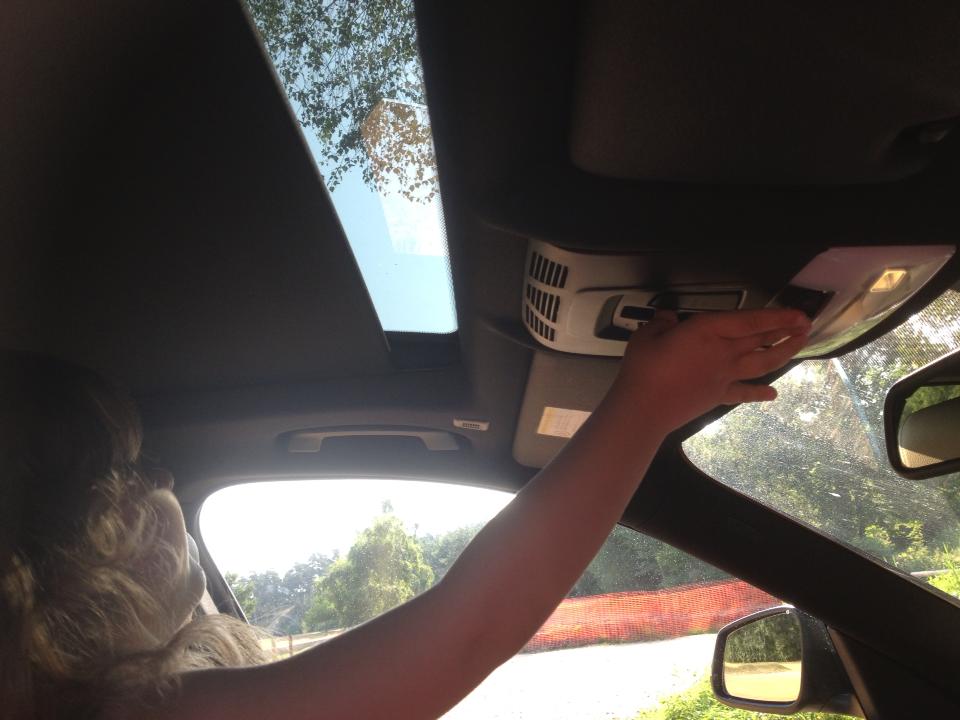 There is so much space in the boot of this car. I really wish we could have taken it camping next weekend – I’m sure our tent would easily lie flat in the boot. It’s massive. I didn’t think we’d get our smart trike in there, but we did, along with everything we needed for our day out. I was very surprised.

I told my husband driving this BMW 328i GT is like driving pouring cream. It is so smooth – even Ameli said so, although she said it was ‘soft’.

As for fuel economy, I was really impressed too. I decided to take the girls for a day out to Southampton, and the dial dropped by only 12 miles in what was nearer to a 50 ml journey. Of course once we were back in city driving it quickly dropped again, but I think there are different fuel economy options on the Grand Turismo, but I never got as far as figuring it all out. I know the ECO Pro mode can help you reduce fuel consumption by 20%, which is quite huge.

As far as a family car goes, the BMW 328i GT is amazing. It’s beautiful, it looks good, and it has so many little awesome features that actually make me giggle with glee as I discover them: the lit up door handles, the push button boot opening and closing mechanism, the way you can make the playlist appear in the reflection on the windscreen.

It is luxury, and it is family, and everything feels so safe, and secure. Even going around corners, the car feels so incredibly solid on the ground. I’m just in love.

As all good things do, our time with the beautiful car (with the working aircon!) came to an end, and I removed the car seats, poor Ameli cried! She wanted to keep it as much as I did. Thanks BMW. We wish we could have kept it longer, but loved every moment of our BMWHenly driving experience.