For this week’s field trip, I took the girls to Hobbledown Farm in Epsom, Surrey. It is an animal farm, a playground, an indoor play place, and a generally ‘mysterical’ experience.

Hobbledown Farm have just celebrated their first birthday, having previously had a different name, and I assume different owners, and if you read the reviews on Google and Trip Advisor, you might decide not to go. I almost did. Having arranged with friends though, we went, and we had a really good time, and would definitely go again.

Just inside they have 18 lockers that are free to use with a £1 coin – which you get back at the end of the day – so that you can get into the lockers as much as you need. This was a godsend. I put all our lunch and a four litre frozen juice and water mix into the locker, and kept filling up our water bottles from it during the day, so that we had cool refreshment all day, without having to carry it around with us. The locker area is between the farm and playgrounds on the left and the toilets, sand pit and indoor play, shop and cafe on the right, so you pass it quite often during the day too. 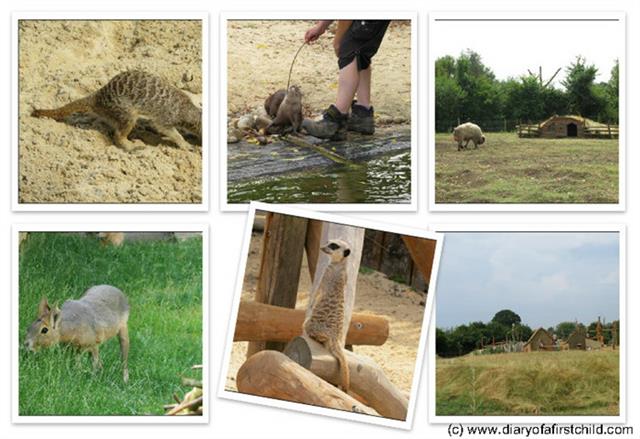 The farm animals are both local and ‘exotic’. There are sheep, ponies, peacocks, pigs, chickens, but there are also llama’s, ostriches, meerkats, and otters. Depending on the time of day and possibly the time of year, there are regular animal feedings during the day too, and you’ll receive a notice with the times for that at the door. Those are quite nice for adding a little education to the day. 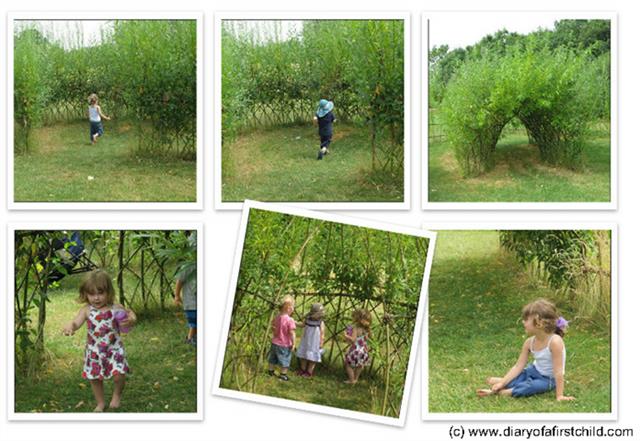 Beyond the animals you’ll find the ‘Field of Confusion’, a willow maze, which is removed from the busy areas, and an ideal spot for a quiet picnic or snack, or more importantly, inside the maze are little willow ‘houses’ which the children loved. These are just perfect little chill-0ut zones when little ones need a little place to come back down off their excitement.

Aside from the animals and maze, there are five play areas: 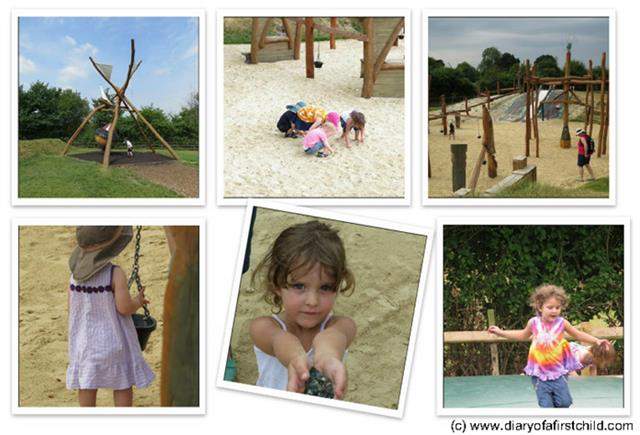 The Crystallite Mine is the play area for the under 5’s, mainly, and plays on the theme of the Hobbledown Village being, I guess, a mining town? The Crystallite Mine has a slide, a climbing area, and a network of pulley buckets which the little ones absolutely loved. There is also a non-threatening network of underground tunnels, leading to the ‘bunker’ area with ‘crystallite’ built into it to let light in. It’s very pretty.

The absolute grabber for the little ones though, is that they actually ‘mine’ for crystallite – polished glass – and if they pick up (very roughly) an ounce worth, they can collect a lollipop in return at the shop. They l.o.v.e.d this. It was a very popular activity. This section also had a house-swing that you could sit inside and literally swing the whole hut, as well as two huge bouncing pillows – again an awesome activity.

Hobbledown Village is an absolutely awesome play area, for children 5+ although I had a hard time keeping my 3 year old out. They have wire walkways and tunnels and towers. It really is quite awesome. Attached to this are the highwires, which really are for older children, over 130cm and which are a staffed attraction. 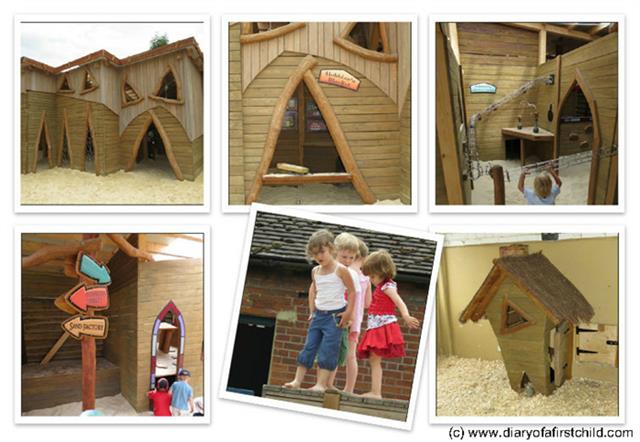 Back on the other side of the park, past the entrance and the lockers, you’ll find Hobbledown Market, a whole play area with different market themed rooms, all resting on a sand pit, with skew rooms to climb through, sand toys built in, a pulley-system, a ball-run, and weights for weighing your ‘purchases’ (sand, I assume). It’s really brilliant and almost impossible to get the children out of!

The indoor play barn, The Hobblings, is probably the best soft play I’ve ever been to. There’s a light up ‘dance floor’ where the children were playing dodge-ball, although the small kids were chasing the ball, much to the frustration of the bigger children, but hey-ho.

The sensory corner is pretty small, but still engaging and the little ones liked watching the lights. There are two sections to this indoor play barn, one huge and maze-like for the older crowd and one more low-key, but like a super duper playhouse, with different sections, like a doctors room, market and other bits. Up the top of that there are ships cannons with soft ball targets across the room. It’s all really well thought out, and well executed. It’s really good. 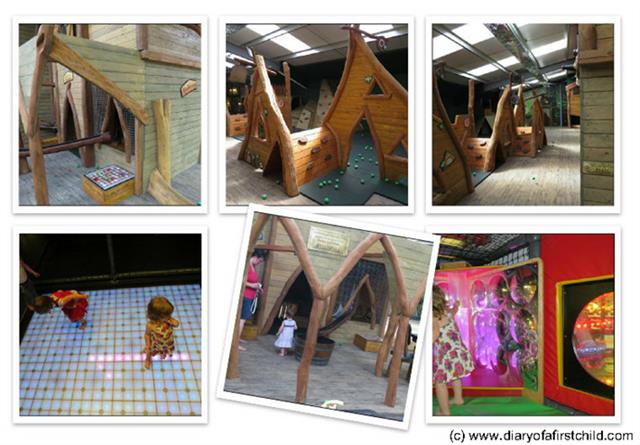 There’s a cafe in the playbarn, with good selections of food at really reasonable prices. They have the standard ‘fish finger’ type children’s foods that we’ve mercifully managed to avoid, but also healthy ‘real food’ options, and if I recall correctly, children’s meals were around £3, which is not bad at all.

You are able to take your own food in to Hobbledown, but not into the barn, which is fair enough. They also provided water free of charge, which was excellent as it was a crazy hot day that we were there. 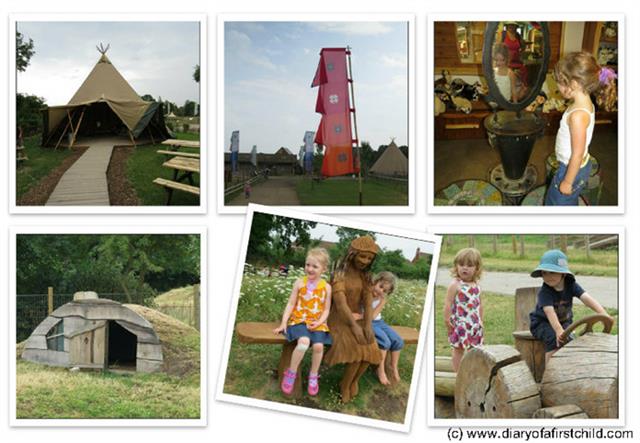 The lockers meant we didn’t have to spend any extra money once we were in, although we did buy ice creams. If we weren’t able to take our own snacks in, we would not have been able to afford to go, quite frankly.

There are loads of little ‘bits’ around the place that add to the atmosphere, and the magic. Things like the hobit-hole like chicken coops and sheep pens, or the lopsided animal shelters. It was all just very well done.

There are taps littered around the place for washing hands – these contain warm (sometimes HOT) water. Yay.

Not much, really. Just watching the video on the website you get the impression that there are ‘characters’ walking around through the day. Perhaps there are on event days, but there weren’t while we were there.

The only thing that annoyed me was that the price for an adult was slightly lower (£11.50) than for a child (£12.50). An adult can’t go on their own, and you wouldn’t go without your child. I understand that this prevents one under 2 (free) coming with 15 grandparents (£7.50) and aunts and uncles, but in reality, at least one adult should be able to go for free with each paying child, because seriously, fun as it was, we don’t go to these places for me. (You can more than six months in advance, and will receive discounts of up to 15% for doing so, up to one week ahead with a 5% discount.)

Overall though, we loved it, and would definitely go again, and if an annual pass for me wasn’t almost the same price as one for Ameli, being only about 40 minutes from home, I’d even consider buying one. I recommend it to friends, and will be taking my parents too, when they visit!

*This was NOT a sponsored visit. We bought our tickets and spent the day with friends, just like anyone else. 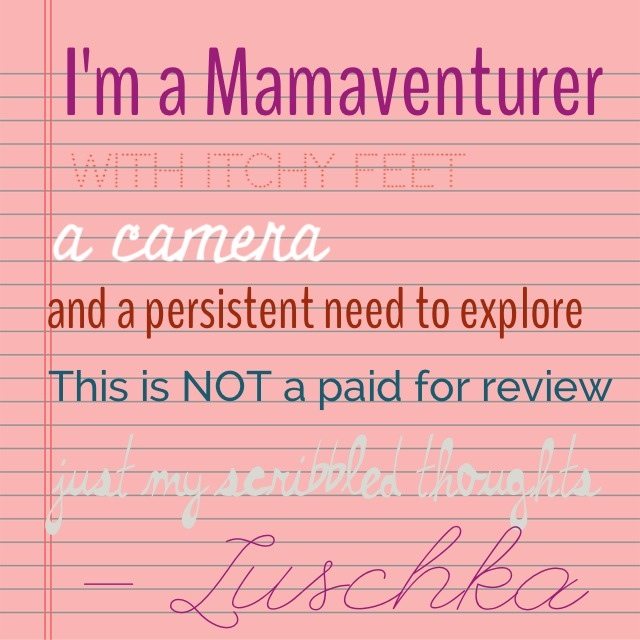 A Day At Legoland Windsor Duplo Valley
The Tiger Who Came To Tea Live In London
Day Trip To Thomas Land, Drayton Manor
A Day Out In Birmingham, Midlands