If the thought of the bear going over the mountain to see what he could see, or the five little ducks that left mama duck to go over the hills and far away sends you into a bit of a funk, this is for you. If you think Mary and her little lamb should follow Old King Cole and the Duke of York’s men up the hill and ring-a-ring-a-rosie themselves right down the Pied Piper’s hole along with Yankee Doodle and that woman from Banbury Cross, then you’ll want to read this.*

Brain-child of Alan Glass, Ed Jordan â€“ with three daughters between them – and Paul Choritz, Beautiful creatures is a South African inspiration envisioned when Glass found himself being driven steadily insane by rehashed children’s music. With full adult-style musical instruments and equipment like the ones at Bring in the Noise, and decent lyrics there are no annoying one-line repetitions (the pelican’s beak holds more than his belly can, anyone?) 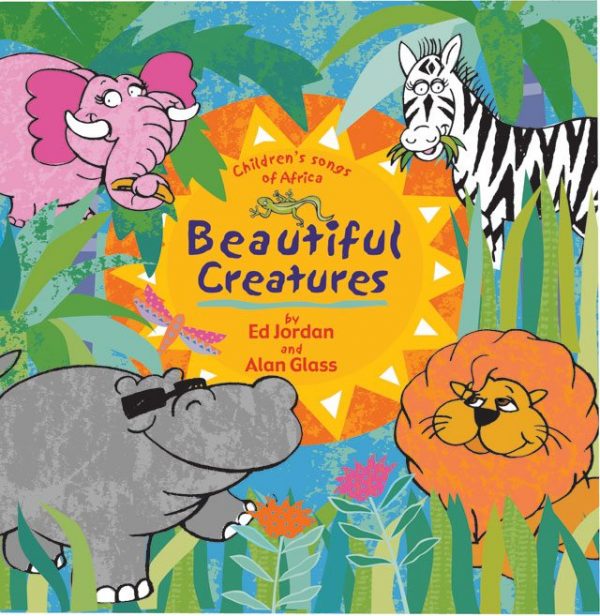 The African influence stretches from the music and lyrics to choral language used, from upbeat energetic tracks through to the final four lullaby songs. Perfect for the bath to bed routine – although they do have a whole bed time routine album too â€“ the music traverses the wild plains of Africa, introducing children to a wide variety of animals.

From Lorenzo the Luckiest Lizzard, who should be left in peace in the bush or at home, through to Imvubu the Happiest Hippo, who should be avoided because he can be quite dangerous, and Lucas the Lazy Lion who roars when he wants to be heard, children are taken on a fantastic journey of discovery.

Rather than simply being nursery rhymes, most of the songs carry an educational message too, and some of them focus on being conscious about the environment. The song Beautiful Creatures is about joining together to protect the world for our futures, and the Night Song is about appreciating the beautiful sounds of crickets and other insects at night.

According to Choritz, they â€œbelieve that children must not be spoken down to, hence the use of vocabulary that will stretch and stimulate young children. We try and ensure that our songs will entertain children while educating them in a subtle way.â€

Loving the CD as we do, I asked Paul Choritz what else they have lined up for the future. Currently they are putting together a stage show at the South African theatre that hosted the Lion King as well as working on a TV series based on their songs.

As an South African ex-pat mother myself, I love having the music of my home country fill my new home, sharing not only our heritage, but a great message with my daughter. With seven CDs ranging from animal songs through to songs about sibling rivalry, dealing with anger, emotional development and conservation issues, the music is versatile enough to be relevant to children regardless of their country or background, with themes that can be applied to everyone, everywhere.

You can buy this CD and the rest of the collection from their website, or on iTunes. I also have three Beautiful Creatures MP3 albums to give away. To stand a chance to win, head over to their website then leave the name one of their other CDs or songs below. You can also ‘like’ Beautiful Creatures on Facebook to be kept up to date with future developments and fan news. I will randomly draw 3 winners at noon GMT on 21 June 2010. As the CD is delivered by MP3 download, the competition is open to anyone anywhere!

*For the record, I love the old nursery rhymes and feel that they still hold much value and importance in our lives today. I am happy that they are being revived in our nursery rhyme times, libraries and play groups â€“ ‘adult friendly’ music just provides a break from time to time!

And the winners are: