Possibly my favourite thing about baby led weaning has to be the fact that the essentials don’t really extend further than the food itself. In other words, there is no need to rush out and buy yet another pile of ‘stuff’ to add to the baby-related clutter already in your home.

Of course, there are a few valuable extras that can make the process simpler, and while they may not be essential, they’re certainly recommendable. Here are a few examples that have helped us out with our daughter:

Why do I put this first on the list? Well, because we were getting by just fine without one for the first few months until we realised that our daughter was never actually sitting down and eating. Instead, she was grabbing a handful of whatever was within range while crawling around the living room, half eating and half mushing food in to the floorboards. A 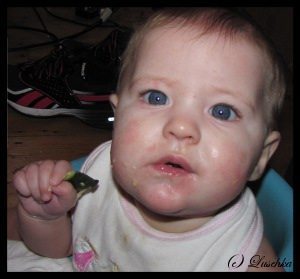 high chair, in my opinion, helps to define eating time as eating time.

That said, though, we used a Bumbo seat on a purpose-bought changing mat for a while and that was at least a bit easier to clean than using nothing at all.

Also, on a recent camping trip we put down the mat and put our food on it, letting her crawl around on the grass â€“ no clean-up required.

For the first few months, certainly, these don’t really belong anywhere on an essentials list. The easiest thing for you will be to put bits of food on the high chair tray or similar, and let baby pick it up and go from there. In our case, putting food on a bowl or plate invariable means the bowl is tipped over so that all the food lands all over and it (the bowl) is then chewed on. You can buy suction cups to attach bowls to the table, but I never felt that to be all that important. It’s far easier for Ameli to see the food, pick it up and figure it out when it’s not in a bowl.

Before we realised this, however, we bought two beautiful bamboo bowls from Bambu. Made with safe materials and decorated with safe paints, they are beautiful, sturdy and should be around for many years.

We also bought a set of two forks and two spoons from Bambu made beautifully from smooth, soft bamboo. They are perfectly baby sized and gentle on those growing teeth.

Of course it was only later that we realised she wouldn’t be able to actually use it successfully for a while, although she does just about manage to get it to her mouth, but normally without any food still on it.

As Ameli has started drinking less and less milk during the day, I have been conscious of her hydration, especially on hot days. As a result I’ve had to introduce water to her diet, which has been difficult as she doesn’t take to a bottle particularly well. Initially, at a loss as to how to get water in to her I filled a straw and transferred little amounts in to her mouth, an effective but less than ideal solution.

I then acquired a Doidy cup , but found that just as with the bowl, the cup soon found itself empty of contents and became a chew toy. It has taken a few trial runs, but she has finally got the hang of it and although a vast majority of the water does find its way on to her clothing, she is taking in enough water.

Obviously I can’t always have her wet and practising though, so we also use the Baby Born Free sippy cups. They come with two different spouts adaptable to your child’s ability and are quite free flow. These are ideal for when we’re out and about.

Out and about I use Jackson Reece Herbal wipes as they contain none of the ‘bad stuff’ and Ameli actually allows me to wash her face with them. At home however, a quick warmed facecloth is a good way to clean her.

Anyone who has ever done a day of BLW will tell you about the mess. There’s no avoiding it. But I’m told that it gets better. I guess this one depends on how sensitive you are to mess, and how attached you are to your baby’s clothes. There are some great bibs about though. I’ve seen some that cover the length of the baby’s body, some wider than the baby, some with arms and even full body bibs, legs and all. I quite like the idea of bibs with a catchment area, although we don’t actually have any of those.

Aside from these five useful aids that should improve your chances of stress-free baby led weaning, the most important thing you’ll need is simply patience. Be prepared for meals to sometimes take more than half an hour, and for the majority of the food to go everywhere but in your child’s mouth. But always remember that while you may have been practising this eating business at least three times a day for many years, to them it’s all completely new and yet another skill to be developed. In the end, though, isn’t that the whole point?

So, is there anything else that you can think of that makes baby led weaning a little easier in your home? Or have you been considering BLW and have questions to ask? Leave your comments below!