When Ameli was two days old, I was asked if I’d have another child. Unequivocally, I said yes. I was on such an oxytocin high from my home water birth, I was capable of anything. And besides, my newborn had been asleep most of her life. And I had people around to help with food preparation, house cleaning, and my husband was off work to help with the baby.

Two weeks later, of course, my parents left, and my husband returned to work. And my daughter stopped sleeping so much. And the oxytocin wore off, only replenishing when I breastfed.

Here we are, almost 14 months later, and I’ve had the, â€œso when is number two coming alongâ€ question so many times, I’ve lost count. My husband has even commented a few times now that another little one would be nice. A playmate for Ameli would be nice. Little comments like that. 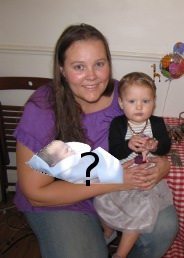 I’ve had people deliver opinions varying from waiting till Ameli goes to school, to asking why I didn’t try again immediately.

The thing is this: I don’t know.

I know in my heart that I would love another child. I know in my head that I would prefer a small age difference in the hope that they can grow up and be friends like my sister and I are. I know for certain I would love to labour and give birth again. But I also know that I am rather terrified of pregnancy. Being as ill as I was last time would be horrific, especially with an enthusiastic and energetic one year old to care for.

Then there’s the one year old. For 13 months, she’s been the center of my world, of her daddy’s world, her aunty’s world and that of the rest of the family. If there’s another one, would that dilute the love and attention Ameli receives? Would it change the way I feel about her?

Obviously it would halve my time with her. How will she cope? What affect would it have on her long term?

There are so many questions I find myself asking.

Yes, some will say it’s not fair to a child to have no siblings, which I agree with, but then I think about the life I can give Ameli, versus the life we could give two children. With one child, we can be transient, we can go where the wind blows us, we can give her the best education, send her to university if she wants, do anything for her.

If there are two, things change. Isn’t it unfair to Ameli to practically take these opportunities out of her hands?

So many questions, and so afraid of making the wrong choices, because these have life long consequences.

Does anyone have any advice for me? Different insights and things I’ve not thought about?