When my daughter was born I went in to the office with her at two days, and went out and about from there on. I went to moms groups and baby groups and everything, and we even went away for the weekend when she was 5 days (with her, obviously!) and again at 11 days for a weekend (also with her!)

People were constantly asking me how I was so relaxed for a first time mother, and with a few pregnant friends now, I’ve been thinking about it a lot. This isn’t advice, or a how to guide â€“ it’s just a very brief summary of what we did and didn’t do, and how it worked for us. I guess you could call it my first year recommendations, from the lofty heights (!!!) of having been at this for fourteen months now!

We never had a routine. We still don’t. I accept that it works for some people, but it never has for me. The most important thing I did for us was to bin every ‘parenting’ book that I was given. I had zero experience of babies until the day Ameli was born, but I learnt pretty fast! And then I just went with it. I did everything in my power to follow my instinct, follow my gut and follow my baby. I let her decide her sleeping and feeding patterns, fed her when she was hungry, let her sleep when she needed to sleep and we were both always really relaxed.

As time went on, we’ve been firmer on nap times and bed times though! We have a bed and bath time routine that we loosely stick to, but it makes up a very small part of the day. 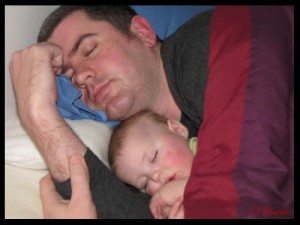 We co-sleep and have since birth, so I had plenty of sleep in the early months, and we breastfed so there was no preparing bottles and sterilising and midnight kettle boiling and so on. (I did express sometimes so that my husband could feed her from eight to twelve giving me six solid hours till she needed me again around two – it’s amazing how big a difference those six hours can make!)

When Ameli had colic, we put her to sleep on her tummy and that got all the gas out and the colic went away, and she learnt to self burp that way too, so apart from the first few weeks I never sat burping a baby for ages everyday.

When she developed eczema from bath products we switched to natural essential oils and when she reacted to the chemicals in disposable nappies, we switched to reuseables, which we now love and prefer.

We didn’t use a pushchair for the first ten months, choosing instead to carry her in a sling while we were out. She was comfortable, close and could feel my heartbeat (or her daddy’s) and never cried. People would comment on what a content baby she is. It also helped massage out all the colic, wind and all those other things that keep babies crying for hours. 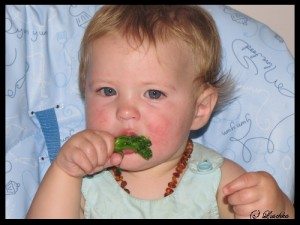 Then at six months we started introducing solids. I never pureed a thing. I also didn’t buy pureed foods. We practiced baby led weaning and since the beginning, she’s eaten what we have, and she’s fed herself. Since she’s still breastfeeding a lot of her nutrition comes from that and food has been more of an exploration of textures and flavours than about full on nutrition. That changed after her first birthday and she’s been eating more solids, but still breastfeeds whenever she wants.

I spoke to a friend recently who complained that she seems to spend most of her day either sterilising bottles or cooking baby foods for her ten month old. I actually felt sorry for her. That would have driven me insane.

I certainly don’t have it all together all the time. I have more nights of interrupted sleep than not, and I have bad/rough days too, but this too shall pass. My best advice is to ditch the ‘experts’ â€“ you are an expert on your child, and if you’re not, you will soon be. Relax, and enjoy them and learn to ‘read’ them and ‘communicate’ with them.

Cut sugar and the bad e-numbers in sweets and medicinesout of their lives, have more material and wooden toys than plastic and switch off the television and radio so that they have time to process the world a bit more. You don’t need the latest gadgets, you don’t need all the ‘stuff’ and you don’t need to worry about the little things. That way, you should all be calmer, happier and have it all a little more ‘together’ .

Or at least, that’s what’s worked for us and is what we’ll aim for again, should there be a next time.

Any other words of wisdom from your early years as a parent?

Disney Bedtime Magic – Get A Disney Character To Phone Your Child
Letter To A One Year Old
Letter To Squidgy – 42 Weeks And 4 Days: The Start Of A Birth Story
Your Mission, Should You Choose To Help Us Out!