We’ve had such an unbelievably relaxed week – thereÂ  have been no agendas, no to do lists and no rushing around. We’ve built a puzzle, played board games, lain by the pool. It’s been a strange kind of blissful.

I love this series of pictures. Ameli toddled off away, trying to flee us, but her attention was grabbed by this little stream of water. She sat grabbing at it, then pondered, looked over at me and finally, bent down and drank. It was so very cute to behold!

A couple of wild ostraches broke the fence and made their way to the chalets. They’re quite viscious, especially during mating season – when their shins go red – so we stayed put and watched them until they finally left.

I took this as my sister and brotherÂ  came walking up the hill with Ameli and my dad watching and waiting for them. It felt so ‘normal’, like a ‘normal’ family who see each other regularly and don’t inhabit four continents between the five of them. I wanted to remember the moment where life felt ‘normal’. 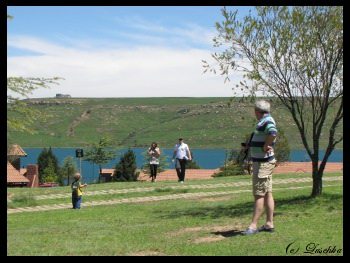 The pool staff gave Ameli a sucker and she tucked into it like a pro. You’d think she regularly receives them – which she doesn’t. It was a sticky mess, but she loved it. 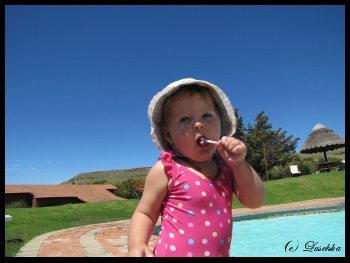 Staying in the mountains you’re bound to have drastic weather changes from time to time. Ameli and I climbed the mountain (you can just see the resort in the background of the main image). It was lovely but cold. Her poor nose went all red. The flowers were just there, on the path, and I thought they were pretty. The middle picture is of my sister and brother. We sat down to lunch in the sunshine and moments later that was the sky behind us.Â  From the top of the mountain, there’s the resort and the dam covered in mist. 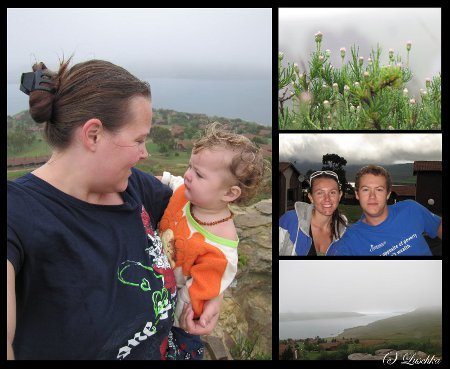 A sunny day again, so we went out on a barge cruise. It was beautiful. The water there is a fantastic aquamarine colour unlike I’m used to seeing in South Africa – it’s usually reserved for Alpine dams and rivers, but for the same reason: the water flows from high mountain springs, pooling here unpolluted before feeding the rivers of two different provinces. 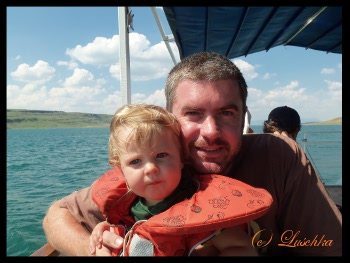 Not something I see every day: my brother, father and husband lounging in the sun. 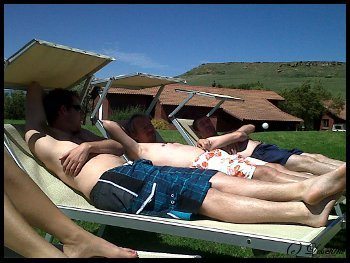 Thanks for joining us once again for our week in pictures!