What does an AP parent, who doesn’t like a pushchair, and has a child that hates it, do when out and about? Of course, baby wearing is one option â€“ definitely the best choice we made when Ameli was born, for both colic and for the calmest baby I could have asked for. But, now I have a 19-month old who weighs almost 12kg and where I could carry Â her for up to six hours up to a few months ago, she isn’t so keen on that anymore either â€“ she likes to be able to walk, until she’s had enough, and in and out of the sling every five minutes is very fiddly. So, when we were offered a Smart Trike Recliner to try out, I thought, why not.

And to be honest, I didn’t want to like it and had my suspicions that Ameli would react to it the same way she does to everything else that requires her to be strapped in â€“ with a howl.

The box arrived and the Smart Trike Recliner required assembly, which was quite a process. It took about forty minutes and while the instructions for assembly are pretty good, I found the usage instructions to be a bit harder â€“ it’s hard to demonstrate â€œplace fingers here and pull on both sides simultaneously while pushing the seat forwardâ€ in one image, really.

None the less, we assembled the Smart Trike and Ameli plonked herself down in the seat before it was even fully put together. Once assembled we took it for a ride around the neighbourhood and Ameli adores is. I did strap her in, but as I expected, that didn’t sit well and she squirmed out of the arm straps, but I’m not too worried as she’s snugly in the seat and the handlebars provide some protection. For younger children it also comes with a firm bar that holds them in place along with the saftey harness.

While the sun visor is highly recommendable, especially for younger babies and in the summer, I had to take it off as I don’t like not being able to see Ameli, and more importantly, she squirms around and pulls at it because she can’t see me.

There are three different foot rest options, which is really great. One ofÂ  them is the pedals for the â€œbishishelâ€ as Ameli calls it â€“ that’s bicycle, if you don’t speak Ameli â€“ which she’s still a little small for, so there are two other foot rest options, depending on the position of the seat.Â  The Smart Trike is easy to steer single-handed using the parent handle, although the child is able to control steering from the handlebars, so in crowded places two handed steering is advisable, otherwise you end up going all over the place.

There are various seating positions, so a child can recline, which I found useful when Ameli fell asleep whilst out shopping â€“ just pop the seat back (once I’d figured out that whole ‘place fingers here and pull’ thing) and had one times happy toddler.Â  And when she did wake, and did insist on being carried, I could steer the Smart Trike Recliner with one hand, and put the shopping basket on the seat.Â  It does come with a â€˜basket’ but this is the weakest point of the Smart Trike in my view, as it takes no weight atÂ  all and pops off really easily.

Overall, however, we love the Smart Trike Recliner, and since the handle is retractable, at its lowest setting (for storage and it can remove entirely for tricycle use) Ameli can push her baby (an oversized Eeyore) around on it too. Â Speaking of storage, it is bicycle sized, so does take up a bit of space, but nowhere near as much as some pushchairs, and it fills only half the backseat of our Zaphira, making it really easy to take on shopping trips and so on (dependent on how many car seats you have in the back, I guess!) 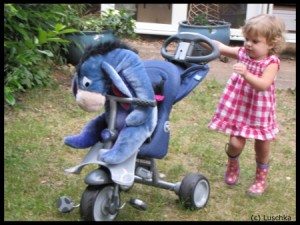 There’s a little bag attached to the parent handle, big enough for a couple of nappies and some wet wipes, my phone and wallet, which is great as there’s no need to take additional bags with when you’re going for a walk, and there’s also a cupholder, perfectly sized for a bottle of water, or a standard take-away coffee size.

So, from an AP perspective, as someone who never got on with a pushchair for daily use, I really like the SmartTrike. It gives me an opportunity to have my hands free, it’s easy to manoeuvre, Ameli can sleep in it if she wishes, and it is a fantastic starter bicycle with back support. I also like that you can use it from around 6 months to over three years, so there’s no need to constantly be buying top-ups. I don’t have to take it, and as sling or hipseat or anything else â€“ it’s a minimalistic way to go for a walk along the canal, and Ameli likes her â€œbishishleâ€, so I do too.Â  The Smart Trike is also classed as a stroller and is fully stroller-certified, so can be used instead of one from six months of age – the only of it’s type in the world. 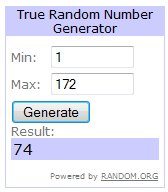 Smart Trike are offering Diary of a First Child readers an opportunity to win a SmartTrike of your own. Â To be in with a chance to win, tell us how you would use the Smart Trike this summer? Walks along the canal? For icecream expeditions on the highstreet? Or perhaps for early morning strolls along the beach?Â  We’d like to know how the Smart Trike Recliner would fit into your summer.

The competition closes on June 13th at noon GMT, is open to UK addresses only, and a winner will be chosen at random using Random.org.

The winner is Emma L Clarke – thanks everyone for entering! I wish we had 100 to give away!


You do not have to tweet or share this competition to enter, but doing so helps ensure that I can keep bringing you giveaways! You can subscribe to Diary of a First Child by RSS or email. You can also follow us on Facebook or on Twitter. We hope to see you back again soon!

Please take a moment to VOTE for us in the Inspirational Blogger category for the MADS Awards. It only takes a moment, and you can only vote once. Voting closes on 24 June. Thanks so much if you do!