Have I got news for you.


If you can’t watch it for some reason, here’s the transcript: 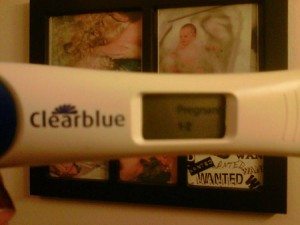 Or, as my colleague Tamsin announced to the Twitterverse recently:

Remember recently when I wrote about why I don’t ‘get’ waiting for 13 weeks before sharing the great news? Well, this is money where your mouth is time.

I’m pregnant. I’m probably only around 3-4 weeks, (which has caused at least two people to roll their eyes and be rather patronising, as if it’s not a real pregnancy yet) but hey ho, to each their own. I remember seeing Ameli on the screen when I was three weeks pregnant. It may just be a mass of cells, but it’s my mass of cells, growing in me.

My pregnancy with Ameli started much the same as this one, with a missed period, spotting, bleeding, and then nausea and tiredness.  It was the spotting that led me to taking the test in the first place. And I’ve been pretty exhausted the last few days too. But really it was the spotting and the UTI. I spent the third to the 20th week of my last pregnancy terrified that I was losing my baby due to the constant bleeding.

In some ways, that is a relief to me now. I feel more confident that it’ll be okay. I also feel that now, if I lose this baby, I’ll feel silly for telling people. It’s so easy to see why women are left with the feelings they have after a miscarriage. Like it’s something you’ve done wrong. Or something you just weren’t good enough, fit enough, healthy enough, and so on to do.

My thoughts so far have largely been around the state of homebirth in our new area. I have no idea what it’s like here. I might have to start looking into private midwives.  After my last beautiful birth, I know there’s no way I could go for a hospital birth if I didn’t have to – especially since in one month of living here, I’ve had two mothers tell me about their terrible experiences at our local hospital.

So, fingers crossed, this will be like Ameli. A bleed for some time, but a beautiful bouncing baby after.  Tired and nausea pass. But hopefully, this’ll be my child forever.

It’s early days yet, but celebrate this life with me.