We’re at week 9 now, but actually week 11, but until I have a scan and can check your size, it’s a bit of a guess both ways, to be honest, so who knows.

We’ve had a much better week, because I’ve taken a tablet every morning, and as a result been able to eat. I feel terrible about taking them, and still feel nauseous most of the day, but at least not sick, and able to be a halfway decent mommy to your sister, and travel companion. 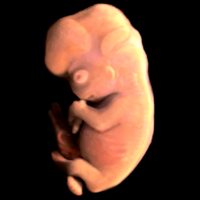 We spent the week with Oupa and Nana at Crystal Springs which was very quiet and relaxing. They tend to be asleep by 8pm, which kills me, but at least it means I’m getting a lot of rest and seeing a lot of sun rises.

We’ve also travelled to Mozambique through Swaziland, which has been pretty amazing.

It’s been an odd time, really. With Ameli I’d had 3 scans by this stage, since I was so sick and bleeding, yet with you I don’t even have a scan booked or planned for 12 weeks, (the nuchal fold scan) since I am in what is essentially deepest darkest Africa.Â  I’ll have blood tests and maybe a scan at 16 weeks, but we’ll see.

So while I know that you’re there, and I wonder about you, and worry about your development and stuff like that, I don’t have a picture of you in my head yet, and I haven’t started building a picture of your personality yet.

I understand all the counter arguments for not having scans, and all the advice against it, but I must say, I’m missing it and can’t wait till I start feeling you move, so I know you’re alright.

At the moment I’m in that really awkward in between phase where no one would assume I was pregnant, but I certainly look fat. It’s funny that I should feel self-conscious about it, since when I looked like this from being overweight, I wasn’t self-conscious about it, but now that I look like this from being pregnant, I really want to point out that I’m pregnant. I might have to buy a t-shirt!

I know that’s me being silly, but still. It’s an interesting place to be.

Well, Squidy, you’re around 3cm big now, which is really still very tiny, and you have fingers and toes. Your palate and mouth are forming, and yourÂ  brain is growing at a rapid rate. I really hope it’s all going well in there my darling child.

Love you so much