Can you believe we’re 21 weeks into this thing already?

I look fat, not pregnant. Thanks for that. I have to unbutton the top of my jeans, but so far that’s about it. No maternity clothes â€“ for which I’m grateful. I’m dreading forking out for winter maternity clothing I’m going to use for just a few months. So maybe it’s a good idea that you’re small.
I am so tempted to buy a shirt that says â€œI’m not FAT, I’m pregnant.â€ Like this: 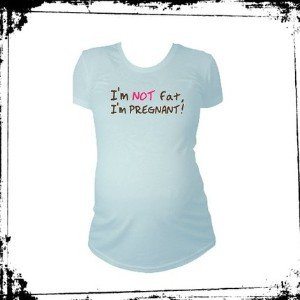 Then maybe I’d feel better about being so tired all the time too.

But then there’s a lot going on in our lives at the moment. I’ve launched Little Bliss– my new company. I feel a bit guilty, actually, because Ameli had two years of my full time attention. If I’m lucky you’ll get two to four hours a week while she’s at nursery. But it’s okay. You’ll have a sibling who’ll hopefully adore you to dote on you too. Ameli didn’t have that.

So, some exciting news: because you’re so small, I guess, I’m not really feeling you kicking much yet â€“ but I’ve been feeling you more and more this week. It’s like our own little secret at the moment. No one else has felt you, just me. Ameli puts her hand on my belly every now and then to try to feel you, but so far you’ve only kicked me. I was lying down on the bed a few nights ago when you kicked the laptop. It made me giggle. I look forward to feeling you moving more.

I’m still battling the nausea , but I’m still only taking one tablet a day, so the sickness really only comes over me at night now. I haven’t vomited in a few weeks, which has been nice, but my diet isn’t great either. I’m primarily eating mashed potatoes and chocolate at the moment. Which, funilly enough, is what I was eating with Ameli just before I started feeling better â€“ so maybe that’s a good sign, right?

According to ‘them’, you’re about 27cm long at the moment, which I find really hard to imagine. Where ARE you? I mean… 27 cm of baby? Where?

Anyway. They also say that you can hear what we’re saying now, and that we should talk to you. Ameli’s really cute. She kisses my tummy and says ‘Hello, Baby’. I’m hoping that bodes well for your future relationship. She lies on my belly to try to get in there to be with you. It’s very sweet. I don’t know if she really gets it yet, but so far, she’s being sweet.

Well, darling child, that’s it for now. I guess as you grow and the weeks add up I’ll have more to tell you. For now, we’re in exciting times, and I love you.

P.S. I found this video last time I was pregnant, and I loved it so much, I thought I’d share it again… it makes me tearful in a happy way.