Wow – the last time I posted our pic of the week was in September! I can’t believe a whole month has passed. You should know, however, that in that month, I’ve ‘owned’ three different computers. My laptop met the floor in a toddler induced incident, so there was nothing for it but to buy another – which lasted 9 days before blue screening on me, and being replaced by the one I’m using right now…. nine days ago.

As a result I’ve had a lot of time ‘catching up’ with technology, and losing a lotÂ of data – primarily as I don’t have the Â£80 they want to get everything off my old laptop for me!

Anyway, I do have a few pictures for you from Week 43 though…

Ameli and I went for a drive one day, and happened upon this museum in a town called Basingstoke – Milestones Museum. We had a lovely day out, in the end and the staff were simply fantastic. Basically it’s ‘Basingstoke’ through the centuries… or at least bits and pieces from many. Â My favourite part was the sweet shop set in world war two era where you could ‘buy’ your weekly ration of sweets, complete with signed off ration card and everything! Rather sweet – no pun intended.

Ameli was intent on going on the bus – an old Routemaster style – so one of the staff opened it for us so she could have a clamber around, but her absolute favourite was the post office where she could post letters into a talking post box, take ‘money’ behind the counter and give stamps, drive the postal delivery van, and finally, deliver the mail. Â It was a drama and a half getting her away from there in the end. She simply loved it. 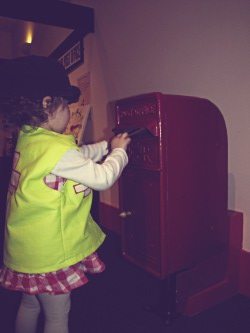 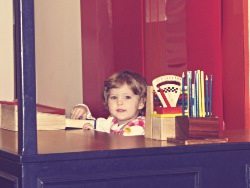 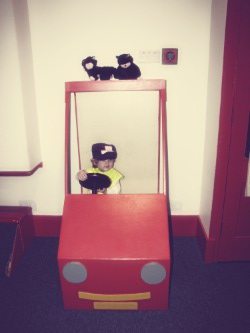 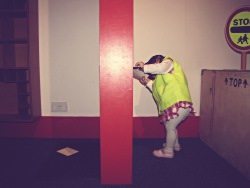