‘ and in the first chapter Sarah Chana Radcliffe talks about the 80/20 ratio of how we talk to our children.Â  She says:

Since reading this, I’ve been remarkably conscious of how I speak to Ameli, and what I say to her, and how quickly my 20% quota runs out â€“especially on commanding, supervising and instructing. 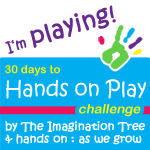 Now, I spend a lot of time with Ameli, but how much of it is quality is debatable. We do a lot together â€“ go to playgrounds, play groups, soft play, for walks, to the coffee shop and so on, but I don’t often play with her, even at the park or soft play â€“ it’s usually more me watching her or talking to her. Neither of those are bad things either, but they’re not always as interactive and dedicated attention as play would be.Â  I have said before that I don’t really know how to play, and in secret I would admit that I find it boring, and imagination isn’t my strong point.Â  But I know that I’d love to learn to play, if only someone could teach me, because I realise that in play, and in playful parenting, there’s a lot more opportunity to utilise those good-feeling interactions in every day ways.

And then someone came along who could (maybe).

Anna, from The Imagination Tree, and Jamie from Hands On: As We Grow have set up a project called 30 Days To Hands On Play, and I’ve decided to try to participate as much as I can. I can’t promise I’ll take part every day or with every challenge, but I can promise that I’m going to try.

For me, and for my children.