Yesterday I explained about 30 Days To Hands On PlayÂ and how I really want to learnt to use play to improve the quality of the time I spend with my daughter.

Without further ado, here are the challenges for Days 2 and 3.

We’ve never built a fort before, but it’s something my brother, sister and I used to do a lot of children. I know a time will come when Ameli wll build her own using her own ideas and imagination, but for this challenge I popped two blankets between two sofas and we climbed underneath. Really it was used more as a tunnel than a fort, but you can see by the face that she was loving crawling through.

Being pregnant I didn’t really crawl around too much – but I engaged with her, played with her and we had a good giggle together. 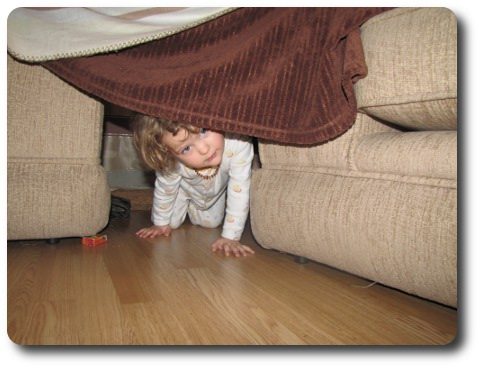 Lego/Duplo are really a Daddy/Ameli thing in our house and have been from the very first Duplo blocks when Ameli was 12 months old.

A friend bought Ameli these big blocks for her birthday though, so today we unpacked them and built towers, using all the bricks to see how high we could go before pushing the tower over and starting again.

By this time it was about 25 minutes in to playing together and I was starting to feel a bit bored, but I tried to refocus and help Ameli build, but then I realised I was ‘instructing’ (one of the 20% “bad feeling” language uses) again.

I took a deep breath, and tried to let her lead the play… something that’s going to take me time to learn, but I’m working on it. 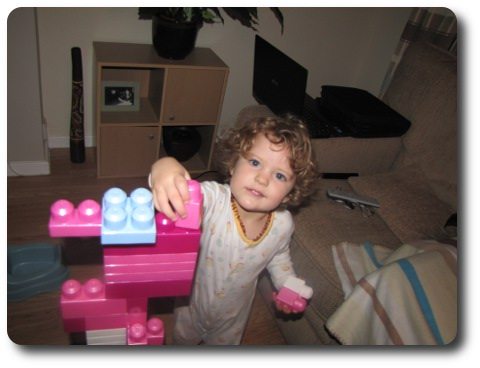 Would you like to join me in 30 Days to Hands on Play? I’m pretty sure it’s never too late to start!