You’re a proper two year old. People ask how old you are, and I say two, and I hate saying two because â€˜two’ can be anywhere from two and one day, which is still my baby or two and 11 months, which seems so grown up. So when people ask, I say you just turned two in October. You’re still on the â€˜baby’ side of two. At least you are to me. 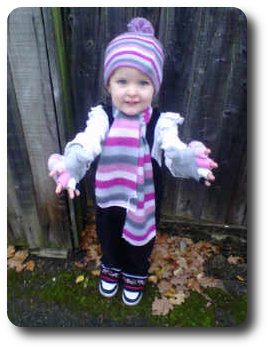 To the rest of the world you’re pretty grown up. You’re independent, confident, and outgoing and people regularly comment on how clearly you speak. You love talking to adults â€“ a sign of an only child who has spent a lot of time in adult company, to be sure. You’re more comfortable with adults and older children than you are with children your own age.

While this bothers me slightly, I also recognise it: I was the same for much of my childhood.

You have started including the baby in your thinking. The other day you were drawing and you told Daddy you were making a house â€˜for Daddy, and Mommy and Ameli and the Baby’. It did melt me a bit. I’m thrilled to know that you understand that there’s a baby comingâ€¦ although I don’t think you get the impact it’s going to have on all our lives.

You sometimes kiss my belly, or I have to lift my top so you can talk to the baby, or feel the baby. It’s all very cute.

You have been really clingy on and off throughout this month too, however, and I’m not entirely sure why. I don’t think it’s baby related, specifically, but you’ve been much more mama centred this month than daddy. In fact, sometimes you’re quite mean to Daddy in your attempt to get away from him and to me. But I trust it to be a passing phase.

We’ve had some progress in tooth brushing this month. We bought you an electric toothbrush and stickers, and whenever you brush your teeth, you get a sticker to stick on your toothbrush. It’s working really well â€“ you often remind us that you need to brush your teeth.Â  The same only partly works for the potty though. In fact it’s quite funny â€“ one afternoon we decided to try some potty time, and you sat on the potty asking for glass after glass of water so you could wee and get a sticker! Not quite how it works! When you got tired of weeing-for-stickers we left you nappy free and there were more accidents than not. I don’t really understand it, because you do Â know what’s going on, but you just don’t seem interested.

Never mind. You crawled at four months and talked at 15. Maybe it’ll take you longer to potty train, but you will, eventually.

We’re coming up for Christmas and whether I wanted to expose you to Santa and all that or not, it has happened. You came home from playschool all awash with excitement over Father Chrithmas and Chrithmas Trees. I’ve decided not to do the whole â€˜Santa’ thing with you, but I’m not too sure how we’ll do it all yet. Fortunately we pretty much still have a year before you really start questioning.

You did make me laugh happily though, when we put the Christmas lights up in the lounge. They are chaser lights so they twinkle on and off and then chase up and down the stream and I asked you what the lights were doing. You confidently responded: â€œThey’re dancing Mommyâ€.Â  I thought that was precious.

Nursery, which is actually playgroup, but you call it nursery, is going really well. You love going and rarely want to leave, so that’s good. We’re changing your days next year so we can take you to forest nursery one day a week so you can spend a bit more time getting to know nature, but you’re active and doing things every day, and we’re always out and about. It’s exhausting for me, but good for you.

I want to try to move you back into your bed again â€“ you’ve been in ours since our trip to South Africa, and I think it’s time we got you sleeping on your own again. It would be especially useful when the baby comesâ€¦ but we’ll cross that bridge when it happens.

You have an incredible memory. Things I hardly noticed you’ll recall a few days later, then it’s just up to me to play catch up with your thoughts and imaginations. For example, we’ll seeÂ  a really odd looking hat in a shop window. Three days laterÂ  you’ll hold a cloth or book or something to your head and start talking about this hat â€“ the one we saw days agoâ€¦ It’s wonderful. You’re so clever.

I think I’ll leave it there now darling.

I love you madly.

Tags: Letter to a Ameli
Categories: Letters to Ameli On Mama's Mind

Letter to a Nine Month Old
Pregnancy 22 Weeks: Abnormality Scan
Dear Ameli- Letter To A 19 Month Old
If I Should Die…